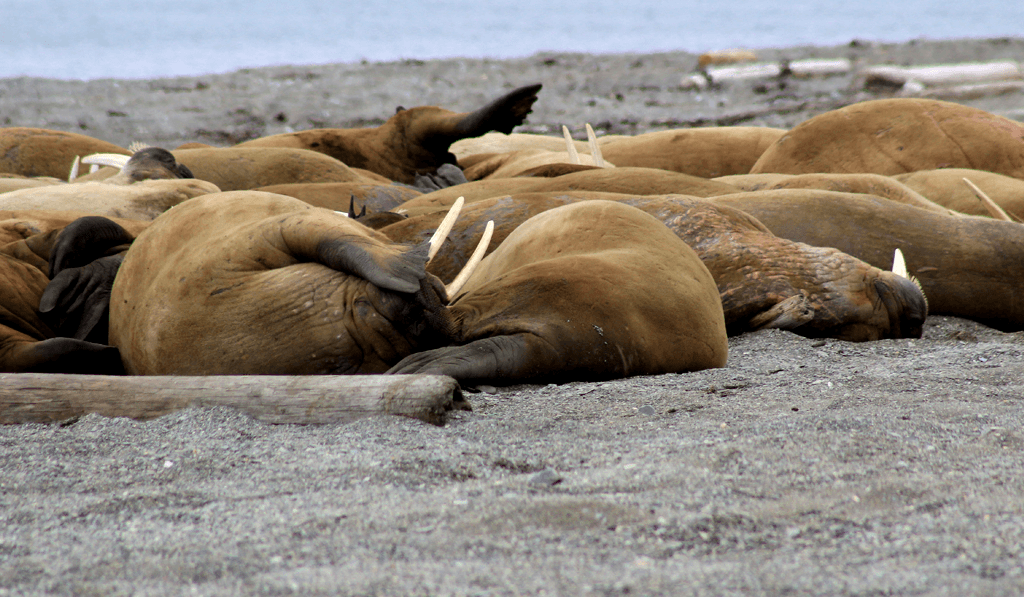 Before I moved to Australia, 3 years ago, I lived for more than 40 years in Holland and travelled to most European countries. Why didn’t I go earlier to Svalbard/Spitsbergen?? A missed opportunity, because this is a perfect destination for all the nature and wildlife lovers.

After a one night stay in an airport hotel in Oslo, I took a morning flight to Spitsbergen. After about 3 hours, I arrived in Longyearbyen and transferred to the Radisson Polar hotel. I left my luggage in the hotel so it could be delivered to my cabin on board the MS Expedition. With the few hours left I walked around Longyearbyen, bought the last things I might need for the trip, had lunch and shot my first photos. 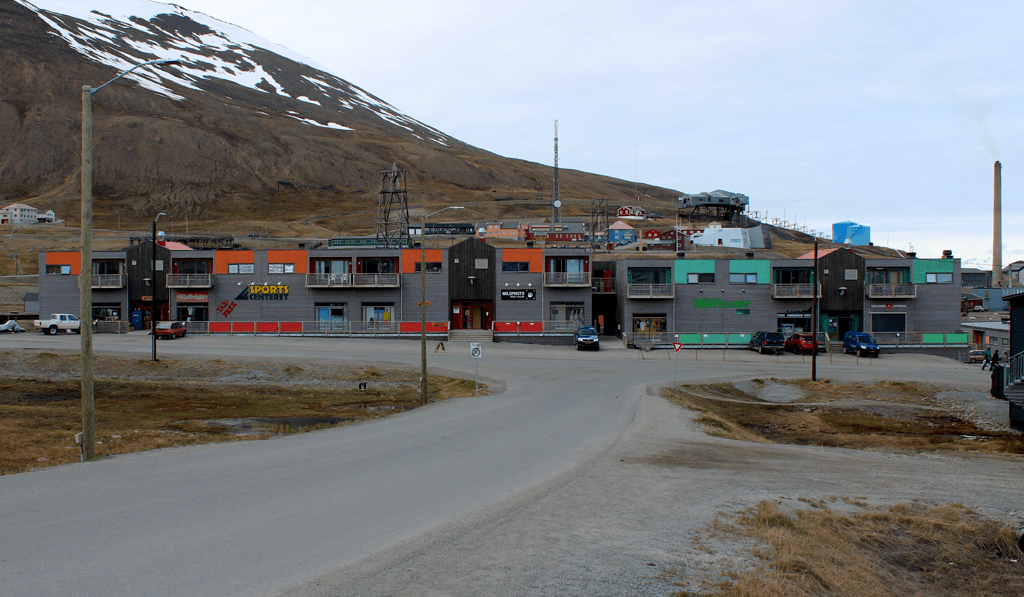 To board the ship we had our first Zodiac cruise. My bag was already in front of my cabin and I was sharinf the cabin with a cameraman from Taiwan who was on the cruise to make a documentary. We were all welcomed by the expedition team in the Discovery lounge and after some pizza snacks and sandwiches, we gathered for the safety briefing and life boat drill.

Following a delicious welcome dinner the dining room, we received our expedition parkas. The arrival was completed by musician Adam who played for several hours in the Polar Bear lounge for those who couldn’t (the sun doesn’t go under this time of the year), or didn’t want to go for a sleep.

The first morning, after breakfast we attended a briefing to familiarise ourselves with the ship and got a lecture about the wildlife we might see around Svalbard. After lunch we arrived at Magdalenefjord. Because of the great weather we had that day, it looked stunning. When we landed we saw a cemetery area for whalers and the remains of blubber pots where they rendered the whale blubber into oil. The sandy beach and sunny skies made it a perfect place for some of us to have a Polar Plunge. Brave people to dive in the frigid water! After we threaded back through the fjord’s narrow entrance, we made a scenic cruise through the narrow Sorgattet Channel and on through Smeerenburgfjorden, famous as a Dutch whaling centre in the 17th century.

On Sunday we didn’t have the clear blue sky, only a thick fog. This only allowed us to see about 100 metres and that way we couldn’t move further up North as it was too dangerous with the pack ice. Pack ice is where polar bears hunt for their favourite prey – seals! Unfortunately, the pack ice we had found was not in large enough pieces to be preferred haul outs for seals, and without seals the ice was not of interest to hungry bears.

In the afternoon geologist Julia gave us a lecture on Sea Ice and Glaciers, to help us better understand the structure and nature of ice. Later we were alerted to fin whales seen feeding around the ship. 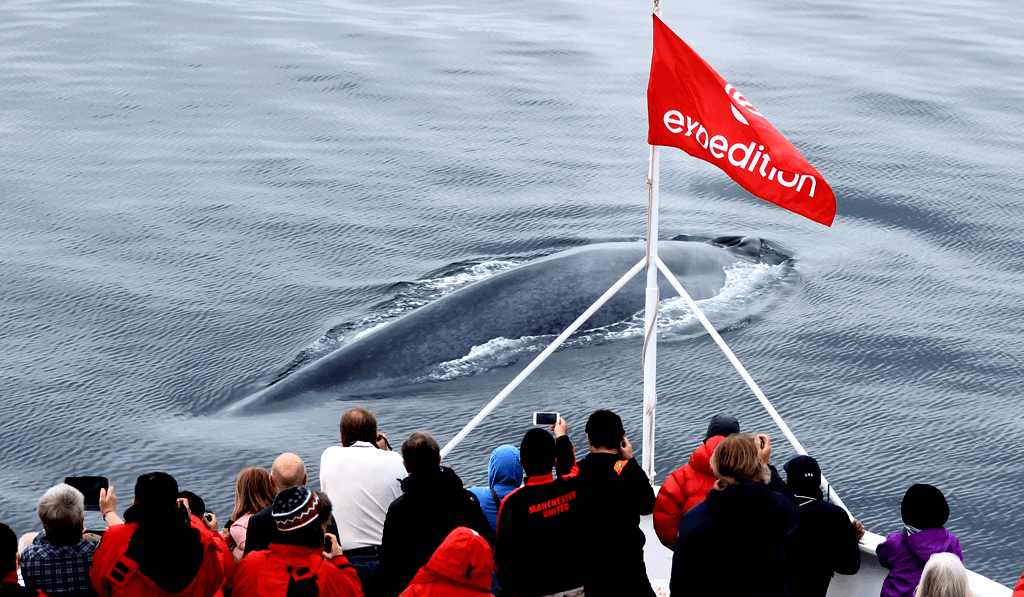 On Monday we were still sailing through thick fog banks around the ship. We were making our way in the Hinlopen strait towards Torrelneset. As the fog was thick as pea soup, the captain had made the decision to change our destination hoping for better visibility. We stayed for a couple of hours into the fast ice in Wahlemberg Fjord to see if we could spot any Polar bears, but none seemed to be in the vicinity. So after lunch we made our way north towards the bird cliffs of Alkefjellet. On the way the visibility improved and when we arrived we made our way with the zodiacs for a cruise along the magnificent cliffs. It was buzzing with tens of thousands of Guillemots, kittiwakes and gulls. Also present were 2 Arctic foxes that were obviously taking advantage of a ready food source.

On Tuesday we awoke to breakfast with the ship parked into the fast ice at the very end of Woodfjord. Around us were high clouds, great light, and snow covered mountains with bare areas of red rock reflecting on the water. The view from the bow was of an extensive area of fast ice with bearded seals scattered over the ice. After breakfast our ship slowly pulled out of the fast ice for a ship’s cruise along the spectacular coastline of Woodfjorden with bright skies and clear mountain views.

We went for a zodiac cruise around Goose Island (Andoyane). We were able to spot pink footed geese, long-tailed ducks, arctic skuas, arctic terns and many more. With our zodiac we were lucky to get visit from a walrus. 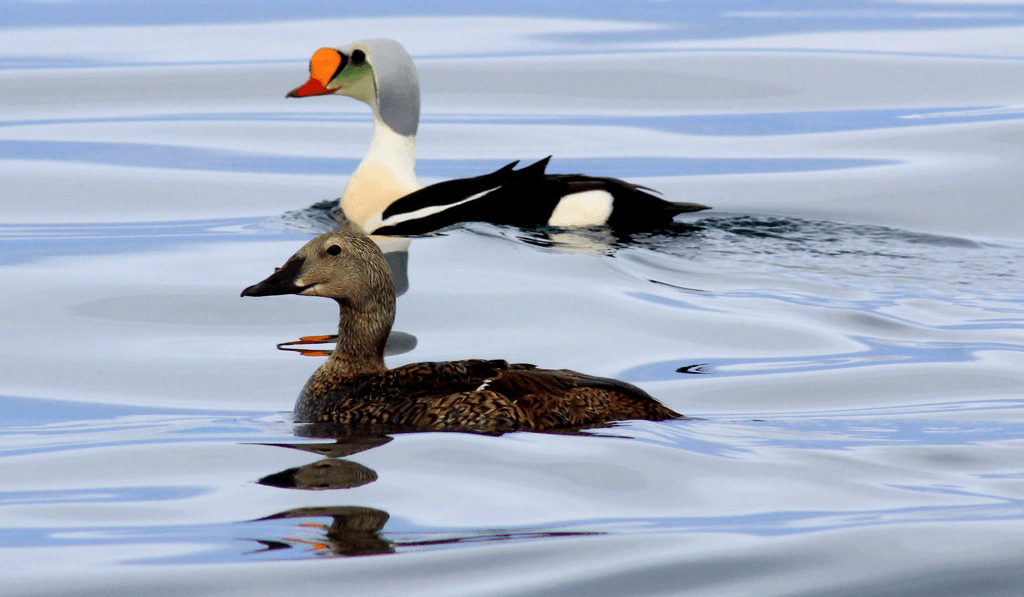 On Wednesday we found us at Lilliehookbreen in Krossfjorden for our zodiac tour. Lilliehookbreen is about four miles long and has a height at the face of some fifty meters. The glacier had been quite active, as attested by the amount of brash ice floating near the face; our zodiac was lucky enough to witness a major calving. Unfortunately it happened too fast to shoot some nice photos.

In the afternoon we did visit Ny Alesund, formerly known as King’s Bay when it was founded in 1919 by the King’s Bay Coal Company from Alesund in mainland Norway. In this small settlement of just around 200 summer residents, we visited the most northerly Post Office in the World, saw the Amundsen statue as well as the most northerly steam train. The primary activity these days, after the closure of the coal mine in 1962, is that of research and we noted Swedish, Chinese, Korean, British and other research stations.

After we returned to the ship, and during the customary recap and briefing, the ship repositioned further into Kongsfjorden for the treat of the evening, an outdoor BBQ dinner served by the great galley staff!

Thursday was the last full day on this great ship. With the zodiac we cruised in the morning along the glacier fronts between the bergie bits and small brash ice. We spotted a bearded seal resting on one of the ice floats.

After lunch we landed on the beach of Poolepynten and took a lovely walk through the peaceful landscape, which greeted us with the first blossom of Svalbard, the purple saxifrage. Wildlife ashore included Arctic terns, red-throated loons, red phalaropes, purple sandpipers, and two reindeer. But they all stood small compared to the walrus haul-out of 40 animals. We got close enough to not only enjoy their calming and slightly comical way of rest, but also smell their unique odor without disrupting their slumber. 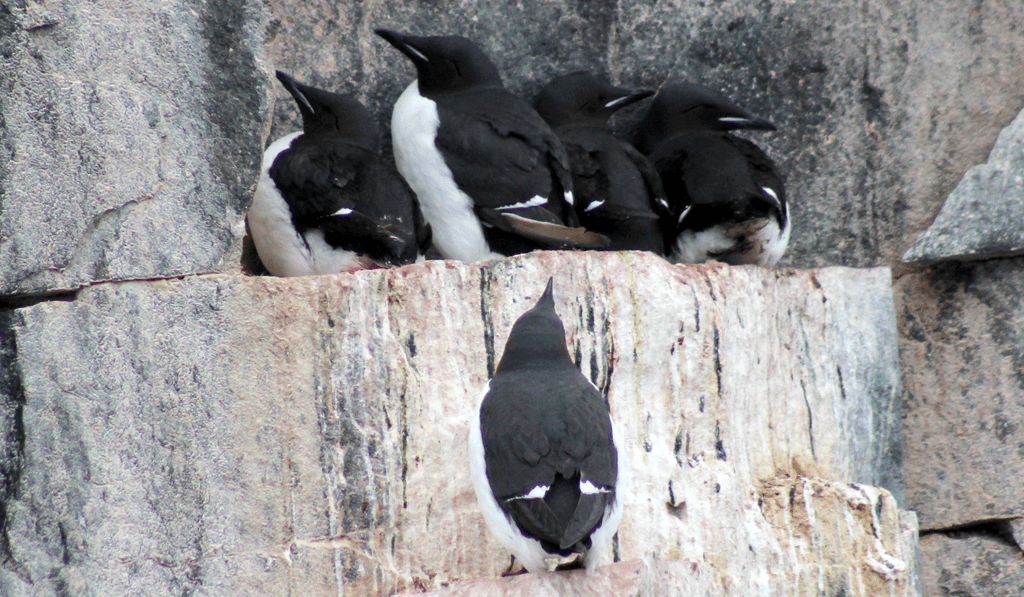 The last evening we had a captain’s farewell cocktail in the lounge, where we also met the people ‘behind the scenes’ and got the chance to thank them with a long round of applause. After seeing some blue whales close to the ship, we had our last dinner on board before resting for a few hours in my cabin as I had to disembark at 2.45am to catch my flight back to Oslo.

It was a missed opportunity to visit this destination earlier, but I am so glad I was able to visit it now. And while unfortunately I didn’t manage to glimpse the majestic Polar Bear, this didn’t diminish my experience at all. Wildlife is always unpredictable in Polar regions and Polar bears are notoriously hard to spot. The cruise before me managed to see several of them so it seems I was just unlucky as the best time is generally between May and July. The Arctic is such a remote and isolated area with a beautiful scenery and a great variety of wildlife it is simply stunning. And when coupled with the hospitality you experience on board and the experienced tour guides on the MS-Expedition, you will get a trip of a lifetime. Don’t wait any longer!