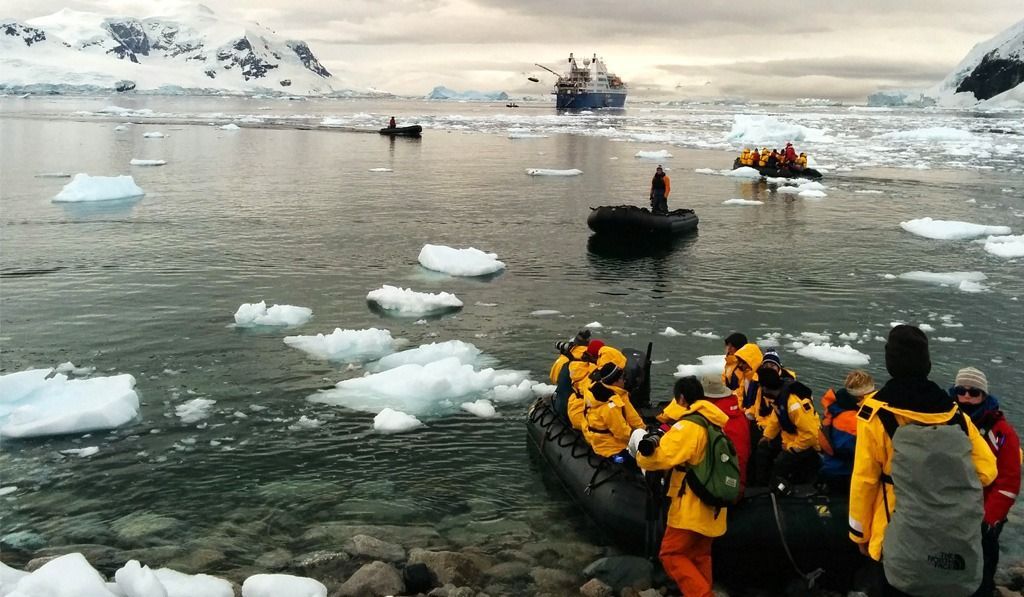 I have just returned from an 11 day Antarctic cruise aboard the Ocean Diamond and I can’t praise them enough. They were professional, informative and friendly. I felt like we were part of their family and they couldn’t do enough for us.  The expedition staff were all very friendly and enthusiastic, especially about their areas of expertise (geology, ornithology, etc.) and even though most had spent the last couple months almost exclusively on the ship, they still seemed very excited about everything we saw and did.

We had a pretty good Drake Passage crossing both ways.

189-passenger Ocean Diamond – One of the major benefits of this vessel is the Diamond saves up to 12 hours on the Drake crossing, giving you more time to enjoy Antarctica.  So we actually arrived half a day earlier than planned, so we had an extra afternoon landing. We did have to leave a bit earlier at the end then we had planned, so we could miss the storm going back to Ushuaia, so it worked out well that we had the extra landing at the start.

The ship is extremely comfortable with large spaces, a club lounge, observation lounge, polar library and excellent restaurant, with 2 different setting areas.  Breakfast and lunch are served buffet style and dinner is sit-down restaurant-like with a menu handed to each guest which is different each day featuring choices of two soups, two salads, two entrees and one or two or more deserts.

Stabilizer – stabilizers on the boat that they used during the Drake Passage so it didn’t roll as much as other boats the ship is big and stable. I didn’t feel the 180 passengers was an issue since we rarely see everyone at the same time.

My regular haunts, besides the dining room on level three and the bar, were the auditorium on level five (for lectures and yoga) and the lounge on level four. It had hot drinks tea and coffee available all day. The bridge was on level six and often open to visitors. Level six also had a small gym and pool/hot tub which wasn’t used filled on our expedition, so you couldn’t use this after the Polar plunge!

I stayed in a Twin window Cabin 504 which was very spacious! I was sharing with the Chinese interpreter who had been to Antarctica over 60 times so she was a very interesting person to chat to! There are 3 draws each in-between the beds, so you have plenty of room and space to store all your belongings with big double closets to store all your gear to dry. There is an also a small desk and TV/DVD players in all the rooms. We had a great view from our window. The first day we arrived I saw 3 humpback whales right outside my window it was an amazing experience!

Note that a few “window” cabins may have partially obstructed views, for example, a portion of a life boat on the deck or a view may be obstructed when looking down.

The vessel offers a variety of accommodation options, from suites with balconies to cabins with portholes for single, double or triple shared use.

Highlights of the Ocean Diamond include a bar staffed by a professional bartender, theatre-style auditorium, clinic with licensed doctor, photography program including the services of a resident photography instructor, Polar Library containing a large collection of polar books & DVDs, Massage & Wellness program offering yoga classes, aromatherapy treatments & massage therapy. A passenger elevator makes navigating decks easy, and chefs pamper you three times daily with delicious meals. There is one main restaurant, a smaller dining room (for private functions, and a spill-over venue if the main restaurant is too full), a club room (freely offering 24/7 hot beverages and water), an observation lounge offering panoramic views of the sea, a large main lounge (theatre style auditorium) that can house all passengers, a gym, massage room and yoga wellness program on offer and a small shop where you can buy everything, things that you think you might forget and can’t bring you will find, from memory sticks, batteries, jackets, socks, waterproof backpacks, lots of souvenirs and even a go pro!

The captain on the ship was great at navigating (we particularly saw this in the Lemaire Channel). His open-door bridge policy was very welcoming. The bridge was a good place for wildlife spotting (various species of birds, seals, penguins and whales).

Hot Tub – This wasn’t operating on my expedition which would have been nice to sit in, especially for those who did the Polar Plunge!

Gym – The gym is small and the ceiling is low so not so good for someone tall as they would hit their head while on the treadmill. Laundry – The ship’s staff will do laundry for you at a cost.

Optional activities (additional cost) include kayaking, camping, snowshoeing and hiking, cross-country skiing and mountaineering. New addition of stand-up paddle boarding is available on Ocean Endeavour ship which is a sister ship to the Diamond, which I was lucky enough to see the first test run for this which was a success and a very cool experience.  Advanced reservations are required as space is limited.

Logistics off getting off and on – The International Association of Antarctica Tour Operators (IAATO) regulates the number of people that can visit any particular site at one time. The limits typically range between 60 and 90. Thus on a ship as large as the Ocean Diamond, half of the ship must cruise around on Zodiacs looking for whales and seals while the other half pokes around on land. It typically took between 25 and 35 minutes of lining up to get off the ship and getting back on was slow as well due to the need to wash one’s boots at one of just a handful of boot-washing stations.  A typical morning or afternoon outing from the Ocean Diamond entails 30 minutes of waiting, 1.5 hours on land, 1.5 hours in a Zodiac and then you swap around.

The lectures covered everything from Antarctic explorers, the history of getting to the south pole, Birds of Antarctica, Penguins, Seals, Whales, Geology, Climate change and pretty much anything else along with regular recaps of the day’s events so everyone realized what they had seen over the day.

The jackets were yet another of the pleasant and uncommon perks provided on the Ocean Diamond. The jackets were of the large, multi-pocketed, bright yellow, extremely warm, wind-proof, water-proof, sexual attraction-proof, bright yellow parka variety that were highly functional and perfect for our needs (many pockets to hold gloves, binoculars, cameras) and the conditions we would face (extreme cold, gale force winds, pelting rain, splashing waves). And the best part is they were ours to keep! So long as you had enough room in your bag to take them home. The Parka you get to keep and also includes a very warm fleece liner that you can zip off and wear separately

Boots are included to hire on the ship but you must bring your own waterproof pants which I think would have been good to include this but you can also hire them from Ushuaia and return as long as your flight is later in the day so you have time to drop them off.  Absolutely no dress code! It’s an expedition. Even at meals you could get the call that whales are beside the ship so you are generally in your outdoor gear with a fleece or parka handy along with your camera! You don’t want to miss that sight because you have to sprint to your cabin to get changed. Take something adaptable and lightweight that can become some kind of fancy dress outfit – there is always at least one or two theme evenings held – generally on the spur of the moment – so not like a big cruise ship when you are told your themes months in advance.

Meals – Breakfast and lunch are served buffet style and dinner is sit-down restaurant-like with a menu handed to each seated guest which is different each day featuring choices of two soups, two salads, three entrees and two or more deserts.

I told them in advanced that I was a vegetarian and they always made sure that I had vegetarian options. Drinks – Alcohol was quite expensive approximately  US$8 spirits, wine US$7-7.50 and beer US$5-6 .  Tea, coffee is always included at any time. They have afternoon tea everyday also, not that you could fit it in but it was nice to come back from being on the ice to have a hot cup of tea. It’s safe to say you will not starve on the Ocean Diamond. I was amazed how they were still serving fruit at the end of the 2 weeks. Can you imagine the amount of thoughtful planning it took to feed 333 people for 2 weeks?!

The ship offers Wi-Fi Internet and you can buy an internet card for about $50 for 30 mins depending on what you are looking at etc and how much data it takes up.

We had a special guest on our trip, Dr. Tom Hart who runs the Penguin Lifelines project at Oxford University and the Zoological Society of London, through which he monitors Antarctic wildlife using camera trapping, volunteer photos and population genetics. Polar travellers love seeing penguins on their Antarctic expeditions, so it was great to see them support an initiative to ensure we can continue to meet and interact with penguins for generations to come.

To top off the trip, we actually saw a emperor penguin on the Antarctic peninsula  which is very unlikely to see.  We were cruising on zodiacs for about an hour then we heard over the radio that the kayakers had spotted an emperor penguin, so we shot over there so fast, the wind in our faces to get there as fast as we could, and there he was, standing tall and proud with 2 Adelie penguins next to him which was strange they were together. There were about 10 zodiacs around him but it didn’t seem bothered at all. It is so rare to see emperor penguins down on the peninsular as they are mainly found near the Weddell sea, so we were very very lucky! I had to pinch myself I couldn’t believe we saw one, one my dreams to see one and it came true!