In the Wake of Eric the Red – Greenland to Iceland

Join us on an expedition cruise from Kangerlussuaq to Reykjavík, which follows the same maritime course set by Norse settlers over a thousand years ago. In the Disko Bay, we will experience the small own of Qeqertarsuaq, make a stop in front of the huge Eqi Glacier, and walk to World Heritage Site of the Ilulissat Icefjord. Further south along the west coast of Greenland, we will visit the capital of Greenland, and make a landing by our fleet of Zodiac tender boats at Eric the Reds settlement at Qassiarsuk. Passing through the dramatic Prince Christian Sound brings us to the heavily glaciated east coast of Greenland, where we will make a landing in silence of the undisturbed Skjoldungen Island.

Home » 11 Day Ocean Albatros: In the Wake of Eric the Red – Greenland to Iceland 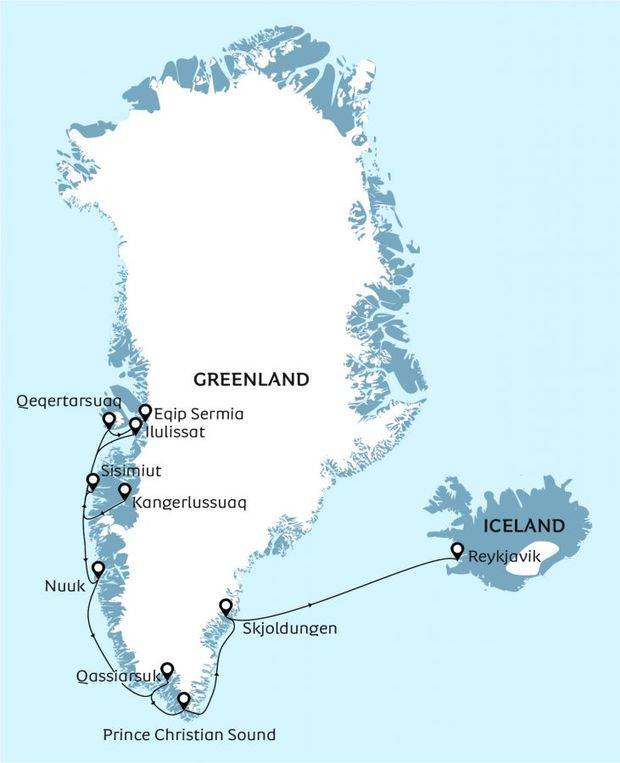 Day 1: Fly from Reykjavik or Copenhagen to Kangerlussuaq and Embark

In the afternoon we board our chartered flight in Reykjavík, Iceland or Copenhagen, Denmark, bound for Kangerlussuaq in Greenland (both flight options are available, please contact us for more information).

Upon arrival in Kangerlussuaq, we will be transported to the small port located west of the airport, where our ship, will be anchored. Zodiacs will transfer us the short distance to the ship, where you will be checked in to your stateroom. After the safety drill, you will enjoy a dinner as we ‘set sail’ through the 160-kilometer Kangerlussuaq fjord.

After breakfast, we arrive to the colorful town of Sisimiut, where we will get an idea of what modern Greenland looks like. With 5,400 inhabitants, it is considered Greenland’s second ‘city’. People have lived around Sisimiut on and off since 2,500 BC.

In 1756, Count Johan Ludvig Holstein, established a colony here and called it “Holsteinsborg”. The oldest part of Sisimiut’s historic quarter features town houses from this “Holsteinsborg” era, and the oldest house in town dates to 1756. One of the most culturally significant buildings is the Blue Church, built in 1775.

Our next sojourn lies on the southern tip of the Disko Island, where we will anchor in a protected natural harbour, which is named Godhavn (‘Good Harbour’) in Danish, while its Greenlandic name, Qeqertarsuaq, means ‘The Big Island’.

Although topographically quite different from mainland Greenland due to the basalt characteristics of the Disko Island’s mountains, Qeqertarsuaq maintains a long, rich history and once served as one of the country’s important economic centres. From the 16th century, the community was relatively prosperous and, in fact, considered the most important town north of Nuuk until the mid-1900s, due in part to the area’s sizeable whale hunting population.

During our visit, we will wander through town, paying a visit to the characteristic octagonal church, nicknamed “God’s Inkpot”, as well as to a local community center that will be hosting a traditional Greenlandic “kaffemik”, which can be best described as a friendly gathering with coffee, cake and traditional dances and music.

As the day draws to a closing, Ocean Atlantic will set a north-easterly course bound for a magnificent natural highlight – the enormous Eqip Sermia Glacier.

Situated approximately 50 nautical miles north of Ilulissat, the Eqip Sermia Glacier is renowned for its jaw-dropping beauty. Legendary arctic explorers selected this location as a base for their studies. One such explorer, the acclaimed Swiss glaciologist Alfred de Quervain, used the location as a base for his expeditions onto Greenland’s inland ice sheet over a century ago.

We will sail as close as possible to the ice’s edge – but at a safe distance to avoid plunging blocks of ice and violent waves that often result from the calving glacier.

Day 4: Capital of the Icebergs, Ilulissat

Ilulissat is possibly the most well located town in Greenland. The name simply means ‘icebergs’ in Greenlandic, and the town’s nickname is rightly ‘the Iceberg Capital’.

In Disko Bay, which is located just off the coast of Ilulissat, gigantic icebergs linger in the freezing waters. These icebergs come from the Icefjord, which is located a half hour’s hike south of Ilulissat. These impressive frozen structures are born some 70km/43,5 miles deeper into the fjord by the enormous Sermeq Kujalleq glacier. This 10km/6 miles-wide glacier is the most productive glacier outside of Antarctica; Whereas most glaciers only calve at a rate of approximately a metre/three feet a day, the Ilulissat glacier calves at a rate of 25m/82 feet per day. The icebergs produced by the glacier represent more than 10% of all icebergs in Greenland, corresponding to 20 million tons/22 million us tons of ice per day!

These facts, together with the fjord’s unforgettable scenery, have secured the Ice fjord a place on UNESCO’s World Heritage List. During the more than 250 years that have passed since the establishment of Ilulissat, the town has steadily flourished. Today, Ilulissat is Greenland’s third largest town, with more than 4,500 inhabitants. The town is very vibrant, welcoming and lively with a wide range of cultural attractions, according to Greenlandic standards.

The legendary polar explorer, Knud Rasmussen, were born in Ilulissat.

On this day, you will also have the opportunity to join a boat trip to the Ice fjord (not included). The journey takes about two and a half hours in total, a great opportunity to take a closer look at the amazing ice-sculpted scenery.

The trip is definitely something out of the ordinary and a great natural experience that you will remember for years to come – but be sure to have warm clothing on!

If a hike or a trip by boat does not present enough excitement, there is also an opportunity to arrange a flight excursion over the Ice Fjord (not included).

In the evening, we will cruise southward from “the Iceberg Capital”, leaving lovely Disko Bay behind us as we part.

During the night, we have cruised north to reach Nuuk in the morning. As we enter the Nuuk Fjord we have fair chances of encountering the area's seasonal visitors: Humpback whales!

The world's smallest capital is in Greenland considered by many a mighty metropolis - a total of 17,000 people live here today, almost a third of the country’s population.

The area has been inhabited back to 2200 BC by pre-Inuit hunters. From year 1000 to 1350 AD, the Icelandic Vikings and farmers settled in South Greenland and in the Nuuk Fjord, while at the same time Inuit hunters of the Thule culture moved south from North Greenland. The Nordic settlers disappeared around 1350 AD, but the Inuit stayed, being far better equipped to hunt and survive in the tough Arctic nature.

Modern history of Greenland began in 1721, when the Norse missionary Hans Egede founded a permanent colony and trading station near Nuuk. In fact, Egede’s main purpose to return to Greenland was to convert the Catholic northerners to Lutherans, but soon after his arrival he realized the Norse had disappeared, a mystery yet unresolved.

In 1979, the Landsting (Parliament) was established in Nuuk, and the town was finally recognized as the country's capital.

In the afternoon, we will leave the capital and continue our southbound journey.

Around lunch we sail into Eriksfjord, which in Greenland is called Tunulliarfik. We throw anchor off Erik the Red's Brattahlíð settlement, where the Qassiarssuk village is today. Here we see, among other things, a reconstruction of Tjodhildur's church, which was the first church on the North American continent. There are also other ruins after the Norse people, which disappeared in the 1400s. Here one can really sense the path of history and wonder why the Norse people suddenly disappeared from Greenland.

It was from Brattahlíð that Erik and Tjodhildur's son Leif Eriksson, about 1000, went west and discovered Baffin Island, the Labrador coast and Newfoundland, before returning to South Greenland a few years later. Around lunch time we sail out of Eriksfjord close to Qooroq Isfjord.

Kap Farvel, or Cape Farewell, is renowned not only as Greenland's southernmost point, but also for its infamous, although mostly seasonal, gale-force winds.

We deliberately opt for a far more comfortable but at the same time more spectacular route, cruising via the inside passage through the Prince Christian Sound. This 60 km long waterway, from the settlement Aapilattoq in the heart of the fjordlands of South West Greenland to the Atlantic in the east.

Todays journey begins with Dronning Marie Dal in the area's northwestern corner to get a closer view of its interesting flora.

The island of Skjoldungen is without doubt one of most beautiful areas in East Greenland. Situated at 63° N, the island is surrounded by narrow, steep fjords and glaciers, and with plenty of the cool, crisp and clean air of the ever present and nearby ice sheet. Still, we will find and experience a lush landscape and a milder climate than most would expect. Acclaimed Norwegian explorer Fridjof Nansen came here in late summer 1888 in search of a suitable ascension point for the first inland ice crossing.

Skjoldungen is also the name of an abandoned settlement, located on the southwest side of the island. Up to 100 people lived here until 1965, and some houses remain.

Our lecturers onboard will make inspiring and enriching presentations about both Iceland’s and Greenland’s history, nature, wildlife and climatology. A captain’s farewell drink and a slideshow of our voyage will also be presented this evening.

As our time in Greenland concludes, we slowly approach the Icelandic capital, Reykjavík, and your Arctic adventure will have concluded.