The Chilean Fjords, with mazes of inland passages, calving glaciers and stunning wildlife, count as one of nature’s greatest wonders. Embarking in Argentinian Ushuaia, we immediately enter Chilean water and head for Cape Horn, the southernmost headland of the Tierra del Fuego archipelago, followed by the passage of “Glacier Alley”, a most fascinating part of the Beagle Channel, where countless glaciers carve their way from Darwin Icefield down to the sea. We continue deep inland and visit some of the most remote and stunningly located fishing settlements in Chile. Roadless Puerto Edén in Canal Messier, and beautiful Caleta Tortel, with houses and walkways built on thousands of stilts. From Puerto Natales we will take a coach trip to sky soaring Torres del Paine, and on the green island of Chiloé we will visit one of Chile’s oldest towns, Castro, famous for its huge wooden cathedral, Church of San Francisco. Putting the fjord labyrinths behind us, our adventure continues towards the Pacific as we cruise north to disembark in Valparaíso. 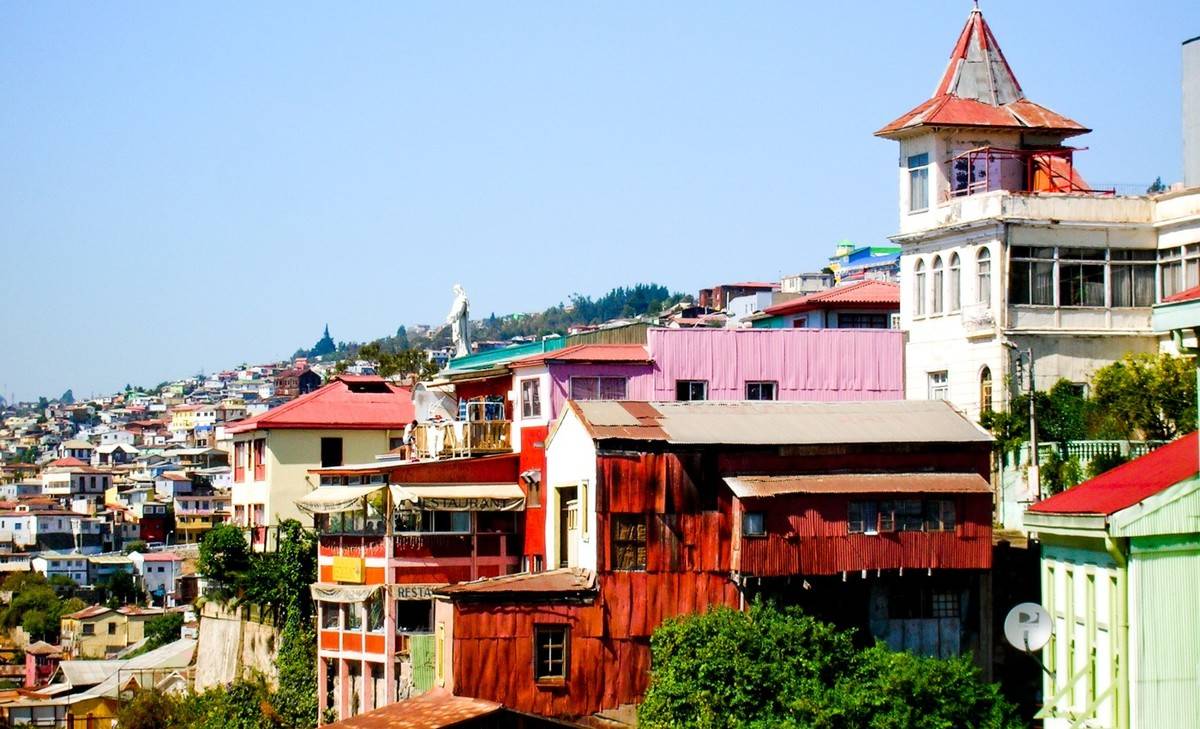 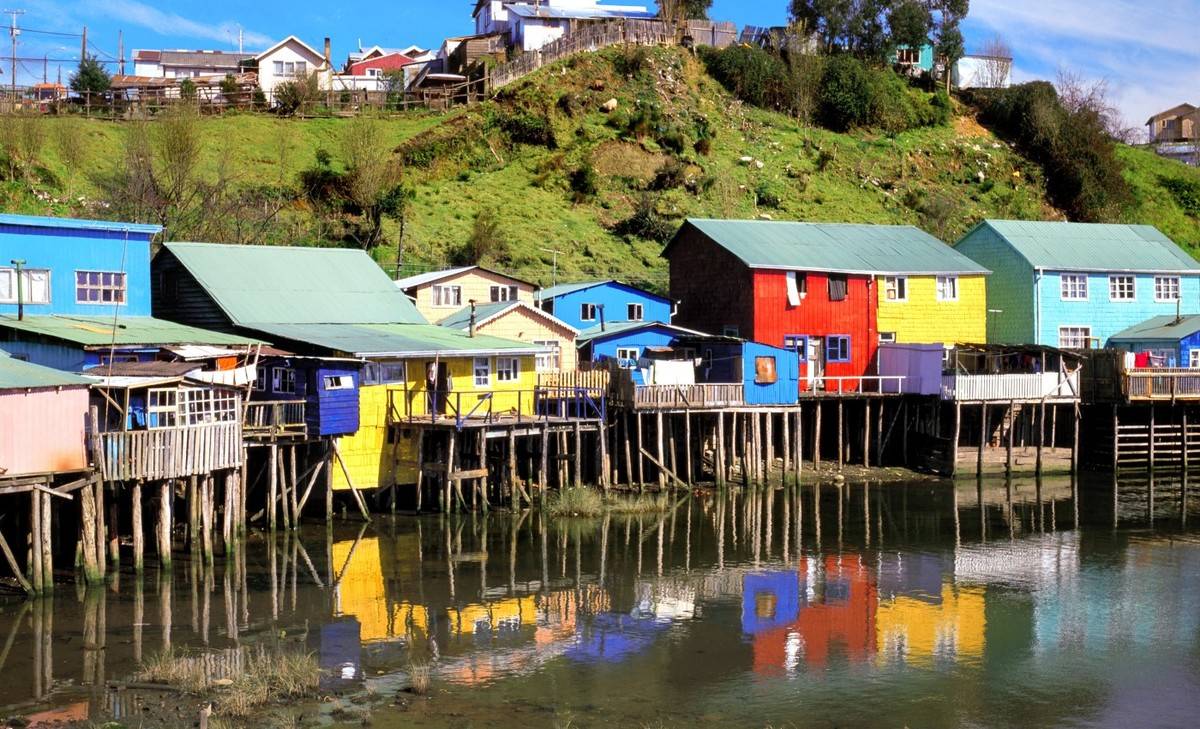 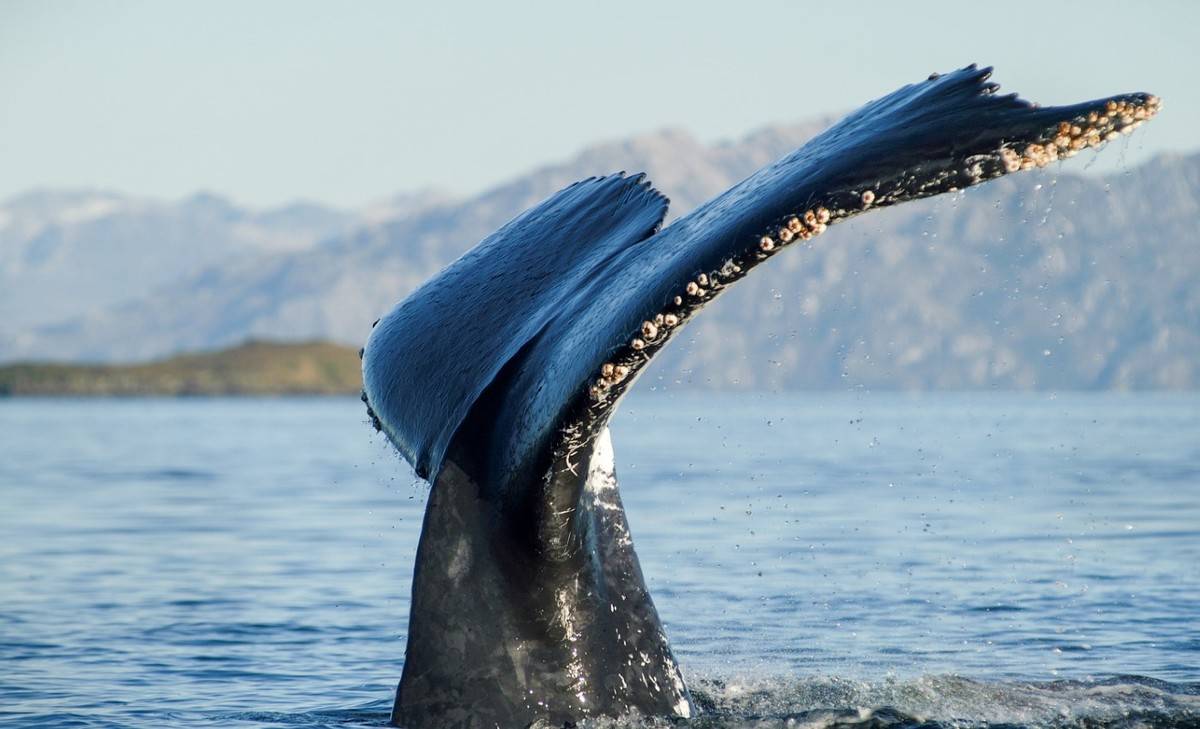 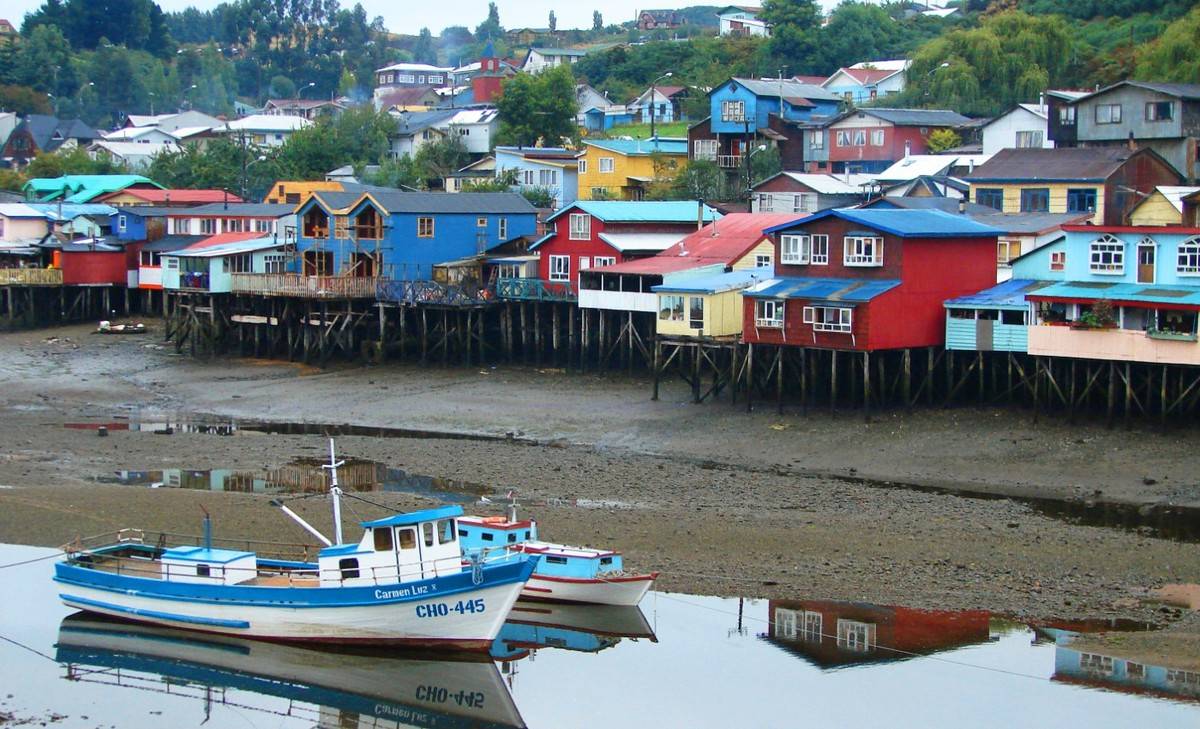 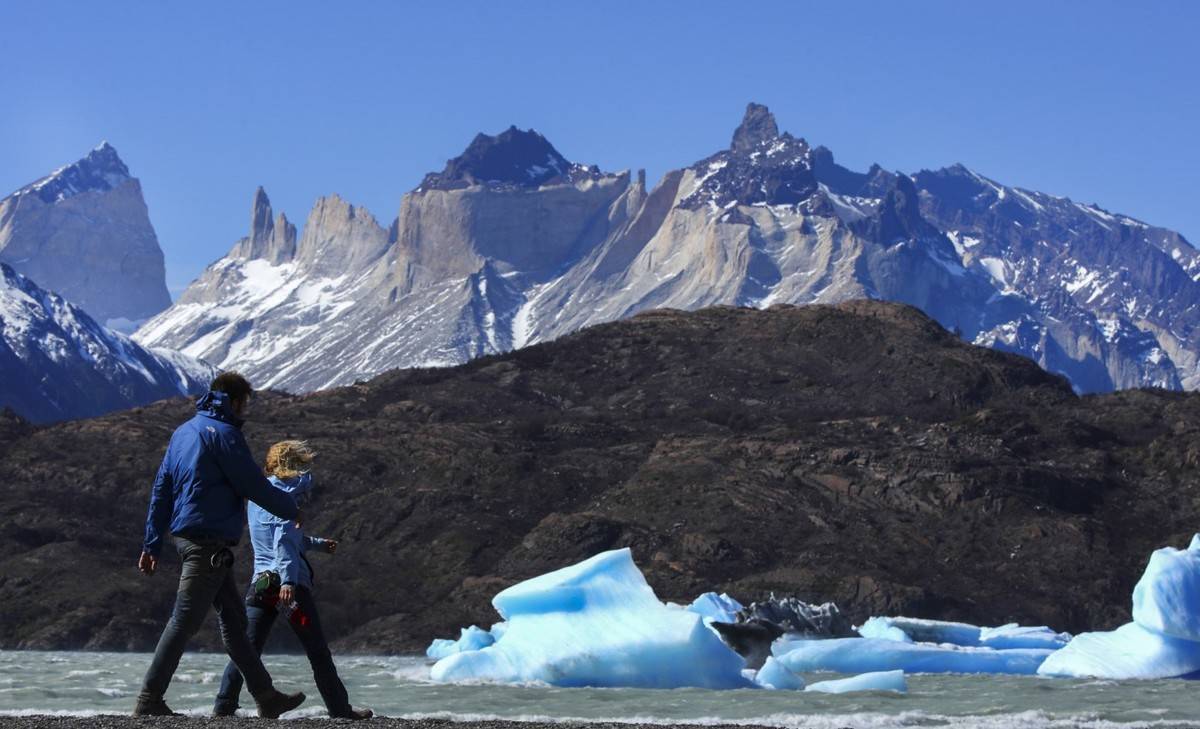 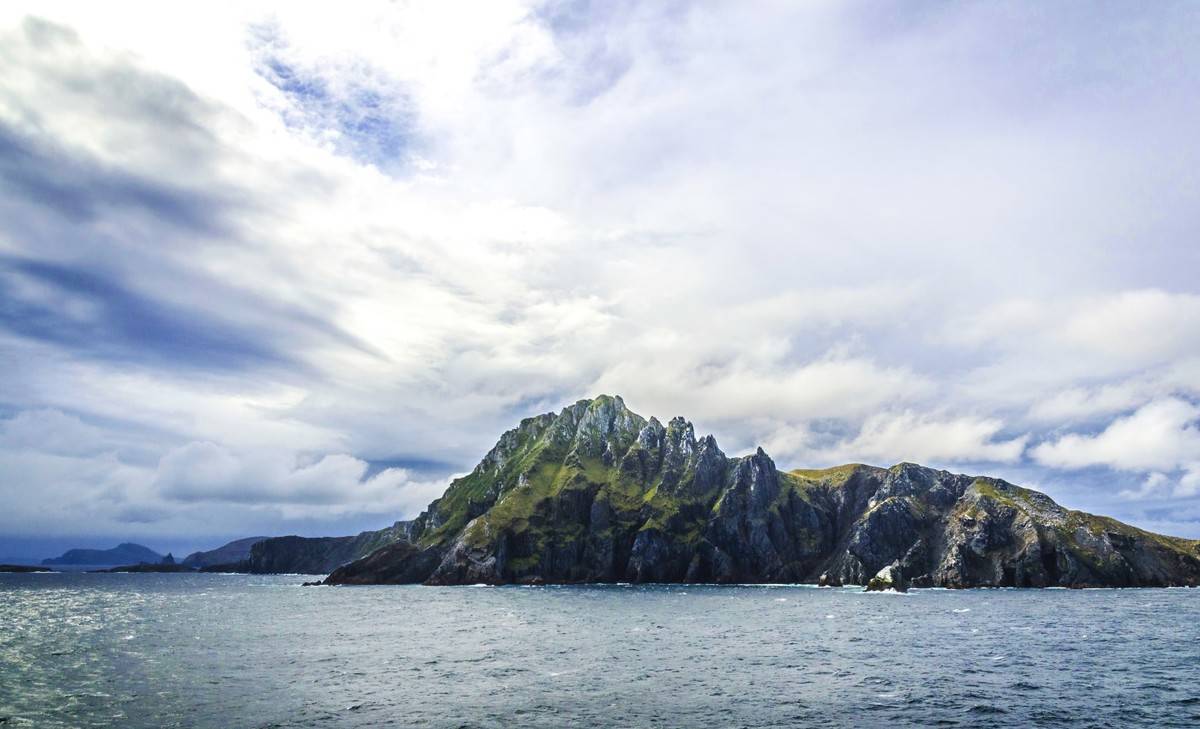 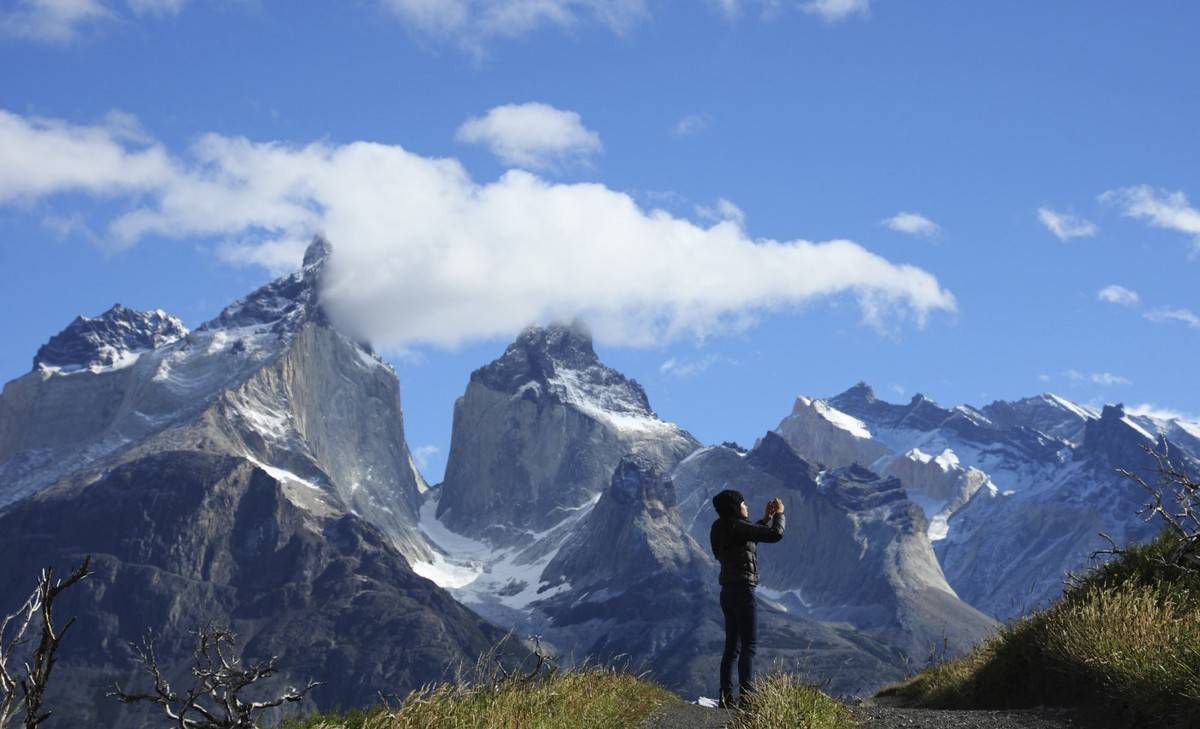 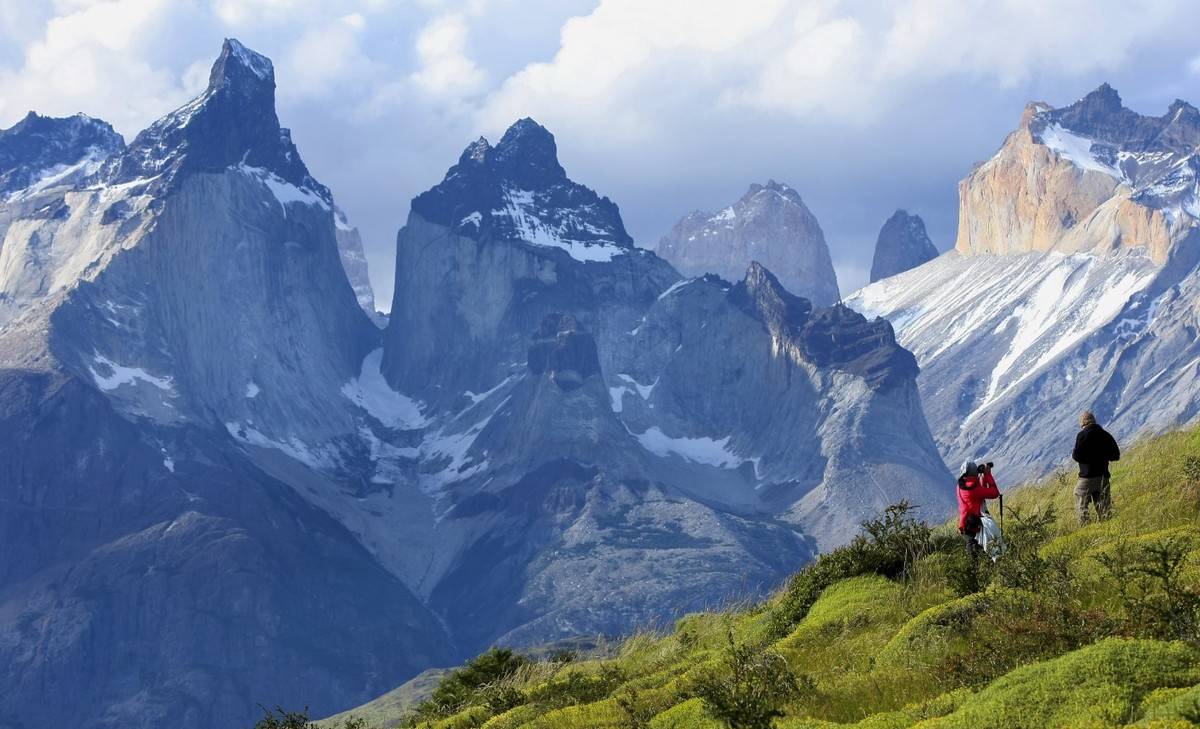 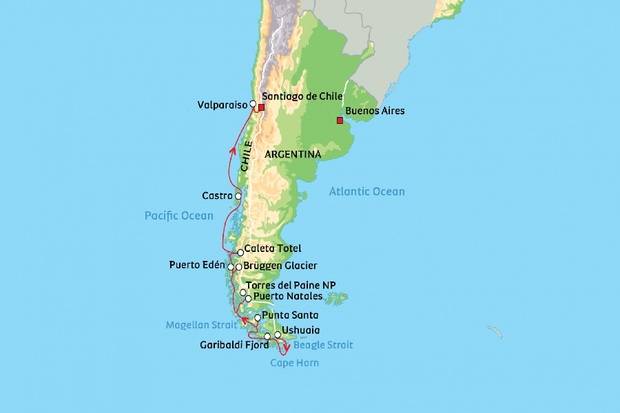 Arrive in Ushuaia, Argentina - the world’s southernmost town. Explore the quaint city or local countryside. Alternatively, consider a day trip off the beaten path to the raw, natural archipelago of Tierra del Fuego. It's a hiker's paradise with rugged snow-capped mountains, glaciers, flower-filled meadows and boggy quagmires. In the afternoon, we board our ship, the 5-star Ocean Victory.

We sail towards Puerto Williams on Chilean side of the Beagle Channel. The channel has rich wildlife with cormorants, penguins and sea lions on virtually every rocky outcrop, and dense temperate rainforest reaches from shore to tree line and the eternal snow. In this harsh climate, the hardy people of the now extinct Yagan tribe resided, as described by Charles Darwin in his journals.

Today we are going to see the famous "horn", Cabo de Hornos. It is difficult to predict the day’s program, as the waters south of the horn are unpredictable at best. Should weather be fair, we will use our landing Zodiacs to go ashore on Isla Hornos at the memorial for sailors who have lost their lives here.

Although the ship is very stable, we will hopefully get a brief impression of what the old sailing ships were going through in Magellan's and Darwin's time, and rejoice that ships are no longer what they have been. The first "modern" sailor to navigate the race was the Dutch captain Willem Schouten in 1616, who opened the dangerous route. But haven't the locals been here long before?

Today's highlight is sailing into the narrow and unbelievably beautiful Garibaldi fjord in Alberto de Agostini National Park – a UNESCO Biosphere Reserve due to its spectacular soaring glaciers and rich plant and wildlife. It is not uncommon to see a group of killer whales in these waters feasting on the seafood.

As we leave the island of Tierra del Fuego, we head into Magellan Strait and reach Fort Bulnes. The fort was built in 1843 on the rocky shores of Punta Santa Ana under the command of President Bulnes Prieto to maintain control of the Magellan Strait and the ships that sailed through it.

The fort is today restored to its original form, and the area around included in the fascinating Strait of Magellan Park.

Days 5-6: Through the Fjords to Puerto Natales

The day is set for cruising on the legendary Strait of Magellan, which divides “Land of Fire” from the South American continent as well as the Atlantic from the Pacific Ocean.

The climate is sub-antarctic and the coast is rugged and vegetation-poor. Yet these coasts have been home to a highly developed and populous Native American culture, consisting primarily of maritime, nomadic hunter-gatherers and others who contented themselves with staying on land from which they fished and collected seafood. The tribes lived isolated and unaffected by Western civilization until about 1800, after which they quickly became extinct as a result of new diseases and radical eradication campaigns initiated by the governments of Chile and Argentina. Today, our overall knowledge of these many different peoples is extremely sparse.

The Captain has through the night navigated the vessel more than 200 kilometers east across Chile through the world’s most complicated fjord system. Disembarking in the town of Puerto Natales we are ready for a bus drive into Torres del Paine National Park. Crowned by the three majestic granite towers, "Torres del Paine", and “Paine Grande”, 2,884 meters above sea, and encircled by huge lakes, calving glaciers and open grasslands where guanacos feed, it is fair to say that this is among the most beautiful national parks in the world.

"Paine" is a Native American word for "blue", and today's excursion into the national park shows why. We will drive through the park and enjoy the view of the mountains throughout the day. Occasionally we will get off the bus and take shorter walks to reach the best vantage points.

By now, we are in the deep archipelago and the ship navigates through the many narrow waterways, almost all of which are called canals. The route follows the canals Sarmiento, Esteban, Angostura, Inocentes and then into the long narrow Canal Messier. It is incredibly beautiful no matter what direction the eyes are turned. Pointed rugged, often snow-capped mountain peaks, glaciers, lots of life above and below the water. The canals have all been shaped and extended during the recent ice ages, when they were filled with glaciers from the Andes to the east. As we enter the 250km-long Messier, we begin to see small fishing villages. We will plan for Zodiac landings along the way where appropriate.

Our goal this morning is the 60 km long Brüggen Glacier, slowly flowing down from the huge Patagonian Ice Fields. We cruise in safe distance from the active glacier front – and continue north through the Messier for more adventures.

It is a must to visit the small, completely cut-off town of Puerto Edén, which, with less than 200 inhabitants, lies on the banks of the Canal Messier. The sea is the only access because neither roads nor paths lead to Edén. The city also has no roads between houses and shops, only wooden promenades or boardwalks. The population lives primarily on fishery and seafood collection, which is picked up once a week by a cutter.

We have reached the northern end of Canal Messier, where we find yet another exciting and typical Chilean village in this area. Caleta Tortel was built in 1955 to utilize the area's cypress trees for timber production. The village is located where rivers, meltwater and the sea coalesce into a mossy subsoil, which is why all houses are built on stilts and the roads are, like in Puerto Edén, built of wood. Cypress of course.

The Captain has through the night navigated the vessel more than 200 kilometers east across Chile through the world’s most complicated fjord system. Disembarking in the town of Puerto Natales we are ready for a bus drive into Torres del Paine National Park. Crowned by the three majestic granite towers, "Torres del Paine", and “Paine Grande”, 2,884 meters above sea, and encircled by huge lakes, calving glaciers and open grasslands where guanacos feed, it is fair to say that this is among the most beautiful national parks in the world.

"Paine" is a Native American word for "blue", and today's excursion into the national park shows why. We will drive through the park and enjoy the view of the mountains throughout the day. Occasionally we will get off the bus and take shorter walks to reach the best vantage points.

Days 12-13: Into the Pacific towards Valparaiso

Today’s landing is on the small island of Mocha, of which half is designated as a national park. Originally the island was inhabited by the so-called Lafkenches people. Francis Drake visited the island during his world circumnavigation, but had to leave after being seriously injured by the island's residents. In 1685, the governor forced the entire island population to what is today the city of Conception. There are several stories from the 19th century about a giant white casket whale that belonged to the island of Mocha, called Mocha Dich, which should have inspired Herman Melville to write Moby Dick.

In 2007, skulls from the original Mocha people were compared to skulls from the Easter Island and was found to have astonishing similarities, supporting the theory, originally put forward by Thor Heyerdahl, about the connection between South America and the remote islands of the Pacific Ocean.

We will utilize the ship's Zodiac fleets to make the landing and learn about the national park and the local flora and fauna.

After breakfast, it's time to leave your ship and get ready for the homebound journey.

Valparaíso, one of Chile's oldest cities. The city is constructed on a number of ridges around the bay and is known for its old cable cars, 15 of which are still functional. They lead from the harbor up to the old UNESCO-protected residential neighborhoods. Here colonial-era German and English traders lived in the colorful houses that illuminate the cityscape.