Draped across the north Pacific Ocean from Hokkaido, Japan, to Russia’s Kamchatka Peninsula, the 22 islands and 30 islets of the Kuril Islands form a necklace of active volcanoes and sea-sculpted coastlines waiting to be explored. Nutrient-rich waters washing this ‘Pacific Rim of Fire’ teem with marine life, from sea otters to harbour seals, Steller sea lions to orcas, Dall’s porpoise to beaked and sperm whales. The islands form a natural ‘flyway’ for migratory birds including both horned and tufted puffins, whiskered and rhinoceros auklets and exquisite little murrelets. You’ll Zodiac into flooded calderas, beneath soaring bird cliffs, to landings where brown bears fish for salmon. The fittest may even attempt to attempt to climb a volcano. Every day brings new adventure. 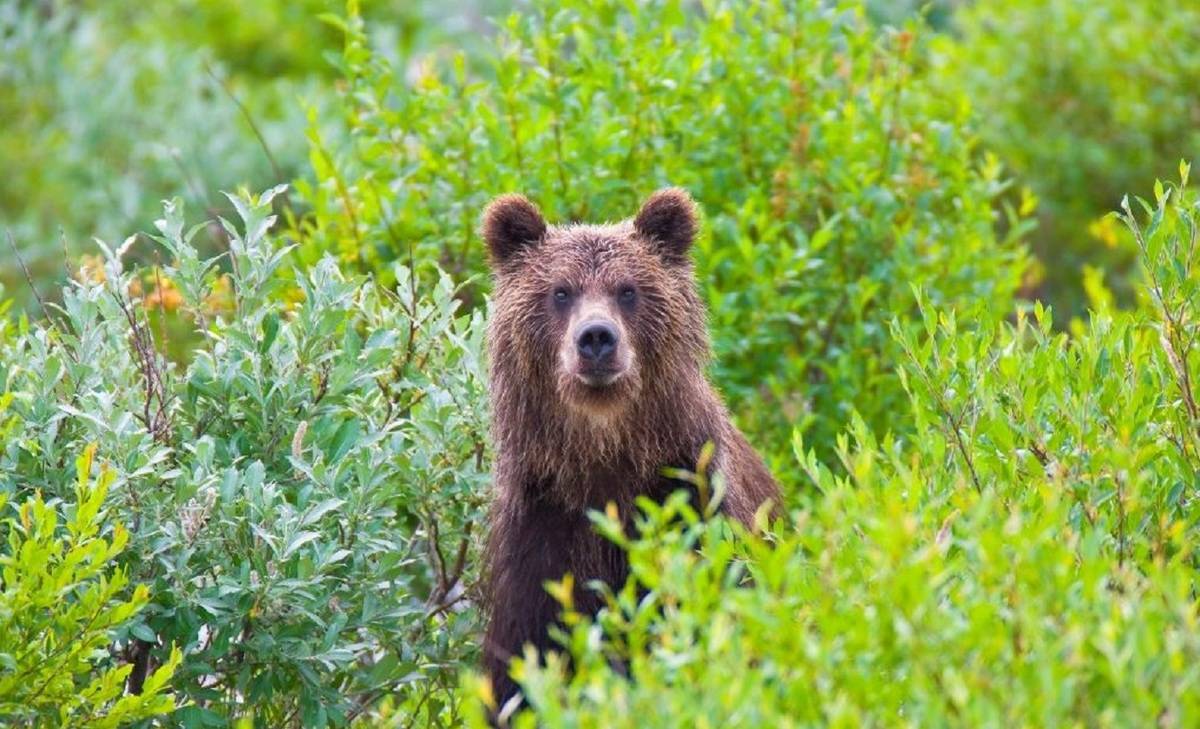 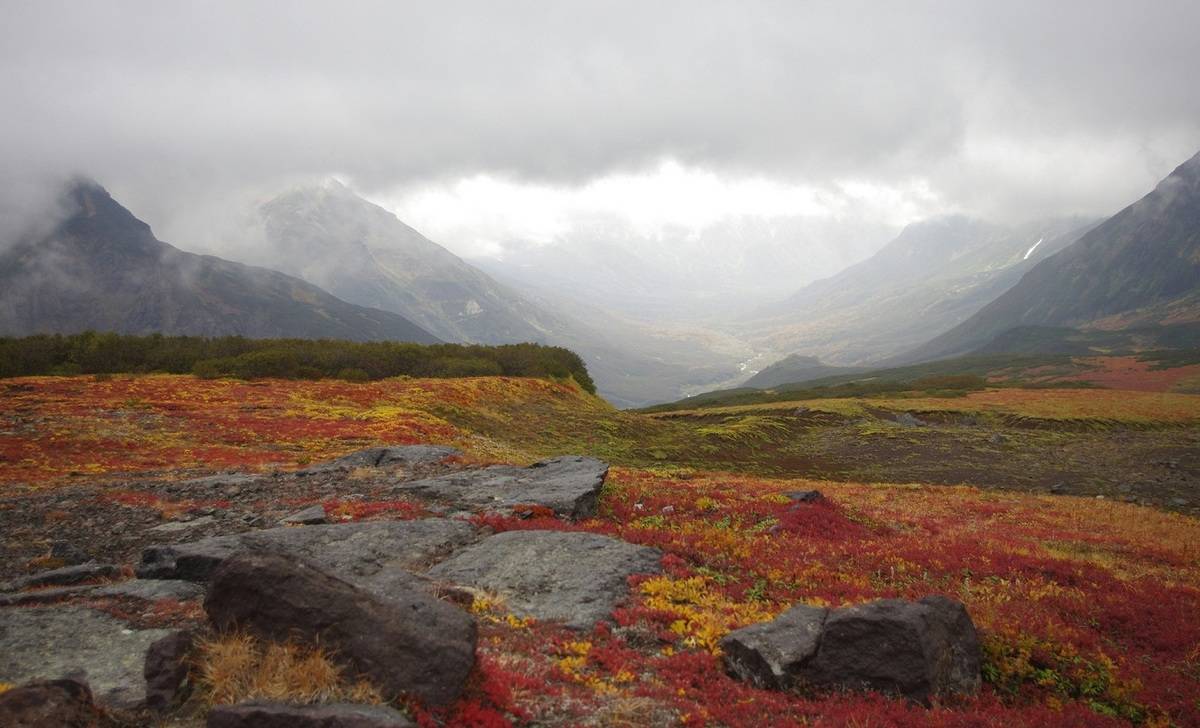 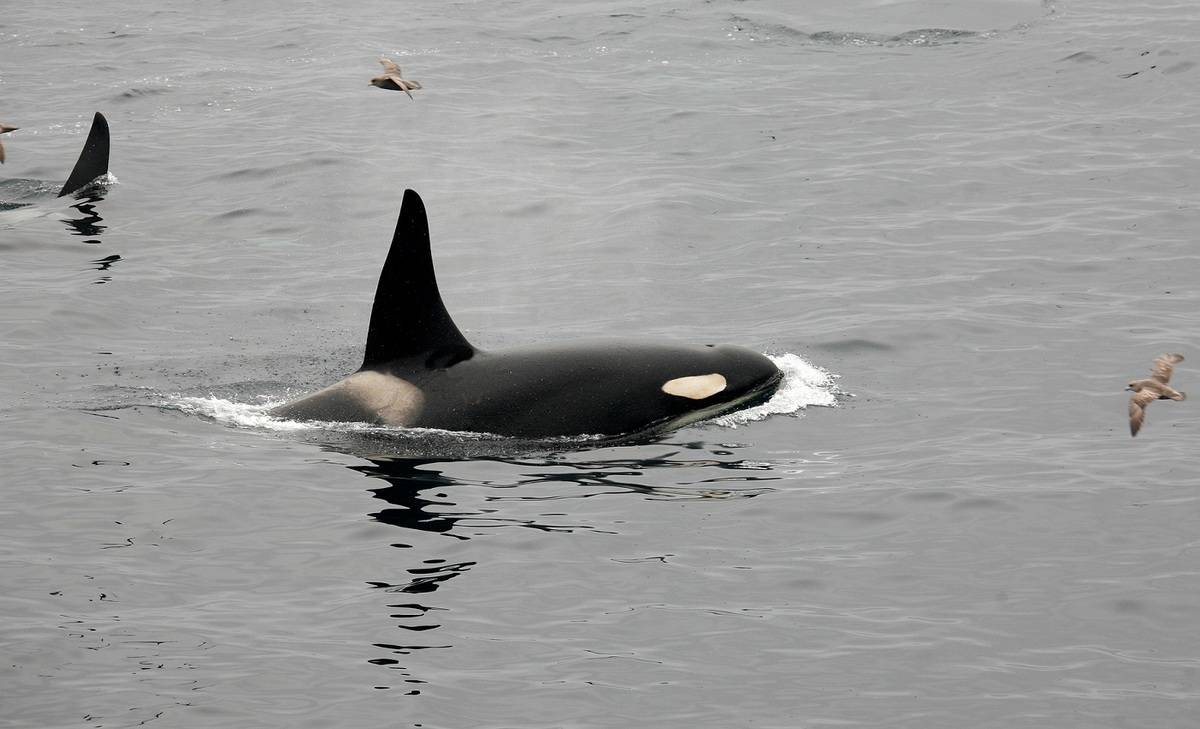 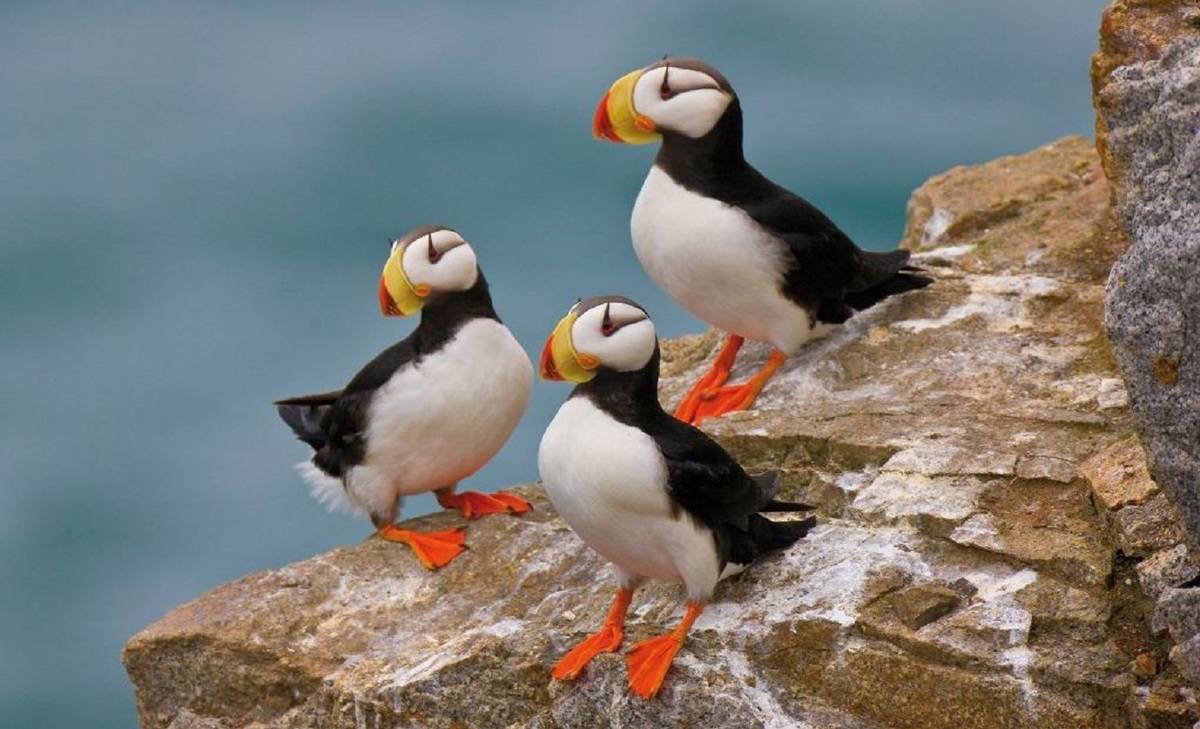 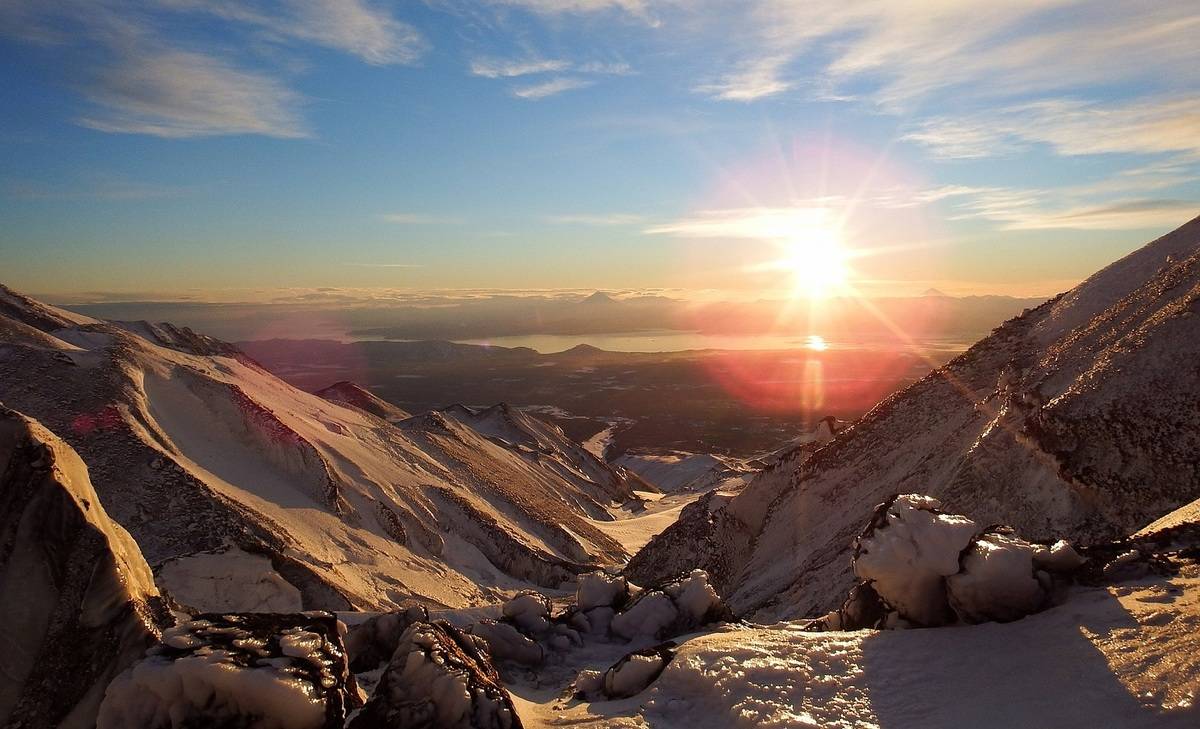 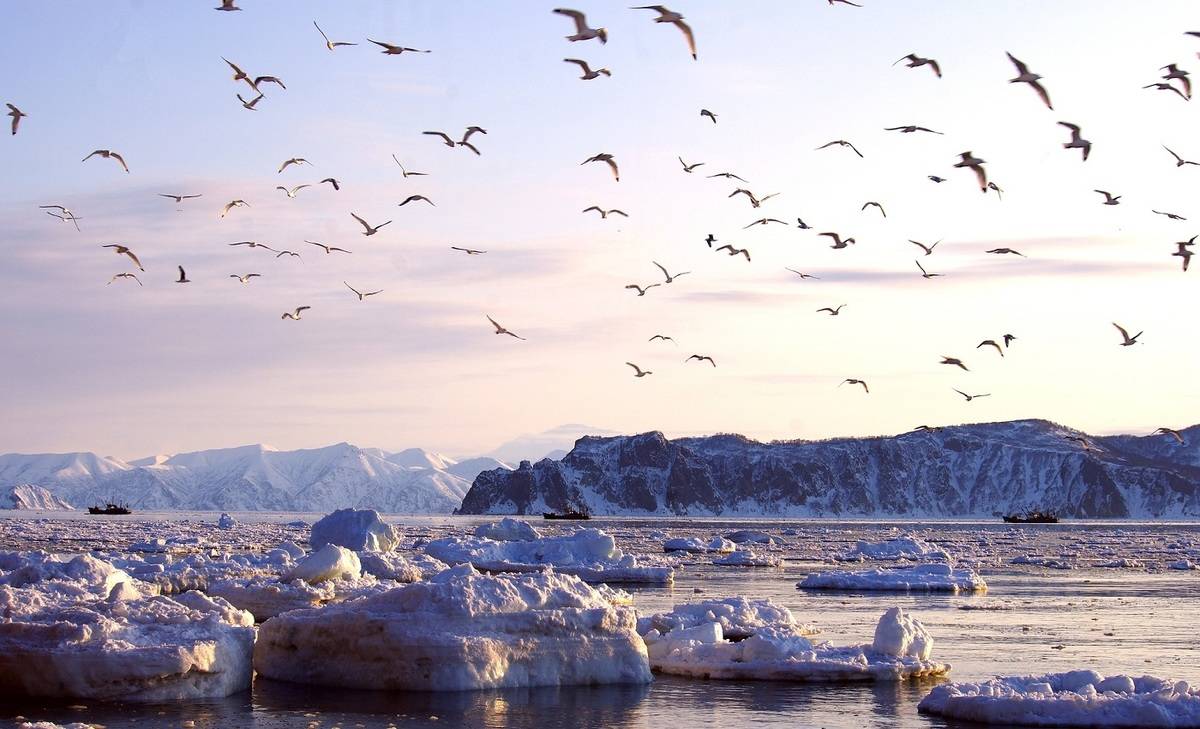 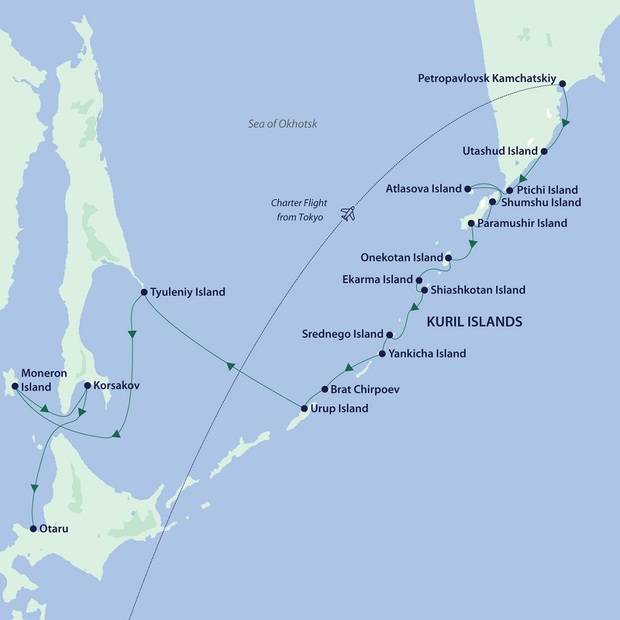 Upon check-in at Hotel Nikko Narita Airport, reception staff will provide you with your expeditions cabin tags. Please fill out the luggage tags clearly, showing your name and cabin number to allow us to deliver your luggage to your cabin ahead. At our voyage briefing, enjoy a welcome drink and meet fellow expeditioners, before spending the night in preparation for your charter flight to Petropavlovsk-Kamchatskiy.

Board our charter flight to Petropavlovsk-Kamchatskiy to embark the Sylvia Earle. After boarding, there is time to settle into your cabin before our important safety briefings. This evening meet your expedition team and crew at the Captain’s Welcome Dinner.

Lush valleys and snow-capped volcanoes welcome you to Kamchatka’s east coast, where brown bears feast on berries and salmon. In Vestnik Bay, we explore the coast of Utashud Island by Zodiac, home to shy otters, Steller sea lions, seabirds and Kamchatka brown bears. Rounding Cape Lopatka, Kamchatka’s most southern point, you land in Kambalnyi Bay, to stretch your legs beneath the magnificent, 2,161m volcano, Kambal'naya Sopka. Across Kuril Strait, cruise kelp beds off Shumshu Island in search of curious otters ferrying pups, and the bobbing heads of spotted seals. Explore the bird cliffs of Ptichi Islands alive with puffins.

Ashore, on Shumshu, a peaceful river snakes through grassy wetlands where lady-slipper orchids and wild roses bloom. On Atlasova, you land beneath a wind-sculpted hill of volcanic ash to explore remains of a Soviet gulag in the shadow of a near-perfect 2,339m volcano, Alaid, the highest in the Kurils. You’ll watch for nesting cormorants, buzzards, Eurasian wigeons, and tufted ducks, while peregrine falcons sometimes soar above the beach.

Hike across Onekotan’s tundra, as it wakes to summer, and through bonsai pine forests to Black Lake, watching for red foxes and remains of Ainu dwellings. From Onekotan Island, we explore the coastline of nearby volcanic Kharimkotan or Makanrushi Islands by Zodiac.

Explore Ekarma, sanctuary to many birds, including puffins, auklets, fulmars and cormorants. Sea otters swim just off the northeastern cape. Vast nesting colonies of storm petrels and remains of Ainu villages await you on Shiashkotan.

Intriguing and beautiful, this uninhabited island hides a flooded volcanic caldera of emerald green waters. Accessible by Zodiac only at high tide, the lagoon, offers you fumarole fields, hot springs and bubbles rising from the sea floor. Walk to the crater rim in search of blue foxes, while at dusk, watch as spectacular concentrations of crested and whiskered auklets stream back from the sea.

Evocative mists often engulf Chirpoy islands, lifting to reveal dramatic basalt columns of Brat Chirpoyev as you approach by Zodiac, surrounded by thousands of northern fulmars, kittiwakes, the odd puffin and sea otters. Otherworldly roars herald the Steller’s sea lion colony on Chirpoy, with the promise of a hike up the flanks of an active volcano when you land.

Urup offers 120 kilometres of stunning volcanoes, lush vegetation, lakes and rivers. Cruise the ‘Twins’, a geological wonderland of twisted basalt sea cliffs, hike to Japanese bunkers with spectacular views and tufted puffin nests. On the west coast, you may Zodiac through basalt tunnels of Petroskov Rocks.

Meaning seal in Russian, Tyuleniy attracts as many as 250,000 individuals that gather here each summer during their breeding season. You’ll be greeted by a cacophony of barks as you approach the island by Zodiac. Search the sea cliffs for nesting black-legged kittiwakes; crested, whiskered and rhinoceros auklets; tufted puffins, common and thick-billed murres, and ancient murrelets.

At Korsakov, at the southern tip of Sakhalin Island, we clear Russian customs for entry into Japan. For much of its history, control of Korasakov oscillated between Japan and Russia, until the town was ceded to the Soviet Union at end of World War Two. You might explore the port town while the Sylvia Earle finalises its exit clearance before departing for Otaru, Japan.

Note: Today you will cross the international date line, therefore loose a day

Disembark in the harbour city of Otaru, Hokkaido. Transfer to Sapporo to continue your journey.