Experience a rare chance to explore wondrous islands. From Murmansk, cross the Barents Sea to a world few have seen. Enter the Russian Arctic National Park and watch for polar bears, whales, walrus, and seals. Enjoy long tundra walks and geological oddities. Get up close to spectacular bird cliffs and visit fascinating historic huts of explorers like Fridtjof Nansen. 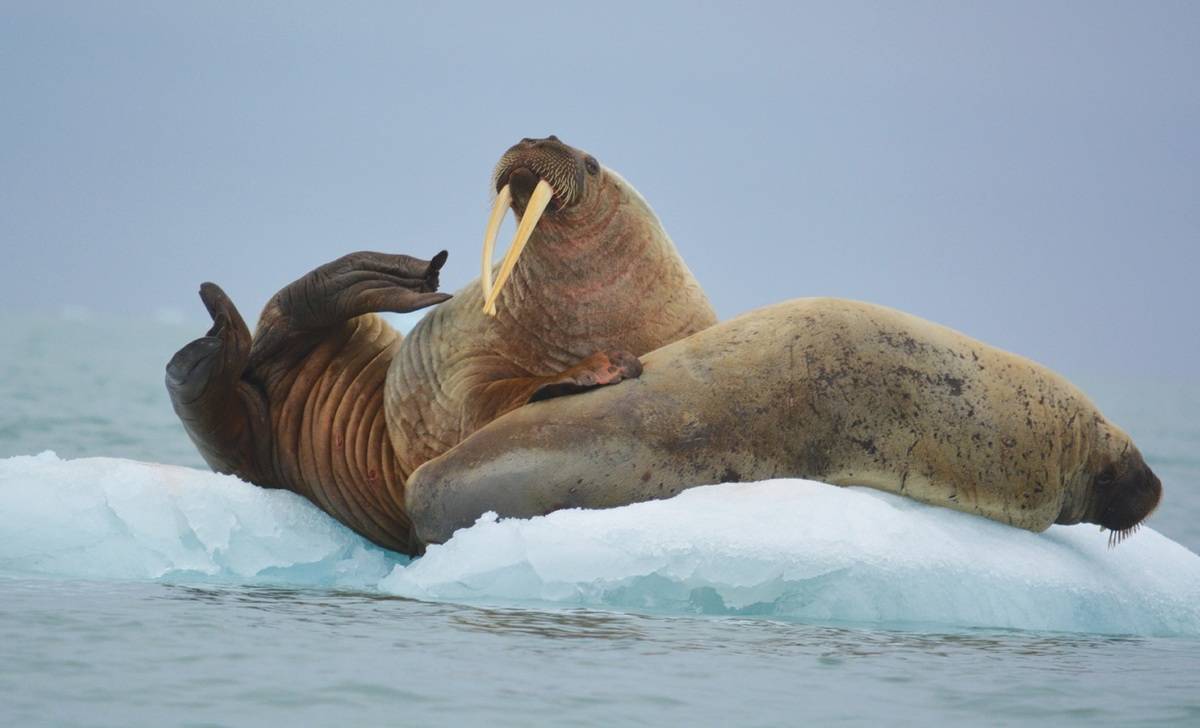 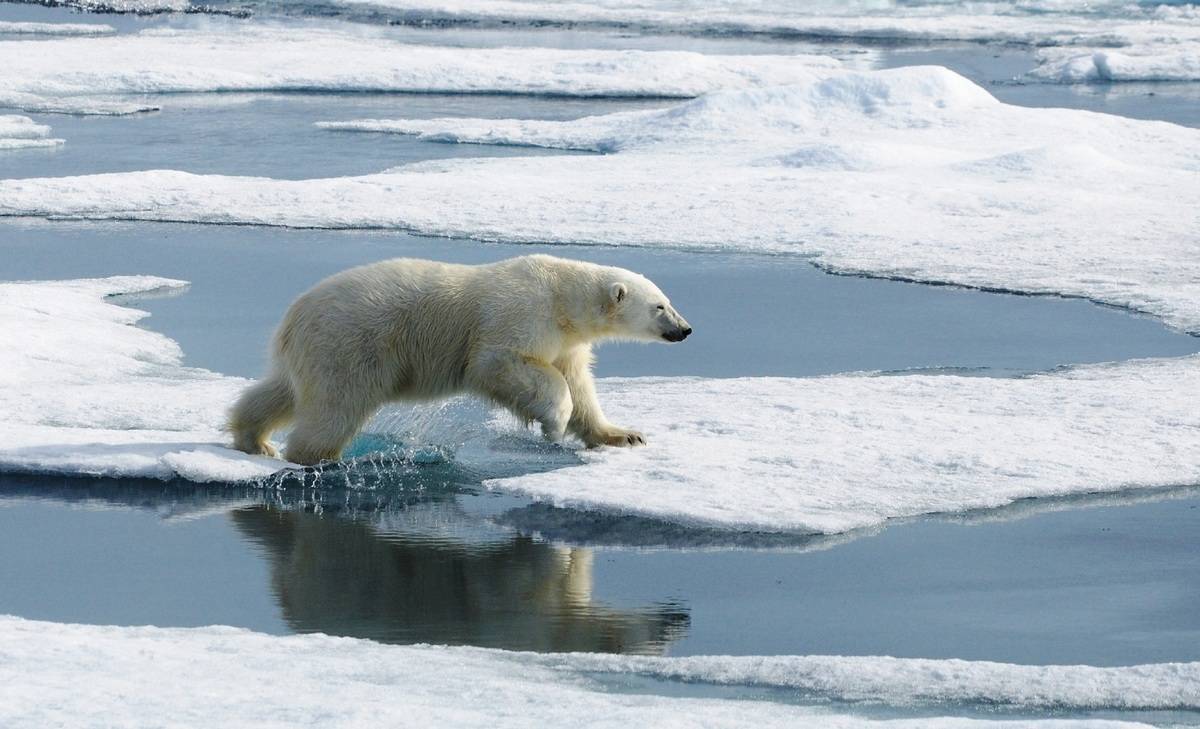 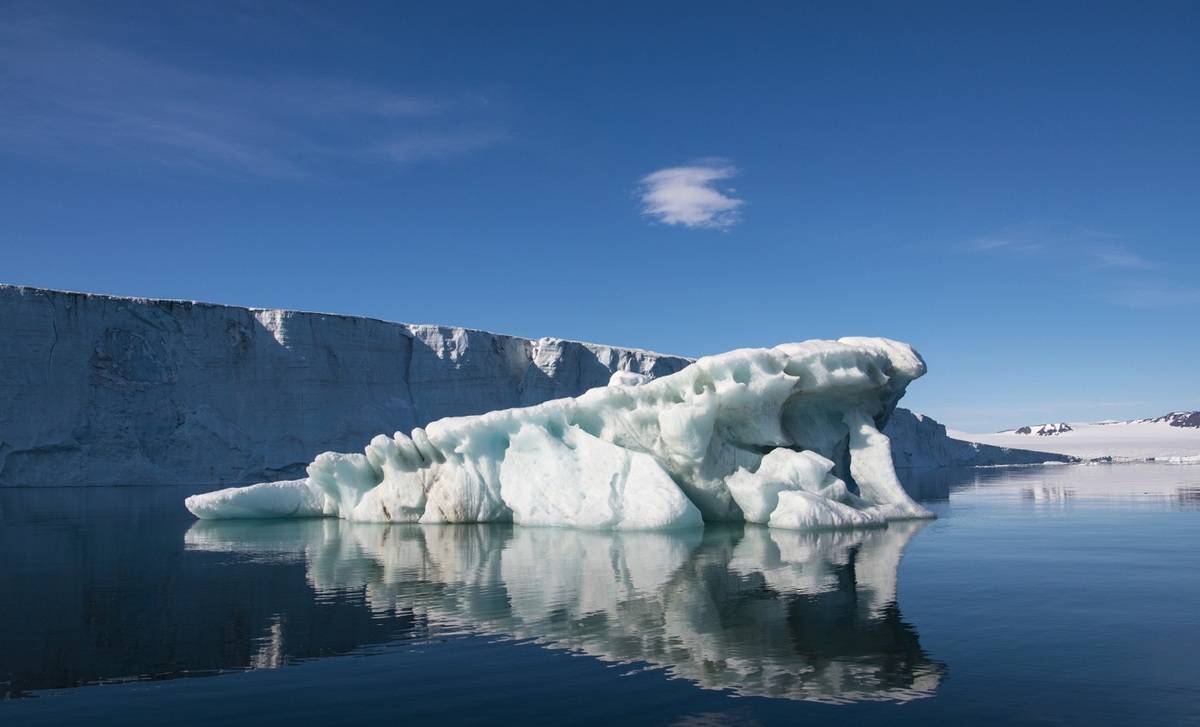 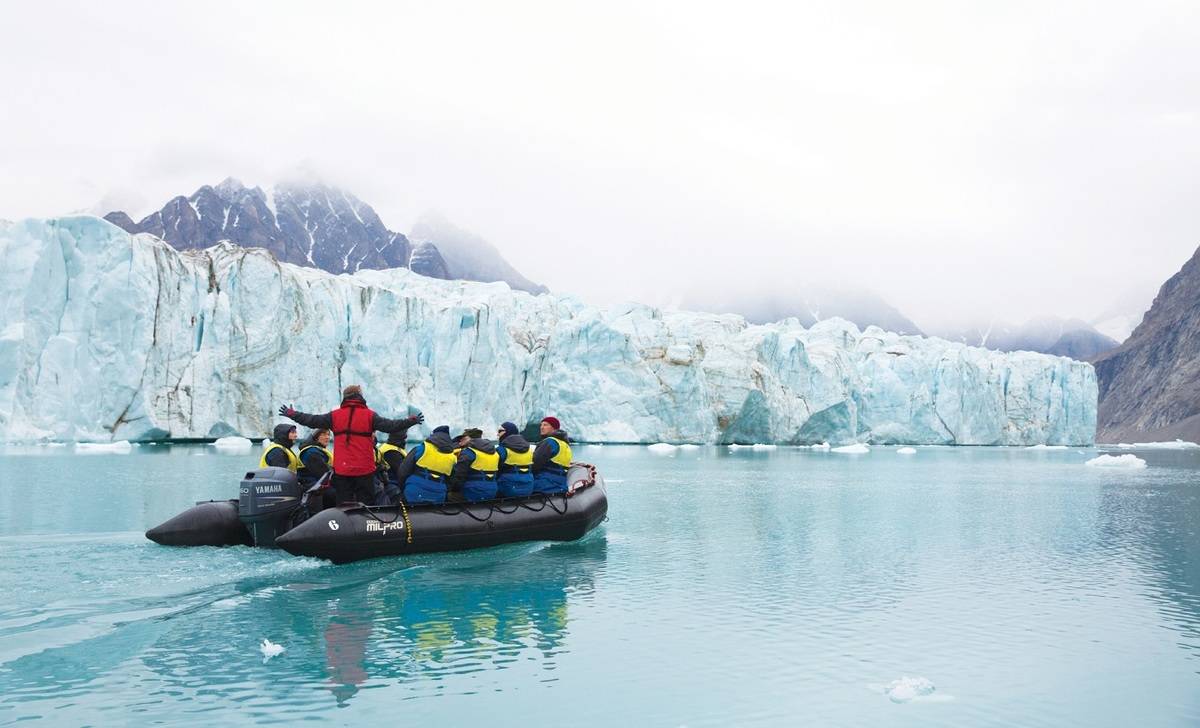 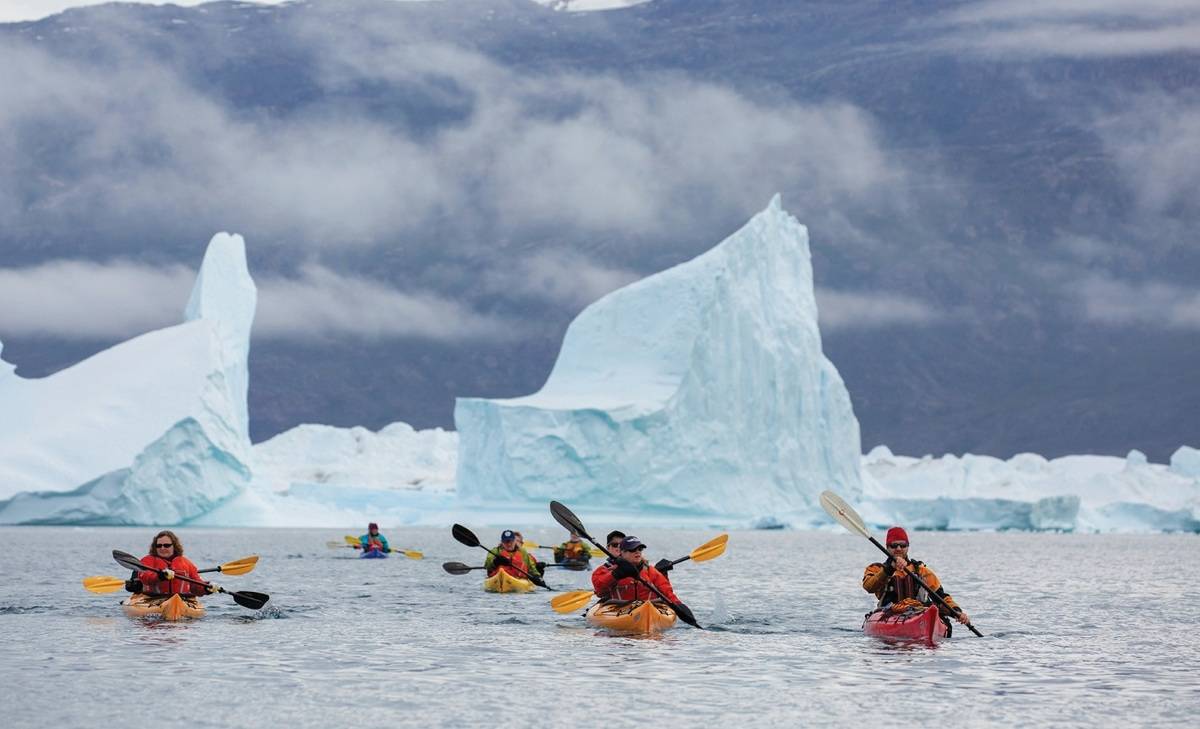 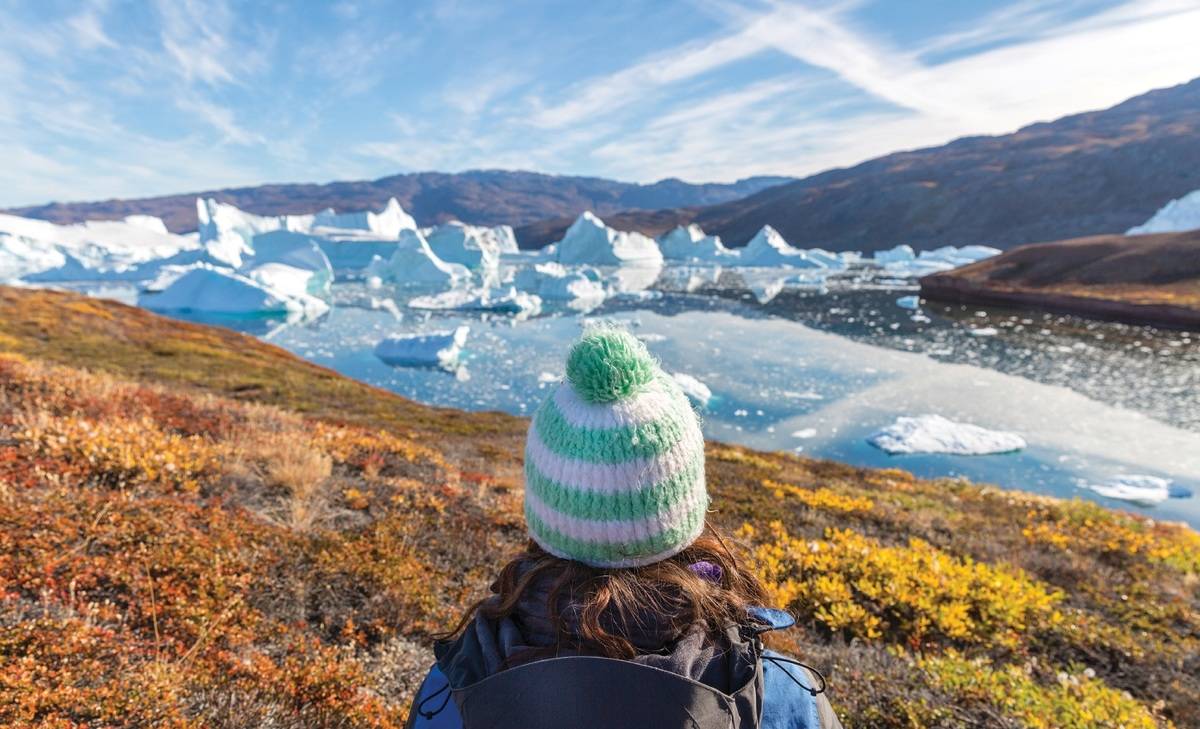 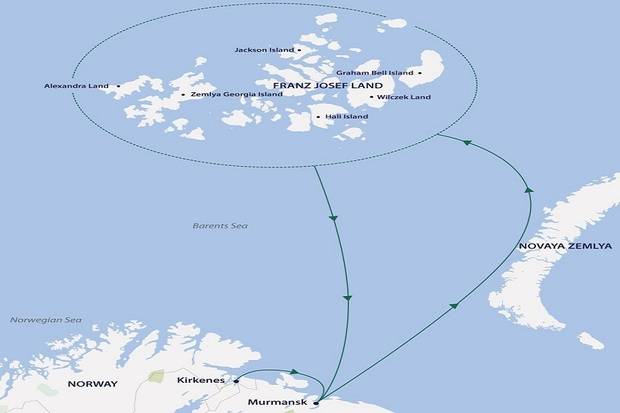 In Murmansk, Russia, join a pre-arranged half day excursion visiting the monument to the soldier of WW2 and also the first nuclear icebreaker Lenin-details of joining instructions for the city tour will be included in your final documentation. In the late afternoon board the Greg Mortimerlate afternoon, where you’ll have time to settle into your cabin before our important briefings.

Over the next two days at sea, enjoy informative and entertaining lectures from our expert expedition team including naturalists, historians and geologists.

Novaya Zemlya archipelago was once an important nuclear research site during the cold war, and today only a few places in the north are accessible to visitors. These islands offer stunning rugged Arctic landscapes -enormous extinct volcanoes, jagged cliffs and the most isolated mountain range in the Baltic Sea. For wildlife lovers, Novaya Zemlya boasts a great variety of flora and fauna, many of which are on the brink of extinction. We hope to visit Inostrantseva Bay, which has one of the most picturesque glaciers in the entire Novaya Zemlya archipelago. The bay offers breathtaking panoramic views of Arctic wilderness. The fog can be quite thick here and the swell can be high, but we will attempt to launch our Zodiacs to explore the bay and photograph the stunning icy landscape. If we’re able to land, we will enjoy hiking along the coastline and observe some of the endemic species of Arctic flora and fauna. Just north of the northern tip of Novaya Zemlya Archipelago is Oransky, a group of several small inshore islands, located within the Russian Arctic National Park established in 2009.

The islands themselves are not inhabited by humans, but remnants of early hunting activity are visible. At the nearby Zhelania Cape, situated at the northeastern-most tip of Northern Island a manned weather station was operated as well as a military base, but both were closed in the 1990s. On Oransky Islands Brünnich’s guillemots, black-legged kittiwakes, glaucous gulls, black guillemots, Atlantic puffins and great skuas can be found breeding. You may get a chance to see a massive walrus rookery, various species of whale, and the Novaya Zemlya reindeer. If we’re very lucky we may also see polar bear, and the ones found at Novaya Zemlya are considered to be a genetically unique sub-species.

Our on board lecture program continues as we continue our sea crossing to Franz Josef Land. You may choose to spend your time staying active at the gym, treat yourself to a massage in the wellness centre or getting to know your fellow expeditioners.

Franz Josef Land is a stark yet beautiful world of glaciers, mosses and lichens. Approximately five million sea birds nest on the archipelago every year, with the thick-billed guillemot accounting for approximately 20%. Other seabirds such as fulmar, kittiwake, Brünnich's guillemot, black guillemot and little auk are common throughout the archipelago. On the flat tundra, nest other species such as: common eider, purple sandpiper, Arctic skua, glaucous gull, ivory gull, Arctic tern and snow bunting. Franz Josef Land is home to two Arctic giants –the Polar bear and the walrus. There is also a population of Arctic fox, which typically have their territories near seabird habitats. The waters of Franz Josef Land are visited by whales, including humpback, bowhead, narwhal, and white beluga whale. Walrus, ringed seals, bearded seals and an amazing species of mammals, choose Franz Josef Land and the water areas around it as their home.While there are many exciting places we can choose to visit over the following week, weather, wind, and sea-ice conditions will determine our itinerary in Franz Josef Land. A sample of some of the places where we may land, hike, photograph or view spectacular wildlife and scenery include:

Bell and Mabel Island:
The remains of an empty cabin built in 1880 by British explorer Benjamin Leigh Smith can be found on Bell Island. On Mabel island offers an opportunity to get close to a little auk colony as the birds nest between the rocks on the slope above the beach where the Zodiacs land.

Cape Flora -Northbrook Island:
Located in an unglaciated area in the Southwest of Northbrook Island, Cape Flora is one of the most famous historical site in Franz Josef Land because it is one of the most accessible locations in the archipelago and often served as a base for polar expeditions in the late 19th and early 20th centuries. Cape Flora features some of the most beautiful tundra in Franz Josef Land, but landings on the rocky beach, which is prone to swell from the Barents Sea can often be tricky. Cape Flora is where Benjamin Leigh Smith’s vessel Eirawas shipwrecked in 1881, after being trapped in pack ice.

Geographers bay (Prince George Land):
Prince George is the largest and longest island of the Franz Josef Archipelago. Most of the island is covered in large glaciers and ice domes, such as the Brusilov Ice Dome -the highest point of the island. A landing at Geographers Bay allows for a hike up one of the ice domes to stretch our legs and to enjoy the wonderful views over the archipelago, as Prince George Island is not fully glaciated. It’s also a great spot for enjoying the typical flowers of the north Arctic tundra.

Tikhaya Bukta (Hooker Island):
Tikhaya Bay was a major base for polar expeditions, and where a team of meteorologists from the Russian Sedov station were marooned at the beginning of the Second World War. It was also the location of a meteorological station between 1929 and 1963. The remains of the old Russian station is worth a visit and after thousands of rusting barrels were found and cleared here five 5 years ago, the station now resembles a ghost town or a living museum. You will also find here the world’s northernmost (Russian) post office!

Rubini Rock (Hooker Island)
The impressive basalt cliffs create the best bird cliffs in the archipelago housing more than 100,000 birds comprising of mostly Brünnich guillemot, but also kittiwake and little auks. The bird cliff lies just off Calm Bay and is perfect for Zodiac cruises. The island is a volcanic plug, the central remains of conical volcano.

Cape Tegethoff (Hall Island):
The place of the first landing in 1873 by Austro-Hungarian expeditioners Julius Von Payer and Karl Weyprecht after the Tegethoffsunk in 1873. Beautiful basalt rocks and bird cliff rookery of guillemot, gulls, kittiwake and little auks.

Cape Triest, Champ Island:
Champ Island is famous for the incredible stone spheres (geodes), commonly called “Devils Marbles” with sizes ranging from tennis balls to boulders that are three metres in diameter! These rocks are a unique geological feature that can be found only in the Arctic regions. Keep a look out for walrus in the water or hauled out on the beach during our wet landing.

Cape Norway (Jackson Island):
The place where the famous Norwegian explorers Fritjoj Nansen and Hjalmar Johansen spent the winter of 1895-96 after returning from their attempt to reach the North Pole. We can see the remains of the stone hut built by the men including a big log that was used as a makeshift roof. A commemorative plaque provides marks this event where the men survived the winter until the following summer, when they resumed their journey southwards.

Cape Fligely (Prince Rudolf Island):
At 81° 51’N, this is the northernmost point of Eurasia, where we can cruise along the ice edge and perhaps get a glimpse to the North Pole in clear weather conditions.

Teplitz Bay (Prince Rudolf Island):
An old abandoned Russian meteorological station is located here –it was once the northernmost weather station in the world. The bay is often chock full of ice but provides a marvellous opportunity to enjoy the northernmost zodiac cruise!

Walrus Haulout at Stolichky (Stoliczka) or Apollonov Island:
Walrus can be found everywhere on the sea ice in the Franz Josef archipelago. We hope to visit one of the established haul out sites to observe them on land. Polar bears can be seen almost everywhere on, or between the islands. We may see some on land but we hope to find them on the pack Ice, their natural habitat. Seeing polar bears is a highlight of a voyage to Franz Josef Land and can happen at any moment. We will change the itinerary in case we encounter one or more polar bears, maximising every opportunity spending time observing the king of the Arctic!

The return crossing of the Barents Sea offers some good opportunities to encounter whales, perhaps the elusive bowhead whale if we’re lucky, and certainly plenty of opportunities to photograph sea birds.

Back in Murmansk for clearance procedures before continuing to Kirkenes.

Arrive in Kirkenes in the morning, farewell your expedition team and fellow passengers as we all continue our onward journeys, hopefully with a newfound sense of the immense power of nature. A transfer to downtown Kirkenes or the airport is included in the cost of the voyage. 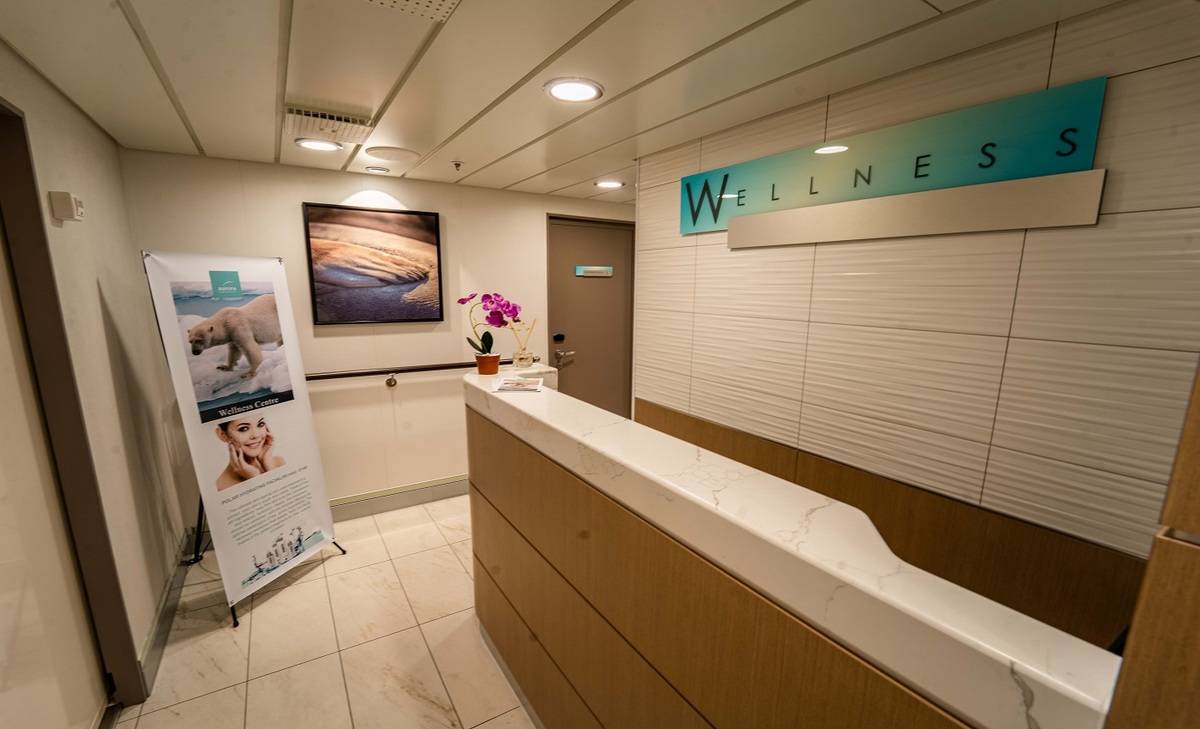 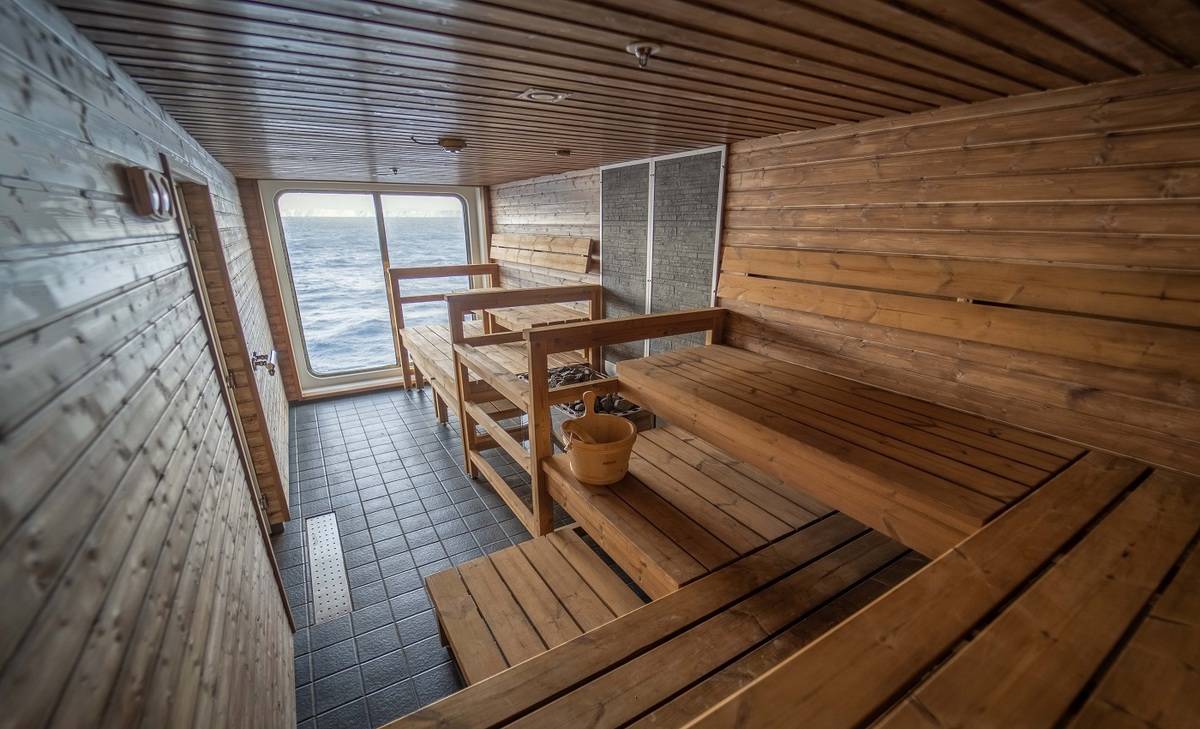 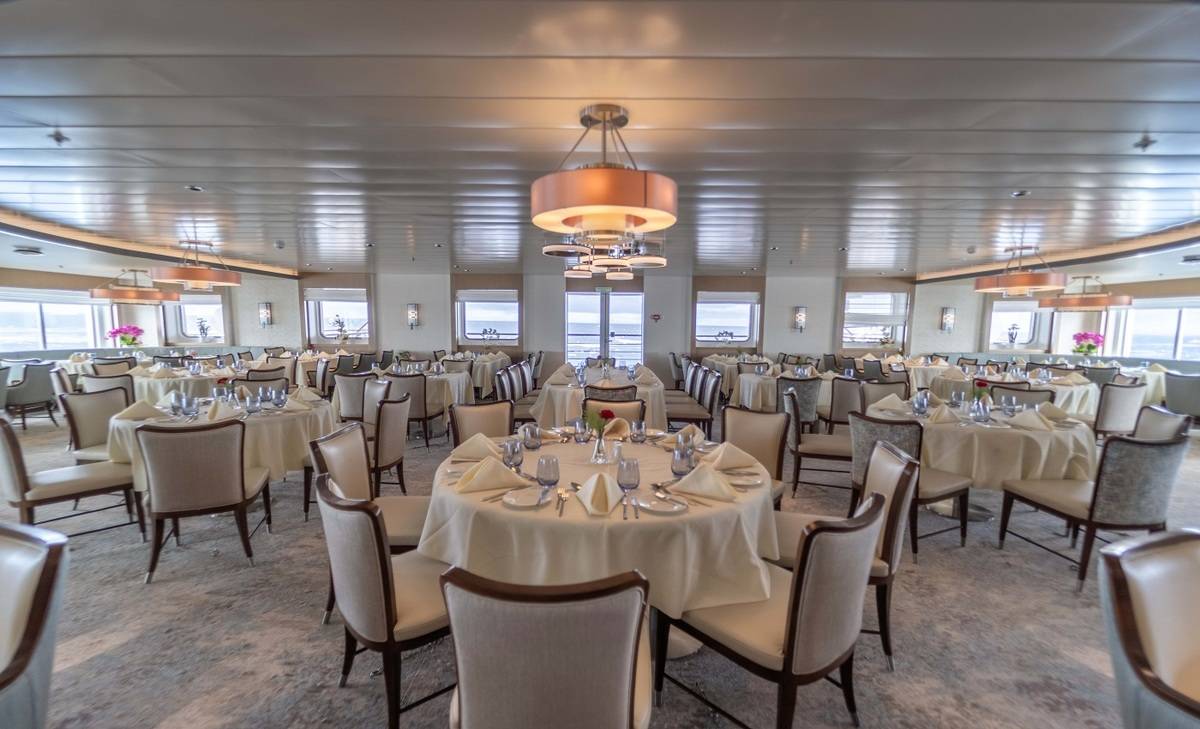 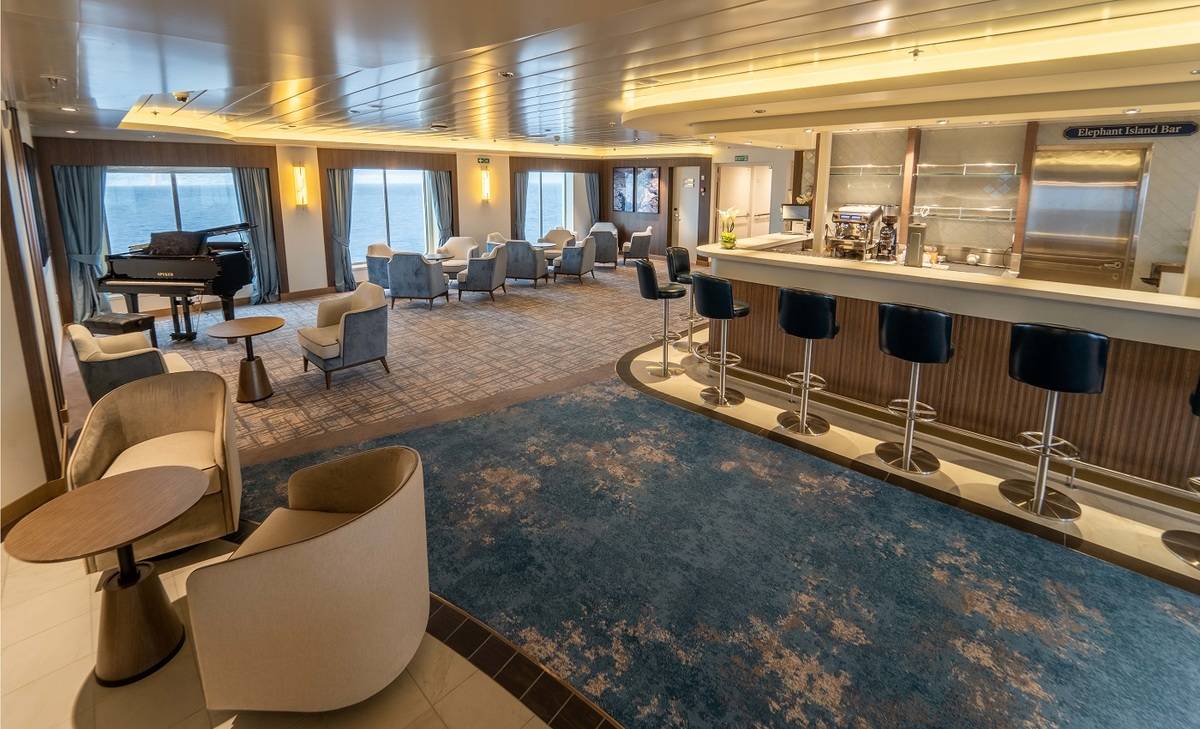 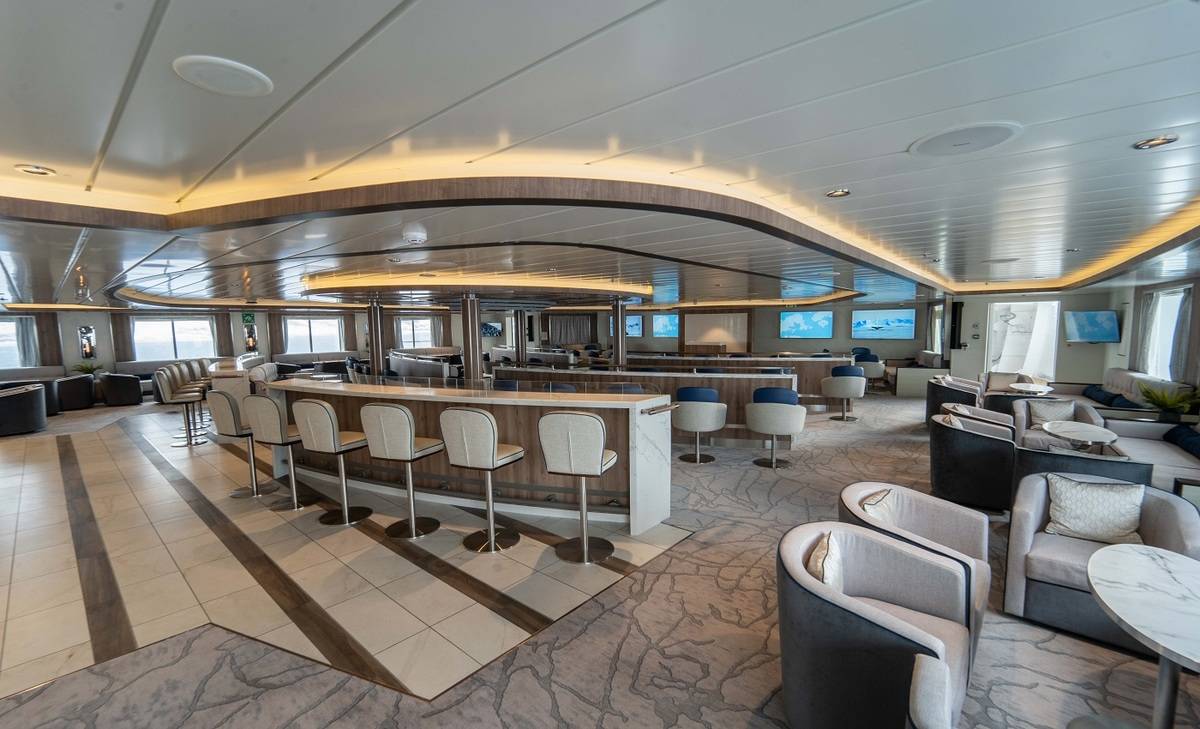 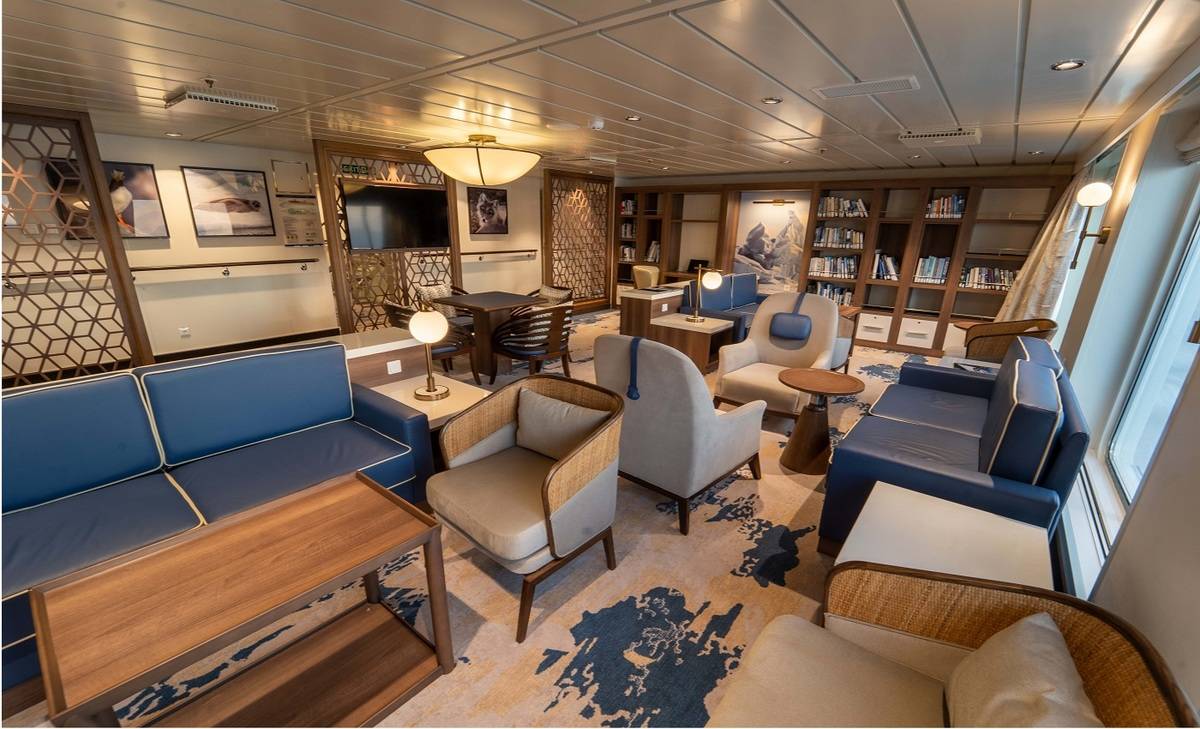 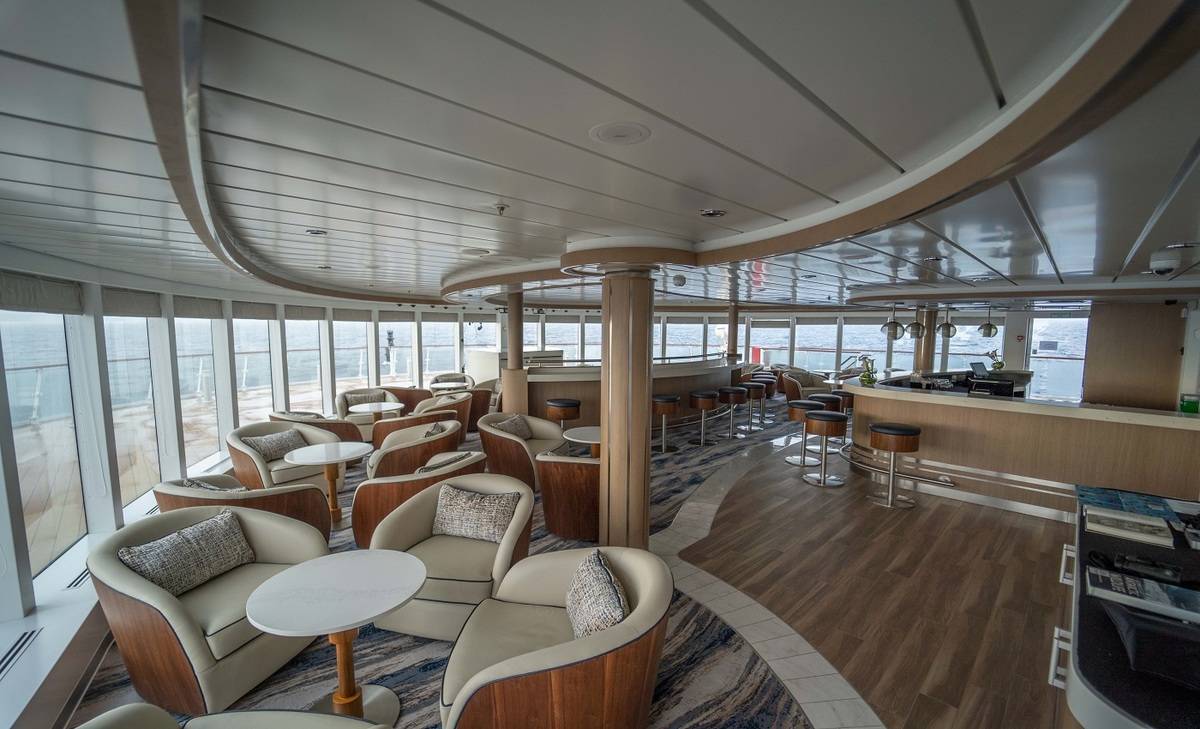 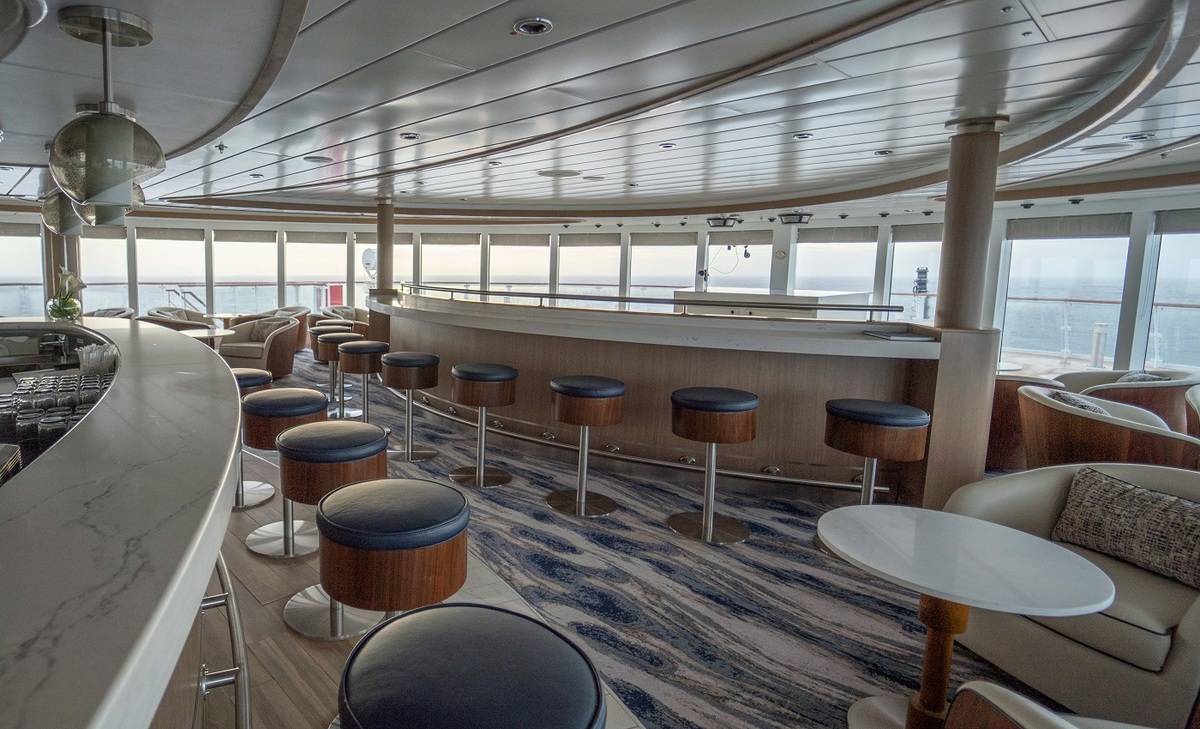 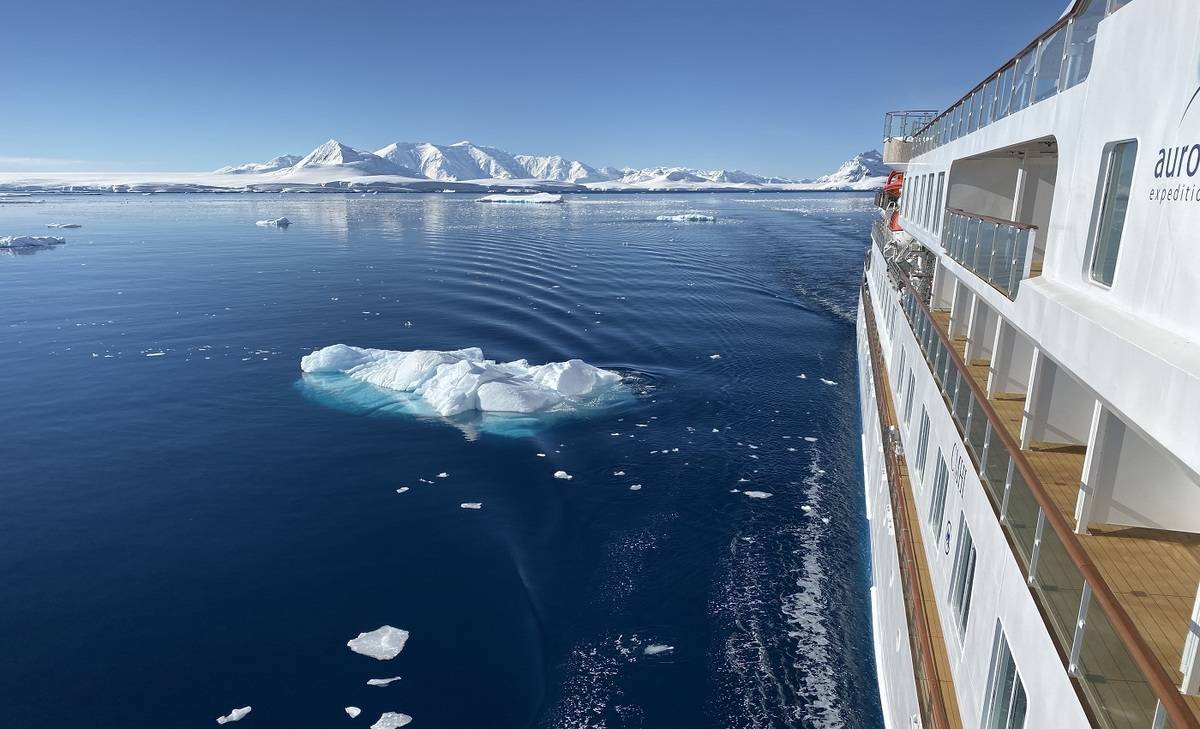 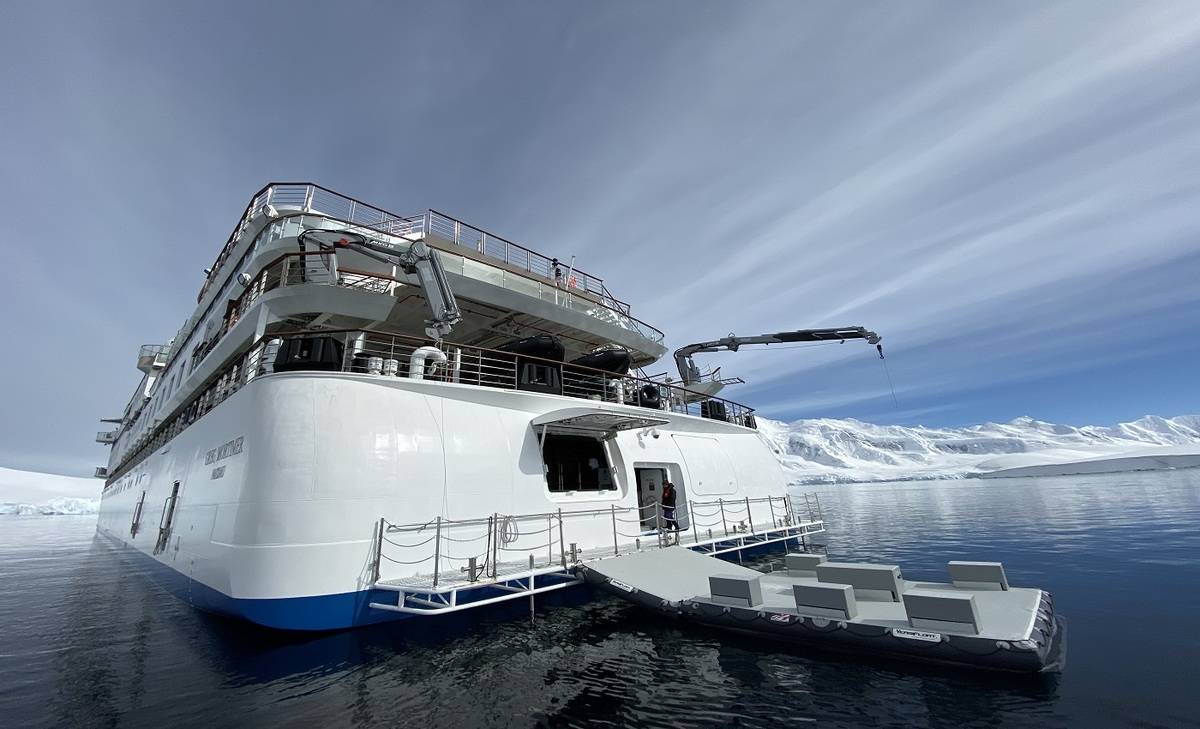 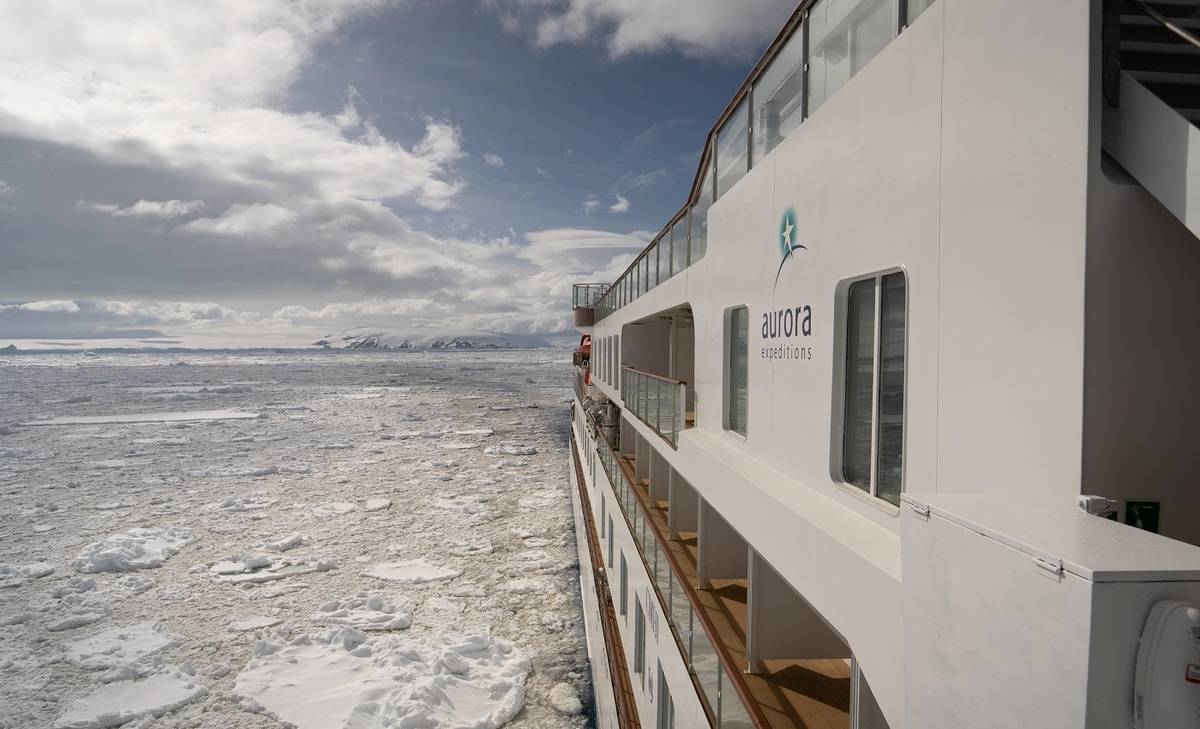 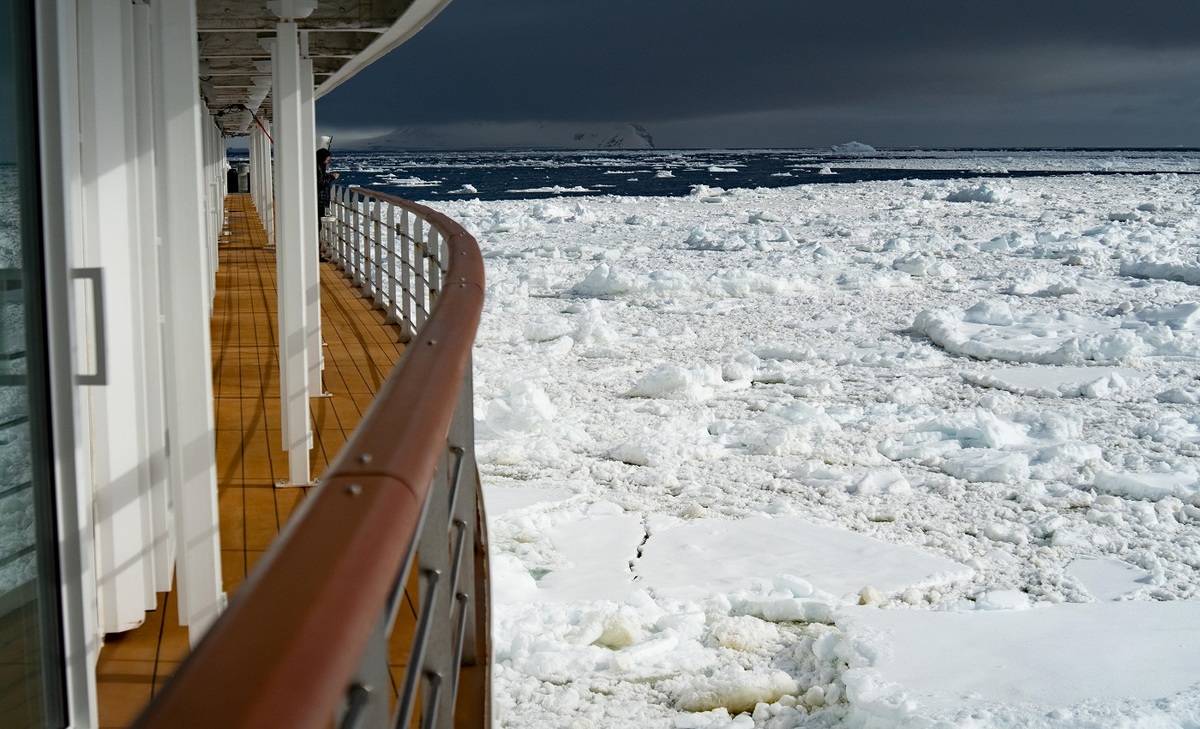 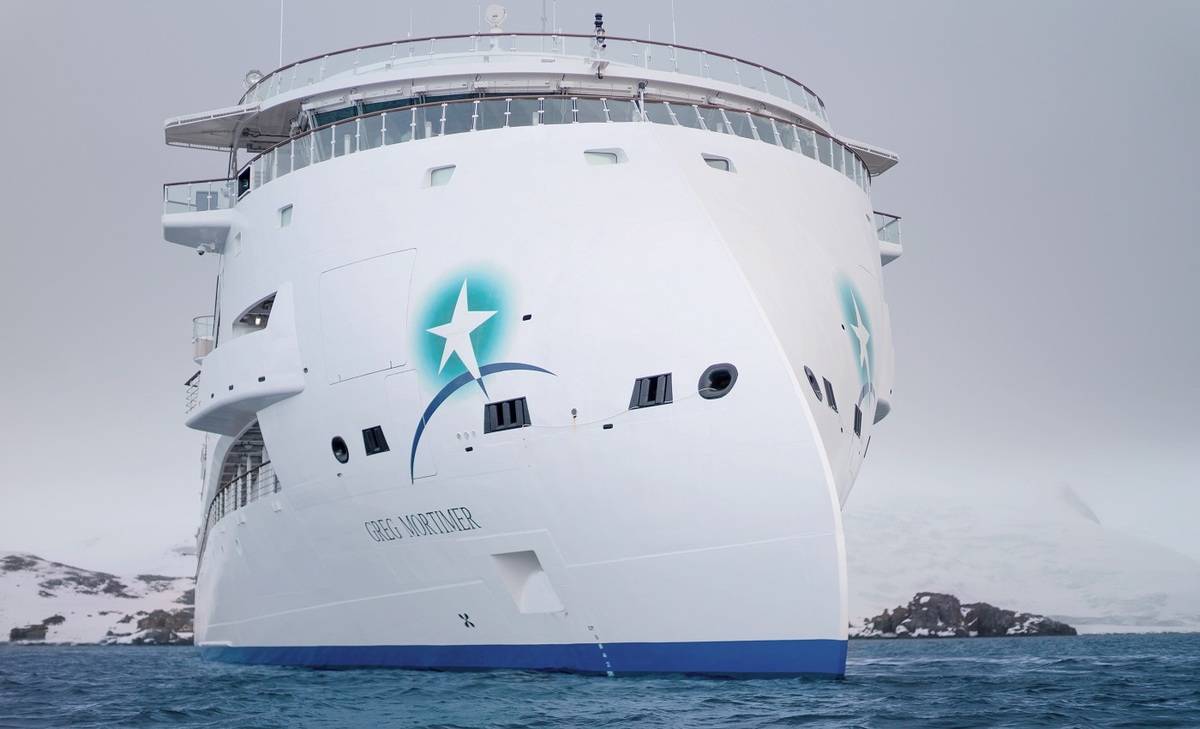 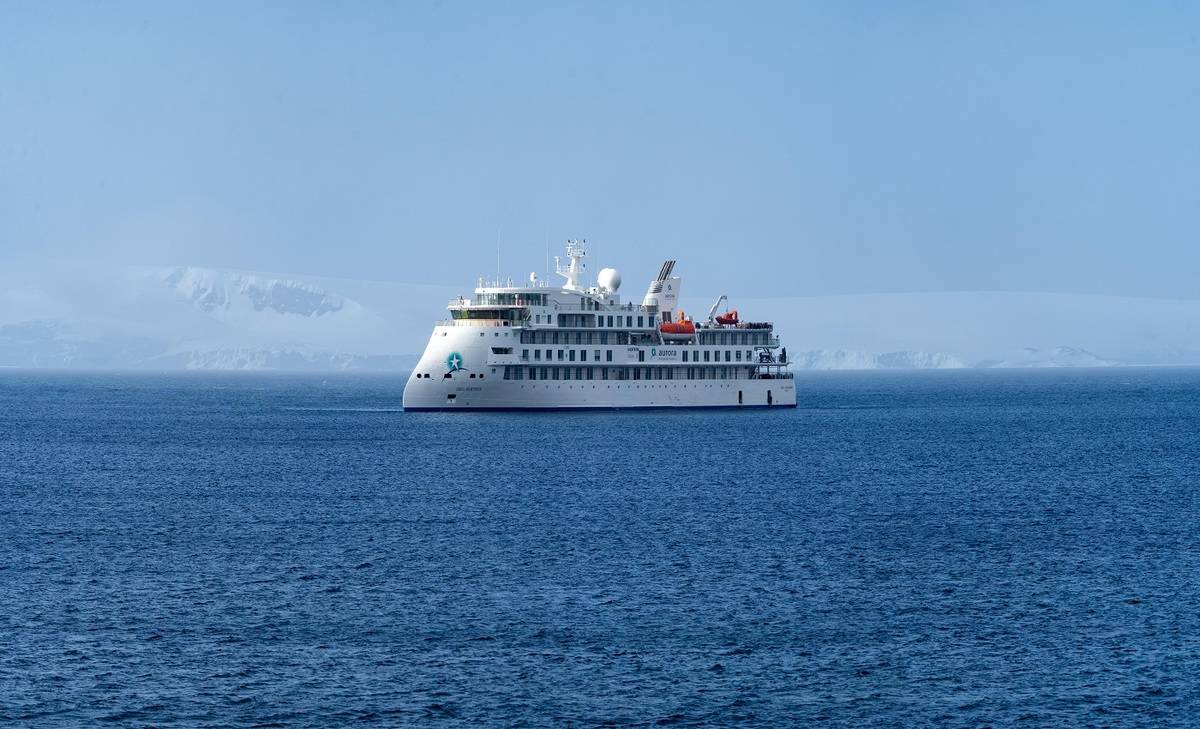 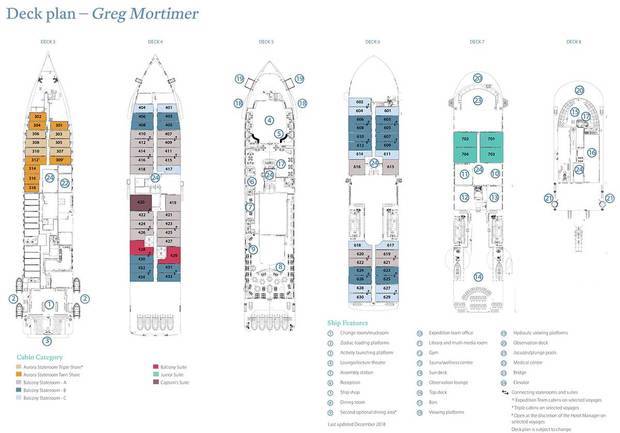