Set sail for an adventure that will make you the envy of your friends. Leaving Ushuaia in your wake, pass through huge penguin colonies in South Georgia and the surprisingly clement Falkland Islands, before stepping ashore remote Tristan da Cunha. Enjoy walks and talks with one of the island’s 300 hardy residents, or simply zip around in a Zodiac for a 360˚ view of what is surely one of the most sensational destinations on the planet.

NO OBLIGATION ENQUIRY
MAKE A BOOKING
Receive US$1000 onboard credit

Plus reduced deposit per suite. Contact us for details 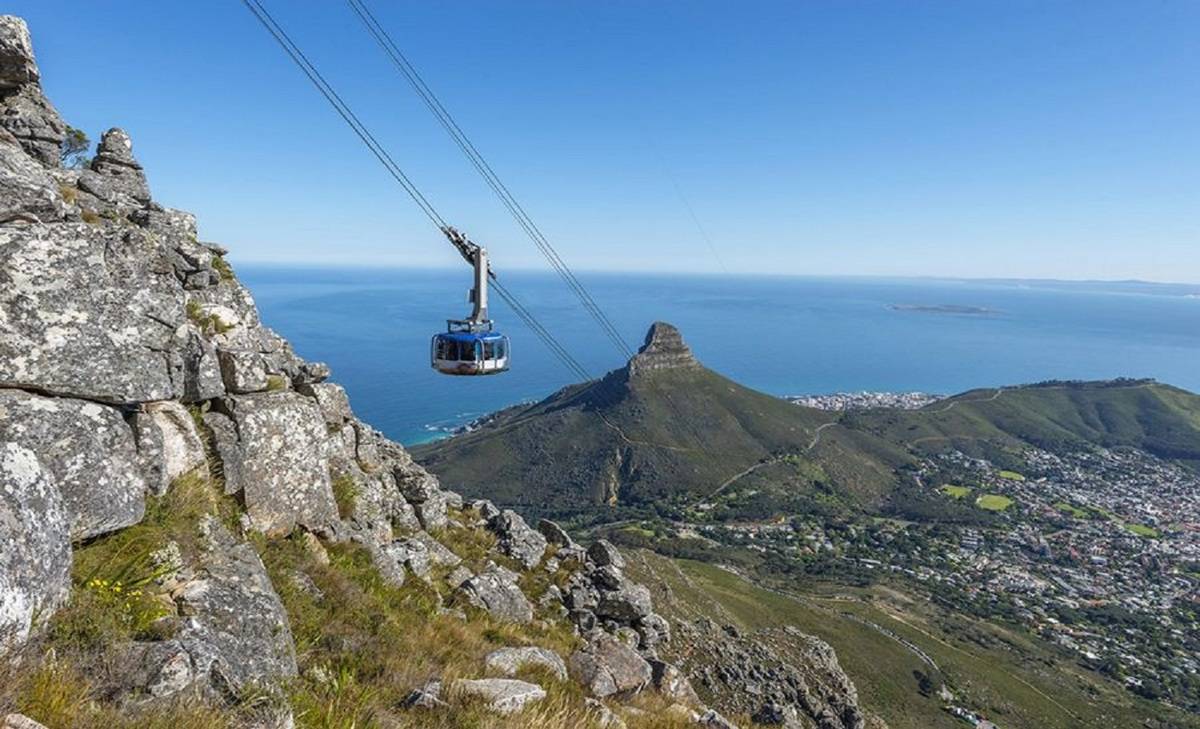 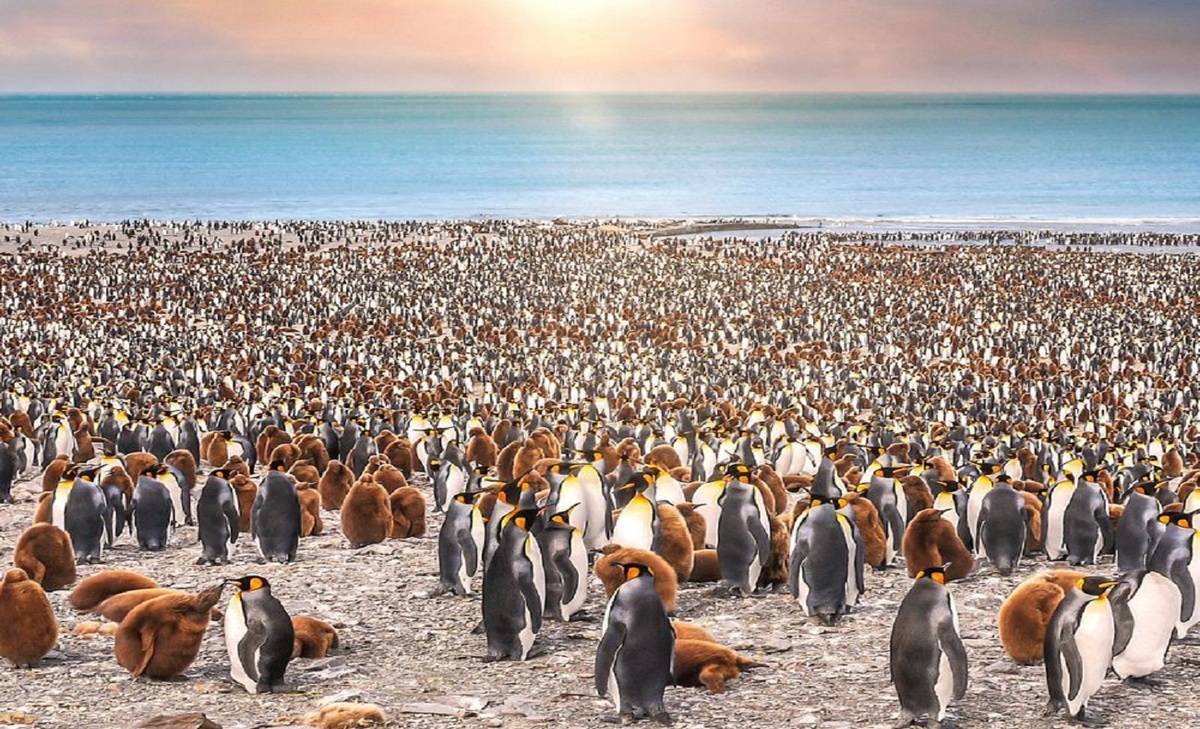 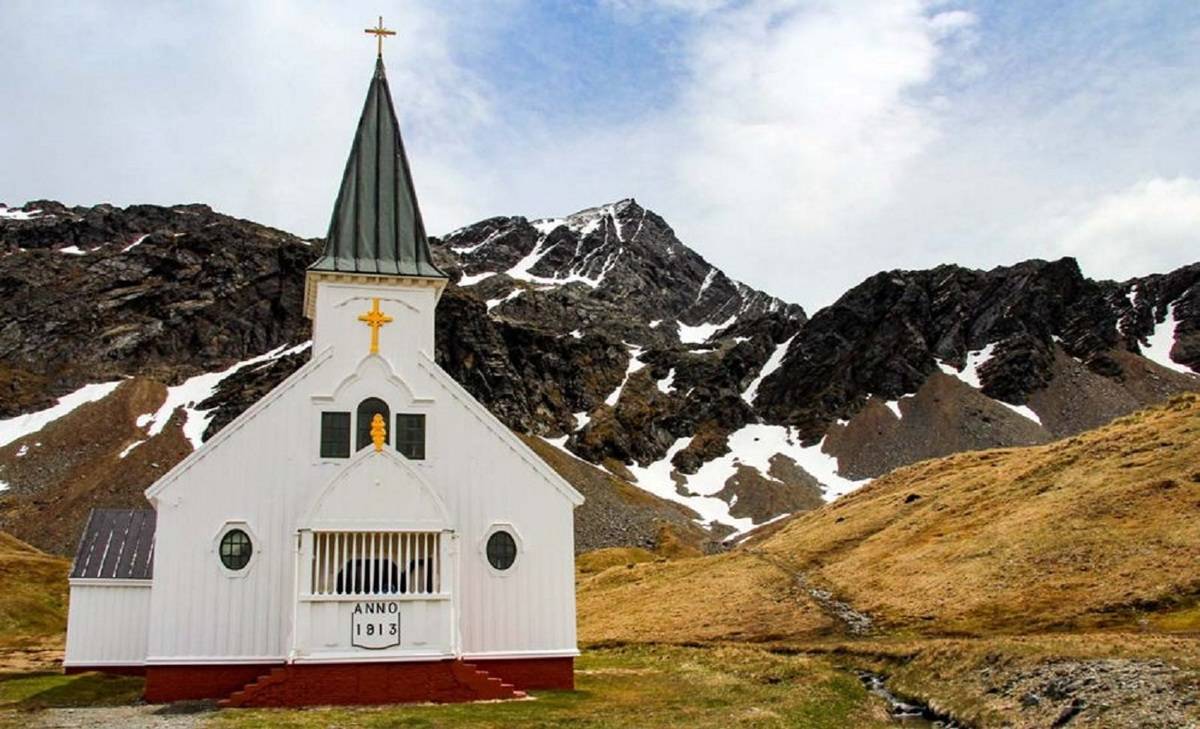 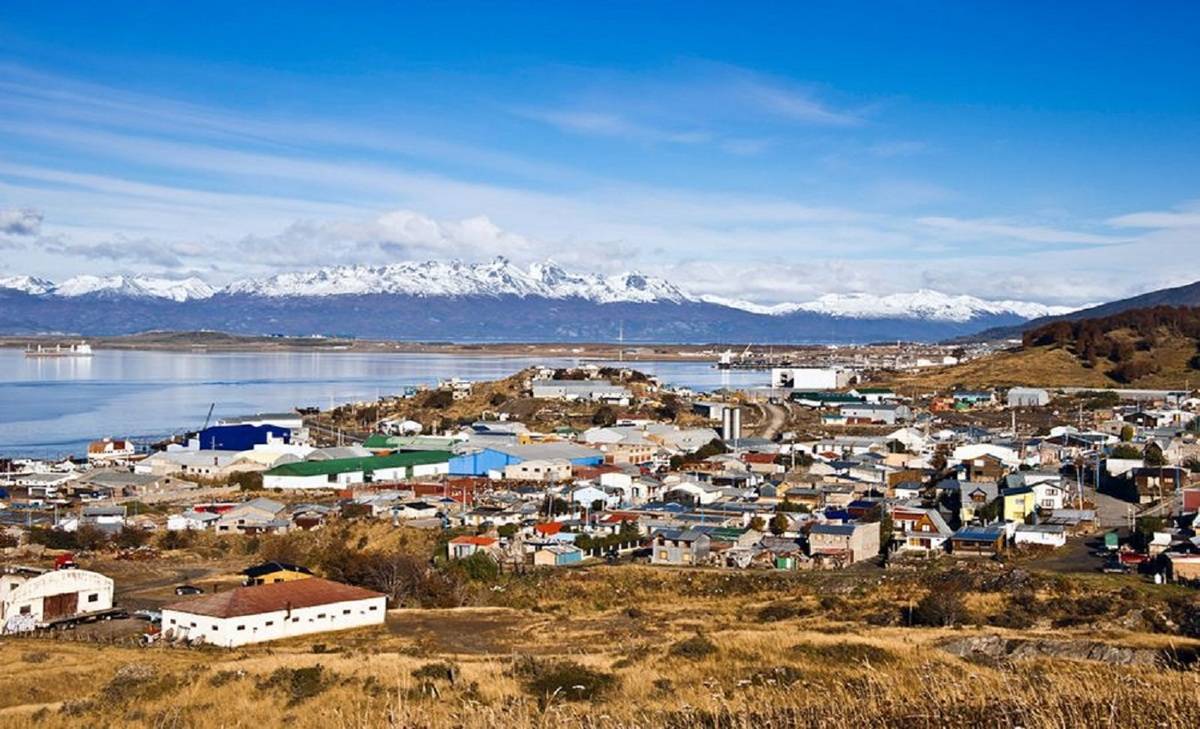 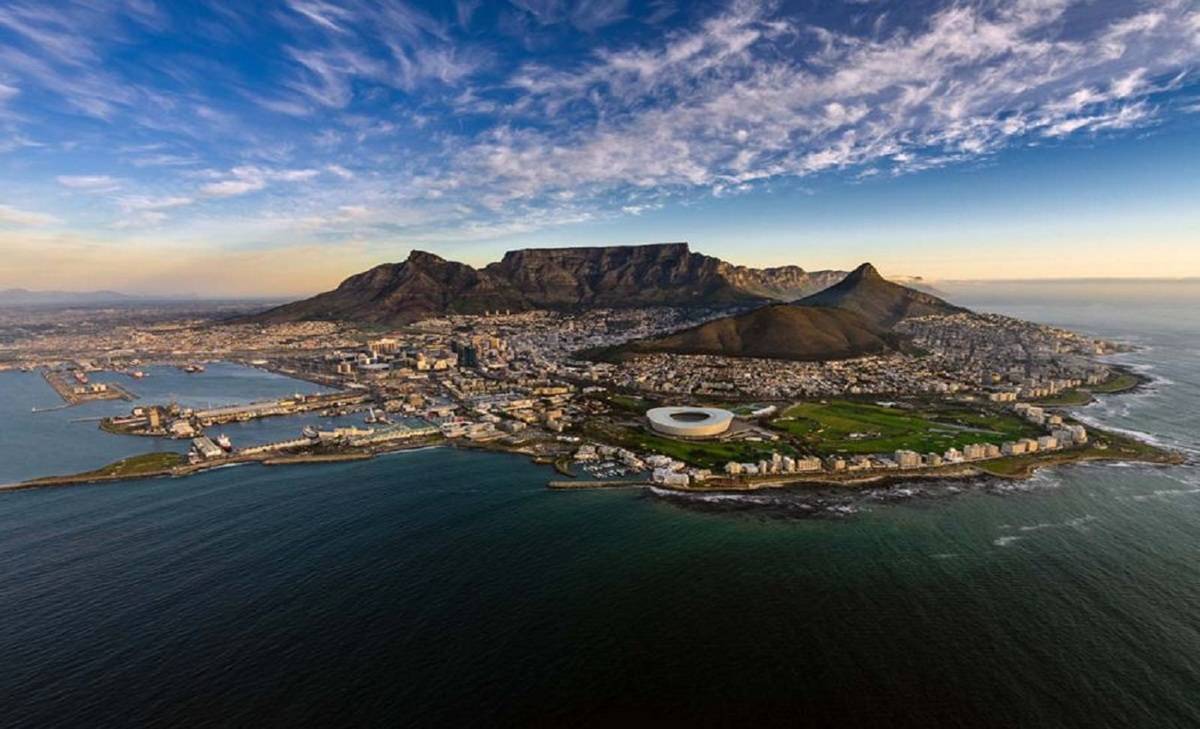 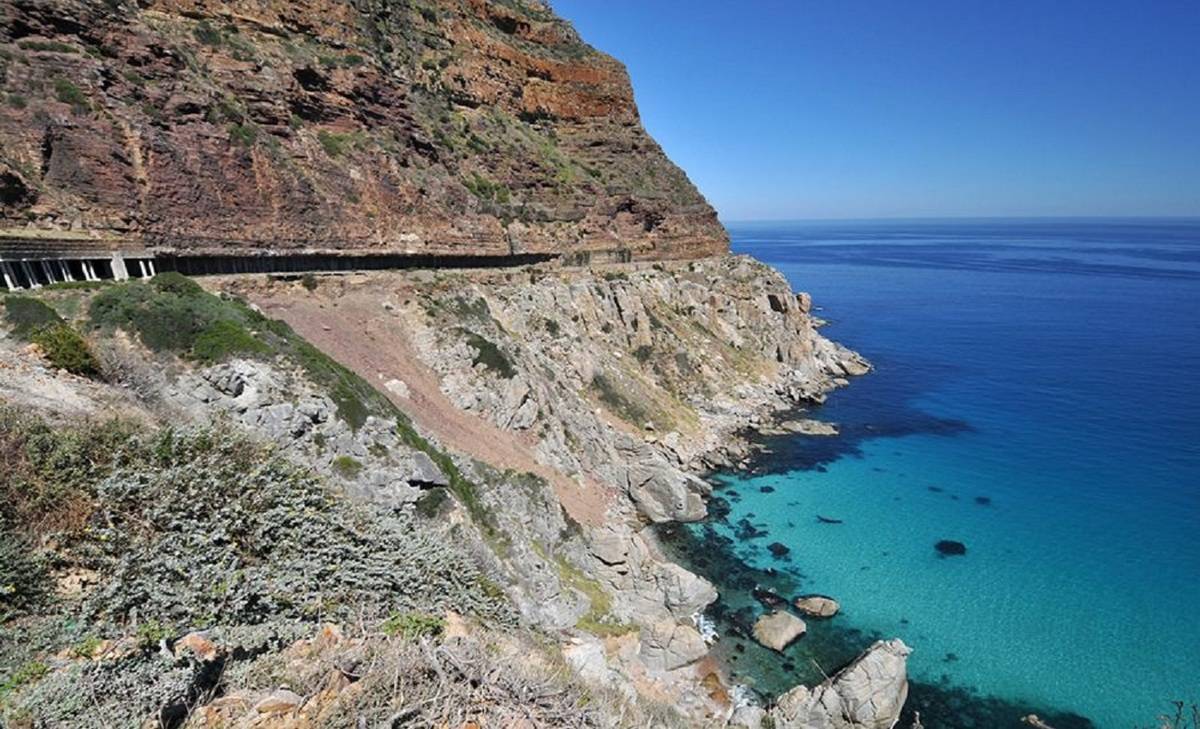 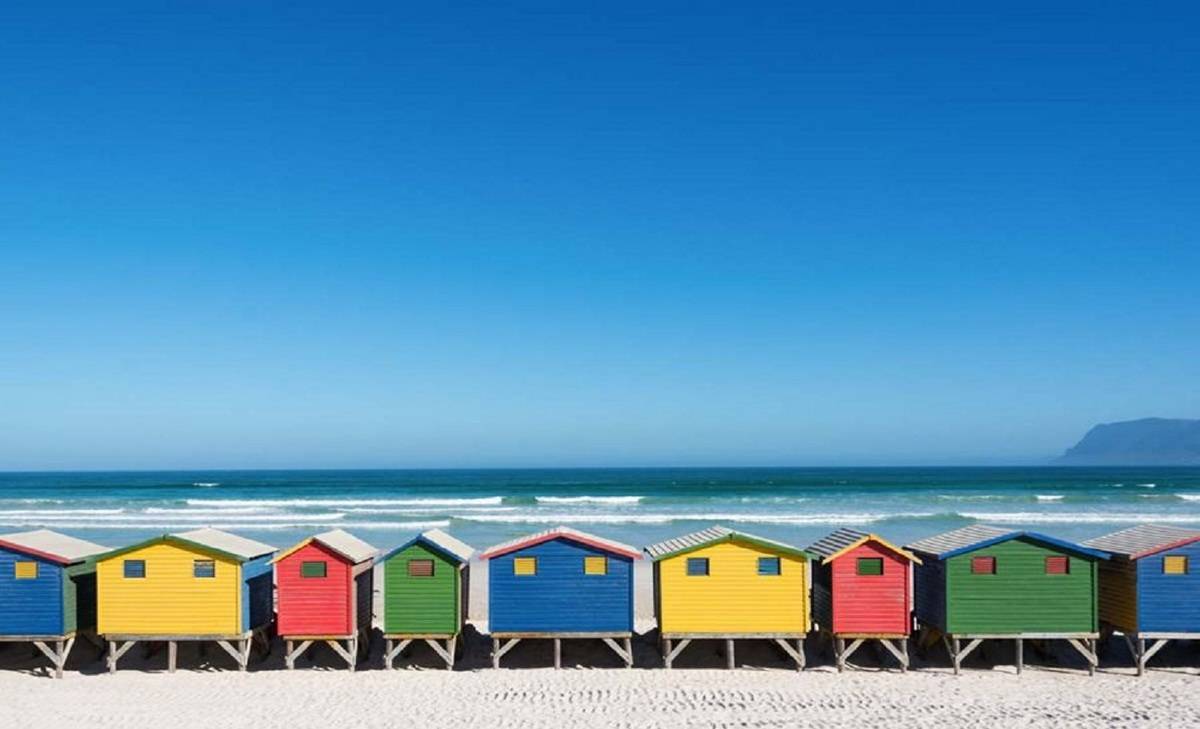 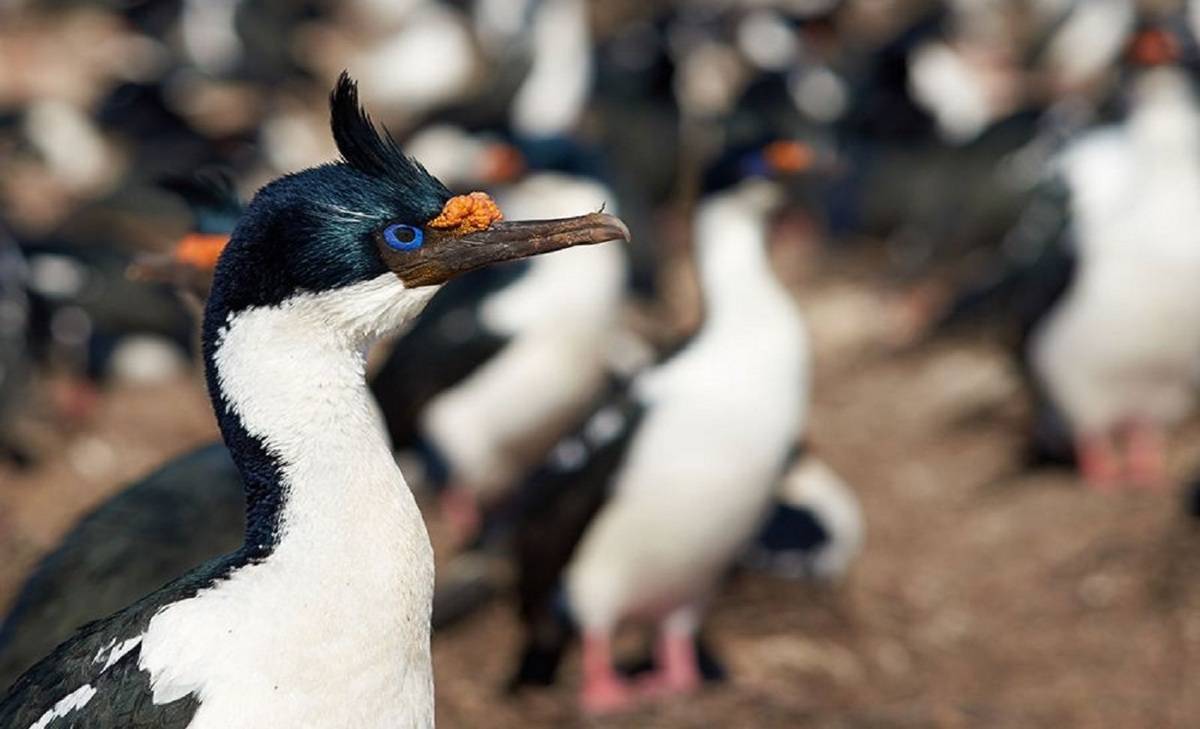 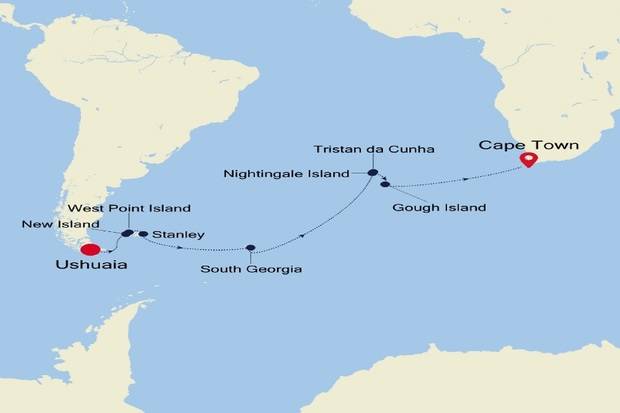 A southerly frontier - on the cusp of wild nature and extraordinary adventures - the excitement in Ushuaia is palpable. Prepare for memorable exploits amid the extremes of this southerly location - as you adventure into the colossal scenery of the fractured Tierra del Fuego and beyond. Known as the 'End of the World' Ushuaia looks out across the Beagle Channel, and is surrounded by the Martial Mountains to the north. Despite its remote location, Ushuaia is a surprisingly busy and lively resort, with lots to keep its visitors entertained. For many people, Ushuaia is their last glimpse of anything resembling a city, before they jump off the map into the wilderness, to answer the call of immense national parks or Antarctic expeditions. One of the most dramatic landscapes on the planet - Argentina's land of fire, National Park Tierra del Fuego, is a place of titanic natural forces and limitless beauty.

Remote and raw, New Island lies to the west of the Falkland Islands, and the humble human population here is far outweighed by the extraordinary birdlife that resides along its craggy coastline. Out in the tempestuous wilds of the South Atlantic Ocean, the island is a sanctuary of animal life - with crowds of rockhopper penguins, wrinkled seals and stern-looking albatross among its many residents. The penguins of the Falklands are a sight to see, fooling and falling on the beaches, before diving in and whipping through the waters. Home to five different species, including king penguins - who strut with their orange collars glowing against the pure white feathers of their chests. Sea lions, seals and elephant seals bark and lumber along the shoreline, while sleek orcas patrol and Peale’s dolphins cut through the waves.

A north-westerly outpost of the scenic Falkland Islands, you'll be welcomed ashore at West Point Island by the calls and cries of a huge colony of black-browed albatross. Indeed, the island was originally known as Albatross Island before being renamed to reflect its geographic location. While the albatrosses - that flash white feathers in the rugged cliffs above the waves - are the most well known residents, they are far from the only animal inhabitants of this remote, isolated land. A huge army of birdlife calls the island sanctuary home, overwhelming the tiny human population and sheep that roam West Point Island's grasses. Meet the rockhopper penguins who scamper and burrow along the coast's boulders, as well as the imperial cormorants who rest here in great numbers. You're also liekly to encounter Magellanic penguins during your explorations. Hike the island's quiet landscapes, and look out for endemic plants like Felton's flower carpeting the green interior.

A true haven for wonderful, diverse wildlife watching, Stanley invites you ashore to soak in the untouched beauty of the Falkland Islands. Rolling farms and animal-covered coves and cliffs unravel nearby, while reminders of the war that scarred these islands in 1982 also reveal themselves on closer inspection. The Falkland Islands - a tiny, southerly outpost of the United Kingdom - lie a long way from the nearest land at Patagonia, and their isolated location has helped to maintain this unblemished, unhurried world of wonderful animals and wind-whipped scenery. The ghostly, rusting wreck of the Lady Elizabeth ship welcomes you into port - and is a reminder of the historically treacherous nature of these 740 islands' remote location. Stanley sits as the capital, and even here there’s a quiet village ambience, as you wander quaint streets below colourful roofs.

South Georgia is a breathtaking destination of towering snow-covered mountains, mighty glaciers, and low-lying grasslands that attract an astounding concentration of wildlife. It is possible to find Southern fur seals, Southern elephant seals and a variety of albatross species including Black-browed, Light-mantled Sooty, Grey-headed and the spectacular Wandering Albatross, plus thousands of King and Macaroni Penguins. South Georgia is also linked to the early Antarctic explorers. Captain James Cook first stepped ashore in 1775, but perhaps more famous is Ernest Shackleton’s arrival in 1916 following the sinking of his ship Endurance. Shackleton’s grave and the whaling museum at Grytviken are highlights, as would be a visit to one of the King Penguin colonies at Salisbury Plain or Gold Harbour.

Sailing to these lonely volcanic islands feels a little like dropping off the map, as you aim for the seemingly endless ocean horizon. A true adventure, the journey rewards generously, as you track down the world's most remote archipelago, and discover its incredible, endemic birdlife. A full 1,500 miles away from the nearest neighbour, St. Helena, it's fair to say that the Tristan Da Cunha archipelago is a long way off of the beaten path. Venture to the only inhabited island, where a hardy 250 souls live out their lives. Tristan Da Cunha was first discovered at the beginning of the 16th century by Portuguese explorer Tristao da Cuhna - who named the island after himself. He was unable to actually step out onto its land, however, as the waves churned violently below his ship, rendering the shores inaccessible.

Uninhabited except for the majestic, million-plus seabirds that call this castaway island home, it doesn't get much more raw and remote than Nightingale Island. Adrift between South America and Africa, in the Tristan da Cunha archipelago, the island takes its name from British explorer Gamaliel Nightingale and is the smallest of these distant volcanic lands. Craggy coastline and rugged cliffs rise imposingly from the waters of the South Atlantic, as you approach this remote volcano island - which erupted most recently in 2004. Largely free from human interference, Nightingale Island is known for the abundant birdlife that thrives here and is a shelter for some of the world’s rarest species. Designated as an Endemic Bird Area and an Important Bird Area, the island's birds are awarded special protection, and only select visits to these shores are permitted.

Gough Island in the South Atlantic Ocean was originally known as Gonçalo Álvares (named after the captain of Vasco da Gama’s flagship). The volcanic island is uninhabited except for the handful of personnel stationed here to operate a South African weather station, making it one of the most remote places with a constant human presence. Gough Island and Inaccessible Island comprise the UNESCO World Heritage Site of Gough and Inaccessible Islands as they are protected wildlife reserves and an “Important Bird Area”. Gough Island is home to Tristan Albatrosses, Atlantic Petrels, Gough Moorhens, Gough Buntings, and Northern Rockhopper Penguins; just some of the many birds using this mid-Atlantic island as their nesting ground.

Sprawling across endless, staggeringly blue coastline, and watched over by the iconic plane of Table Mountain, Cape Town is without doubt one of the world’s most beautiful cities. A blend of spectacular mountain scenery, multiculturalism and relaxed ocean charm awaits in the Mother City, where you can venture out to rolling vineyards, dine in laid back sea suburbs, or spend days exploring cool urban culture. Cape Town’s natural splendour fully reveals itself as the cable car rears sharply to the top of Table Mountain. From the summit, 3,500 feet above sea level, you can let the scale of the panoramic vistas of the city rolling down towards the ocean wash over you. Another heavenly perspective waits at the top of Lion's Head’s tapering peak. A sharp hike and an early start is required, but the views of the morning sun painting Table Mountain honey-gold are some of Cape Town’s finest.

Today you will disembark your ship in Cape Town. 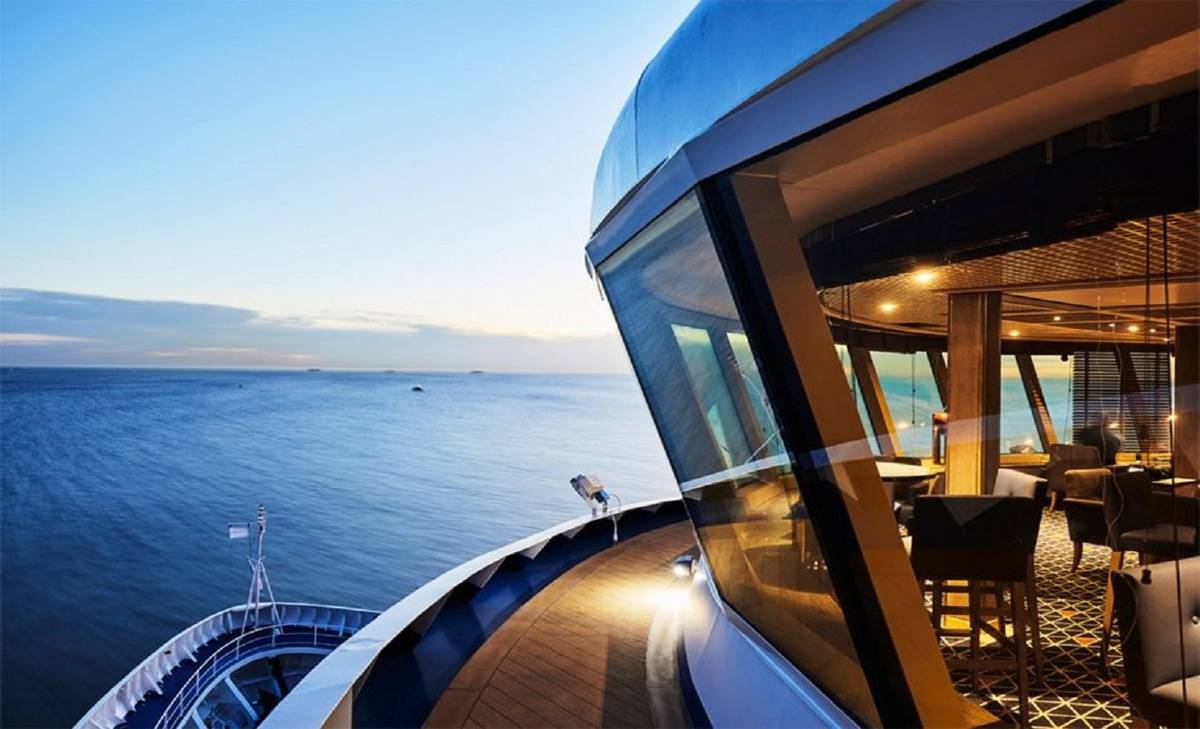 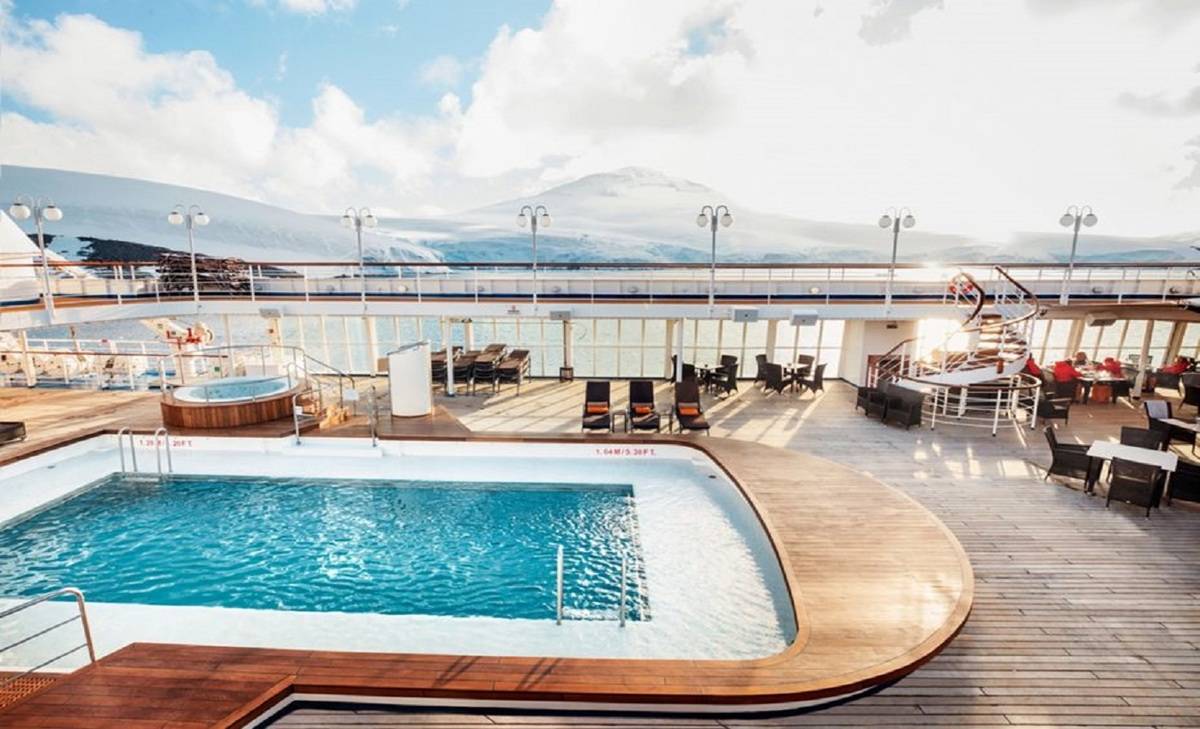 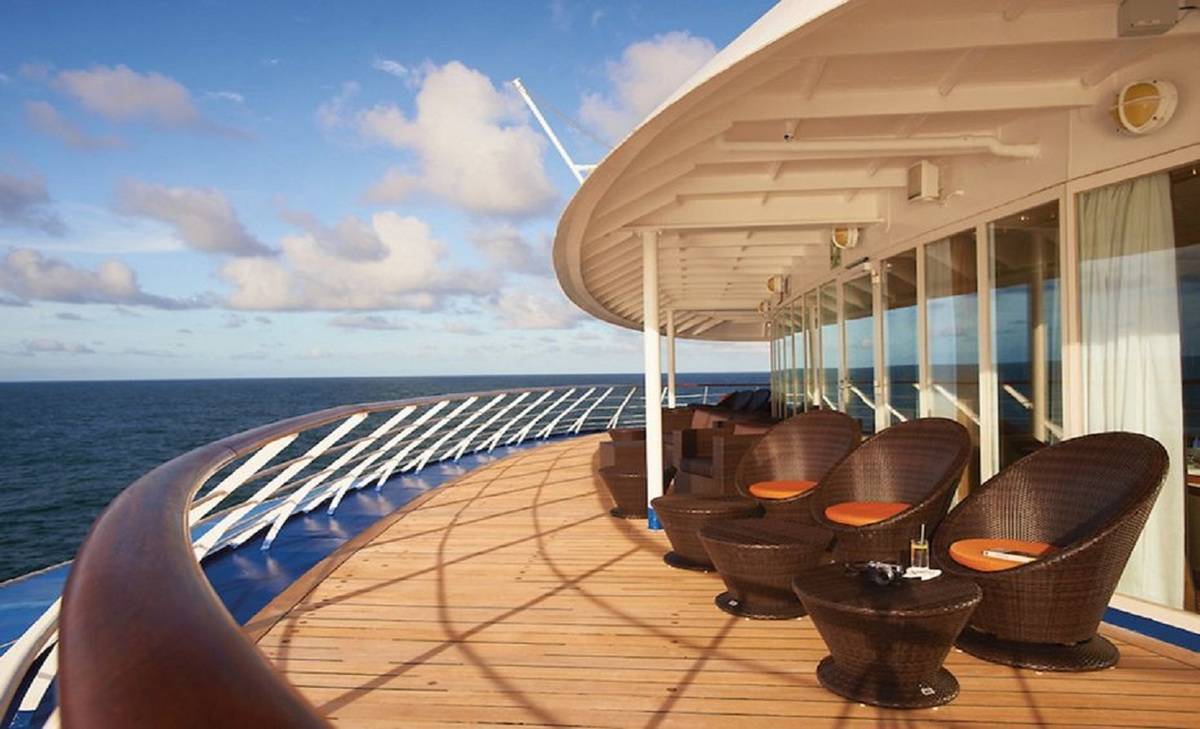 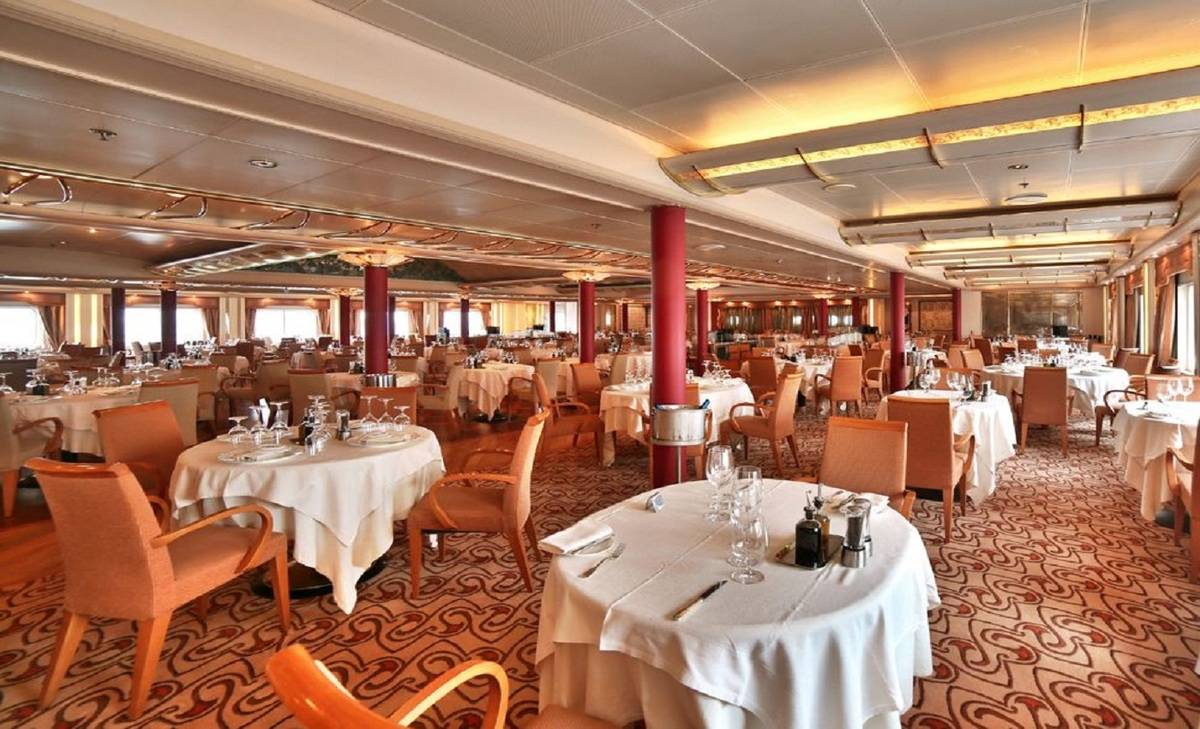 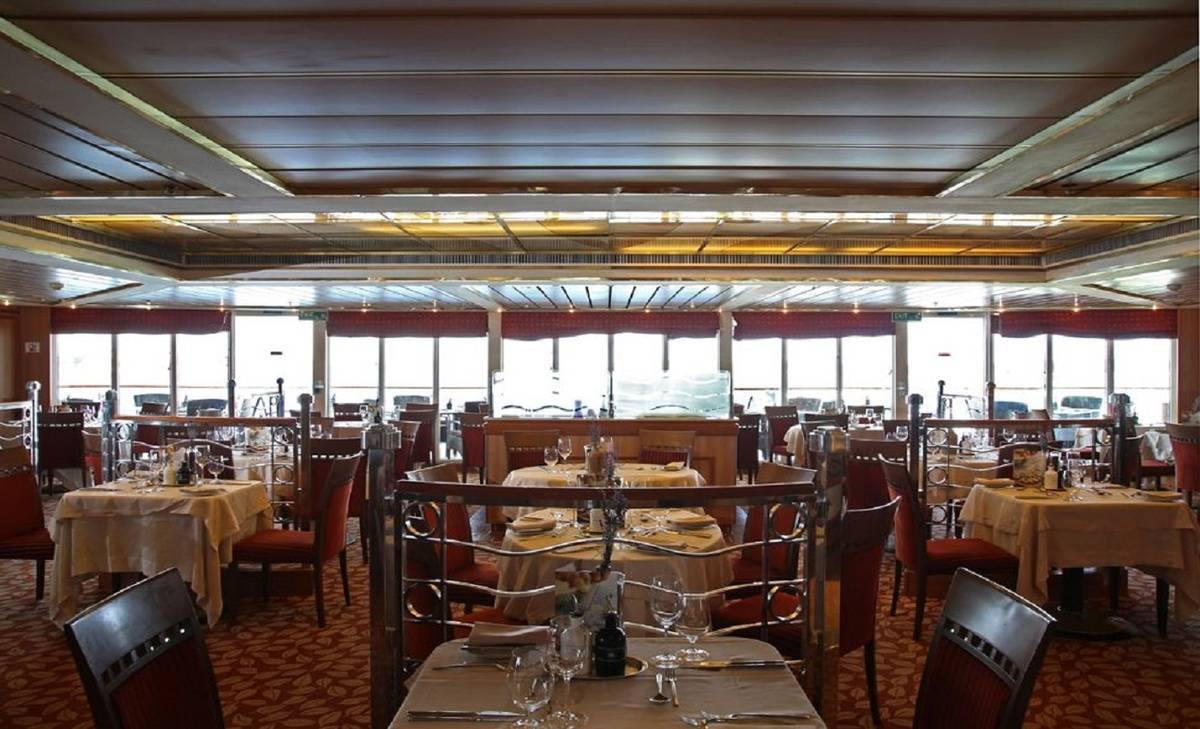 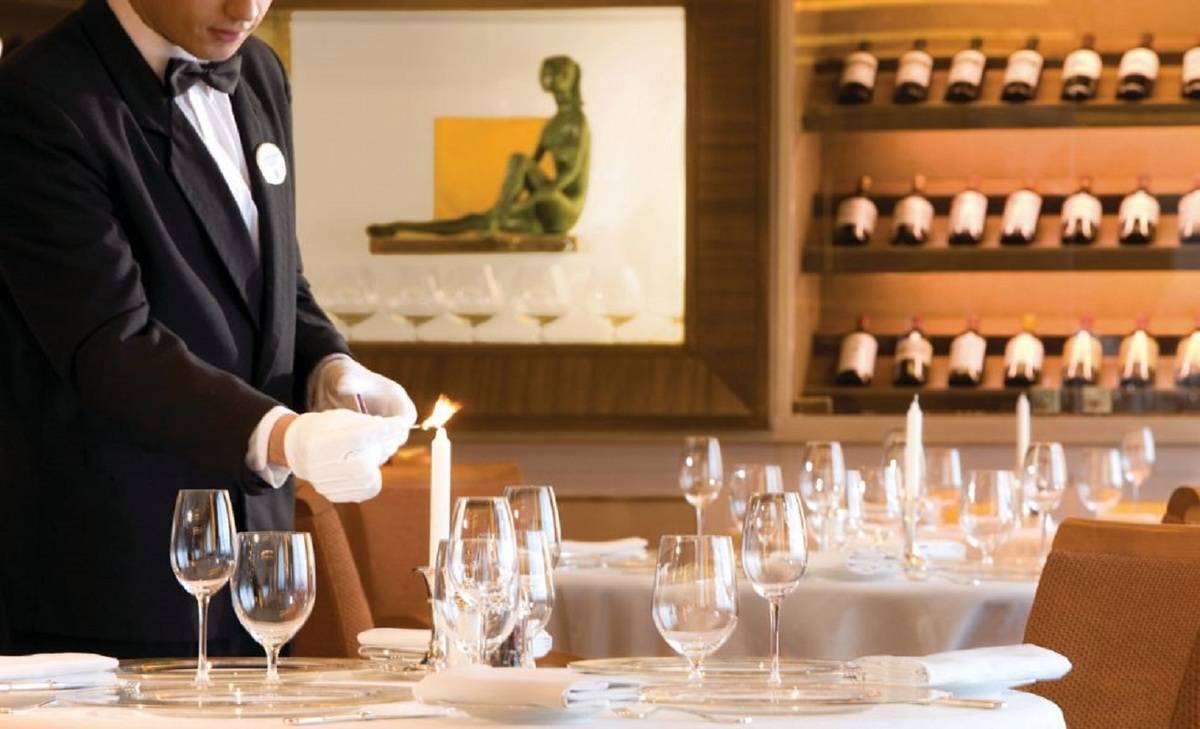 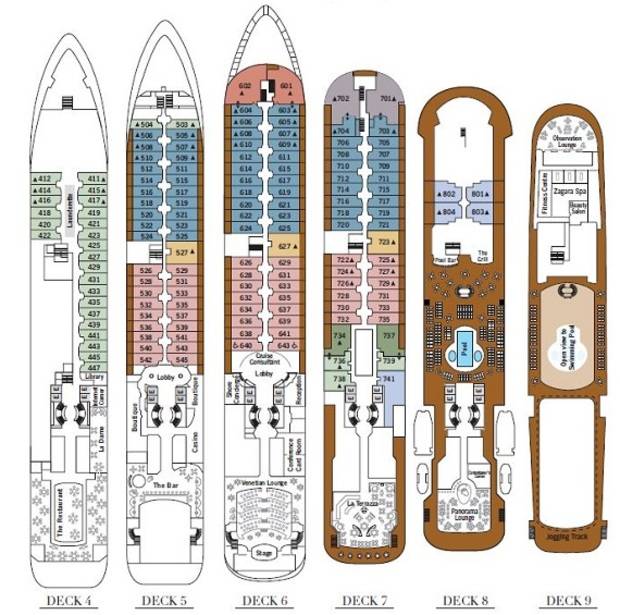