Sea of Okhotsk - Seals, Seabirds and a Legacy of Sorrow

This is a truly unique journey in that it travels through a little known and seldom visited region. A region with a rich history and very significant and important wildlife values, both terrestrial and marine. There are still discoveries to be made and so for the inquisitive, adventurous and open minded traveller this is a ‘must do' expedition.

Seabird numbers in the Sea of Okhotsk can only be described as spectacular. There are islands like Talan where the sky darkens when the Crested Auklets start massing offshore of an evening. Other birds include guillemots, puffins, auklets and fulmars. But the richness of birdlife is not restricted to pelagic species. The Sea of Okhotsk has one of the highest concentrations of the majestic Steller's Sea Eagle of anywhere in the Russian Far East. Waterfowl are common as are many migratory species. Harder to see but not uncommon on this expedition are the magnificent Kamchatka Brown Bear and other mammals such as the Arctic Ground Squirrel.

Home » Spirit of Enderby: Sea of Okhotsk – Seals, Seabirds and a Legacy of Sorrow 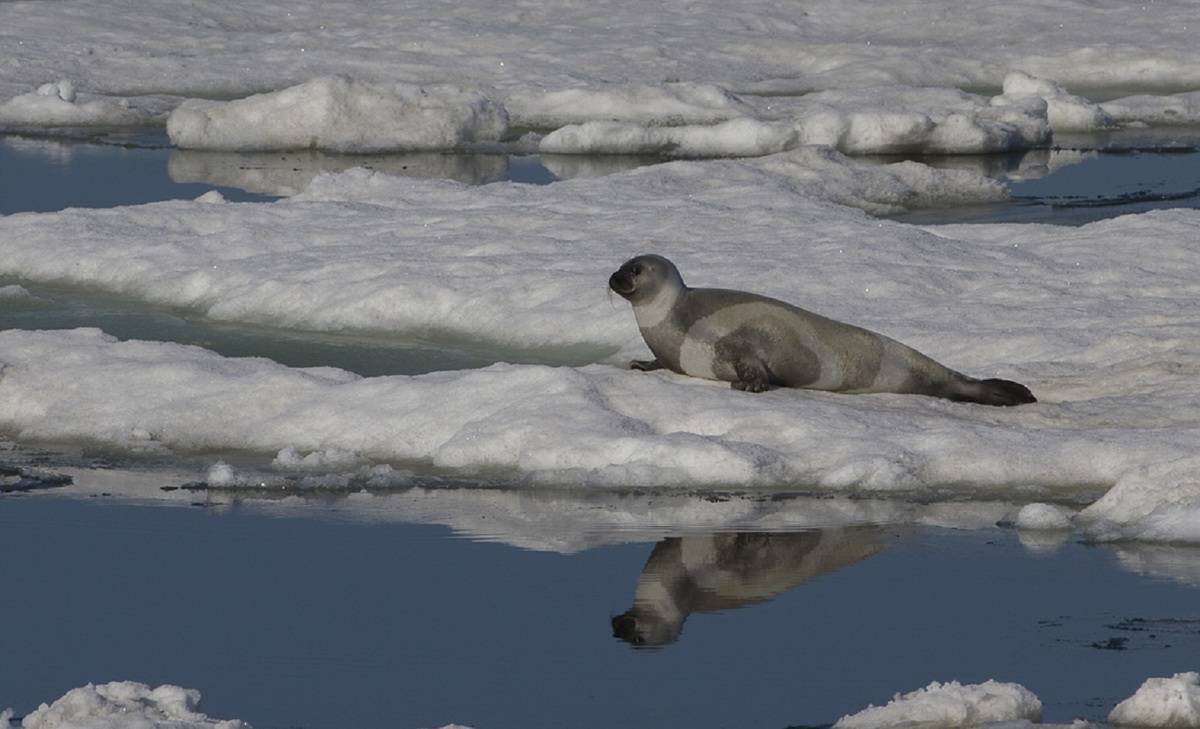 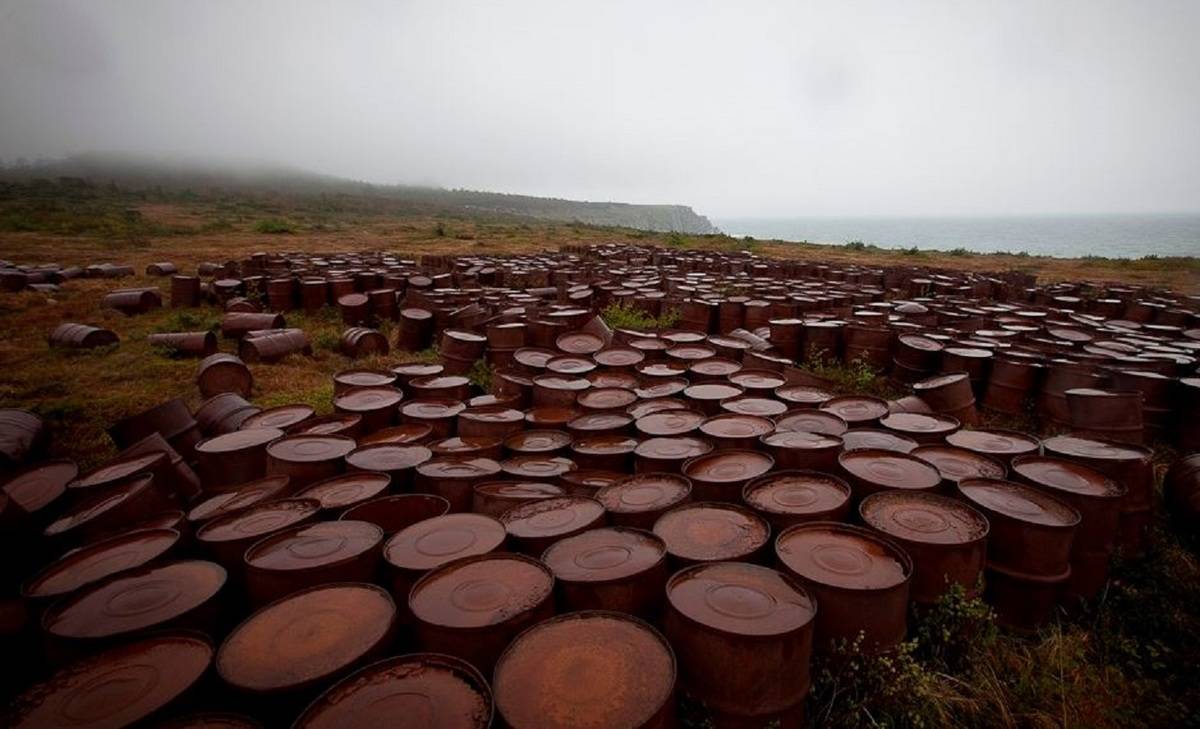 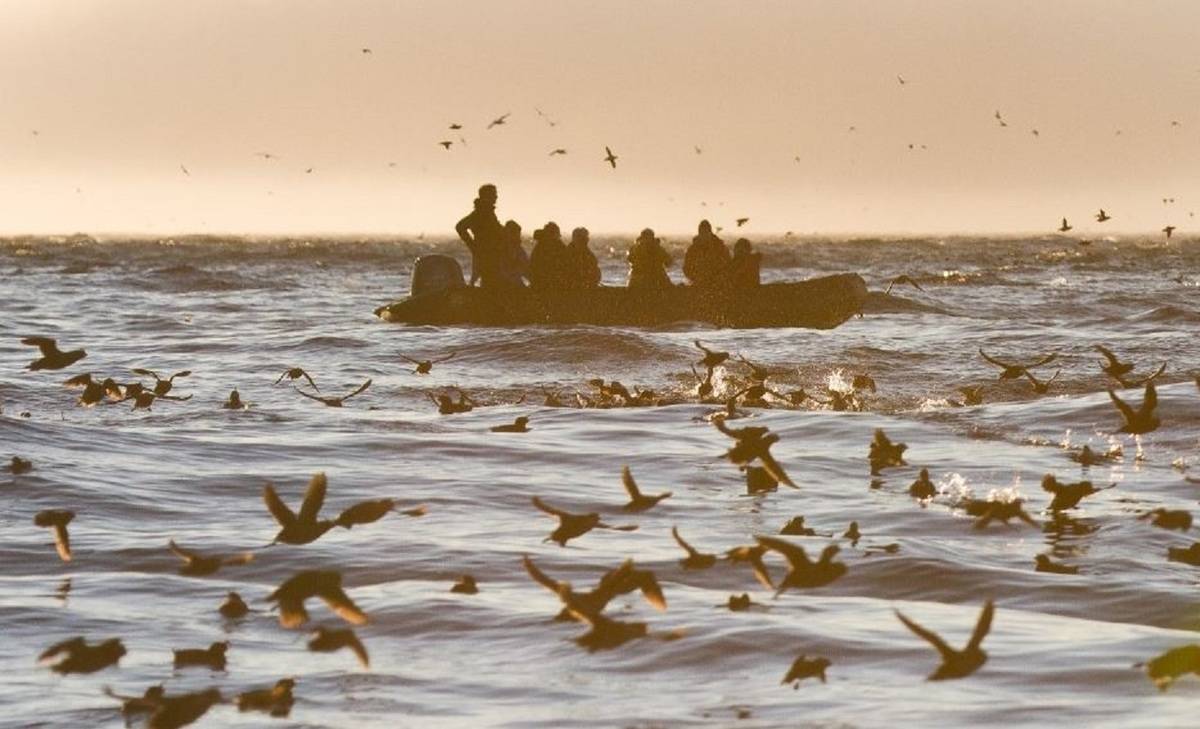 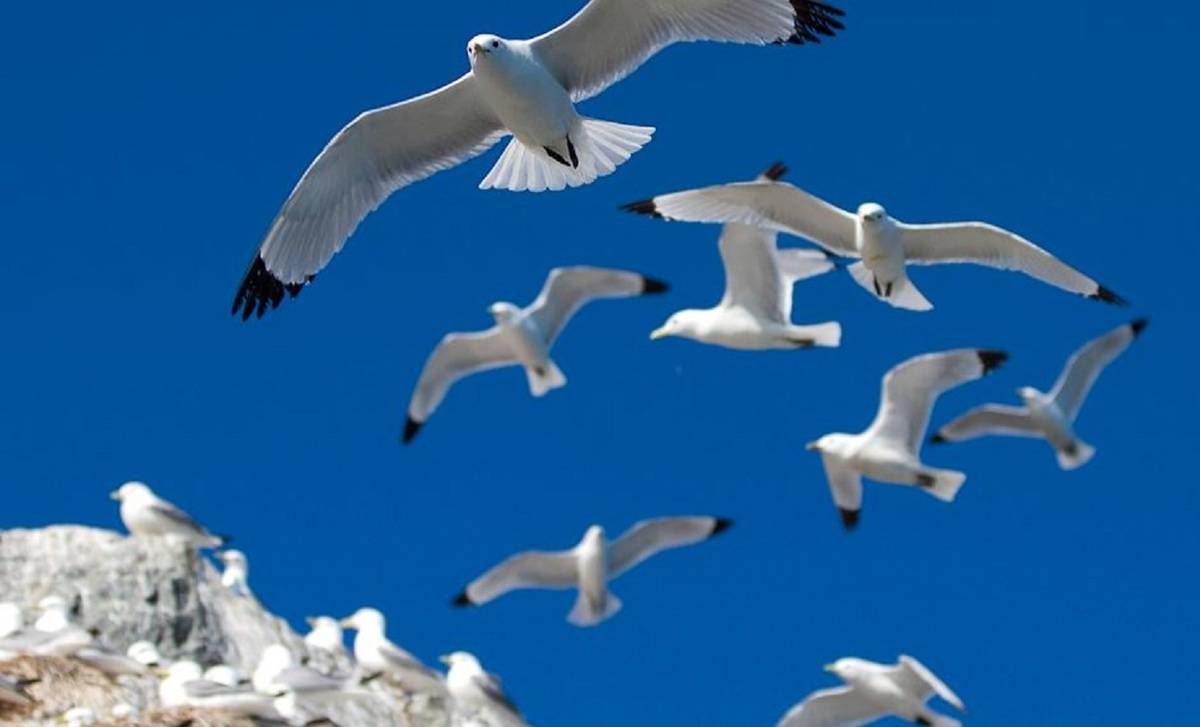 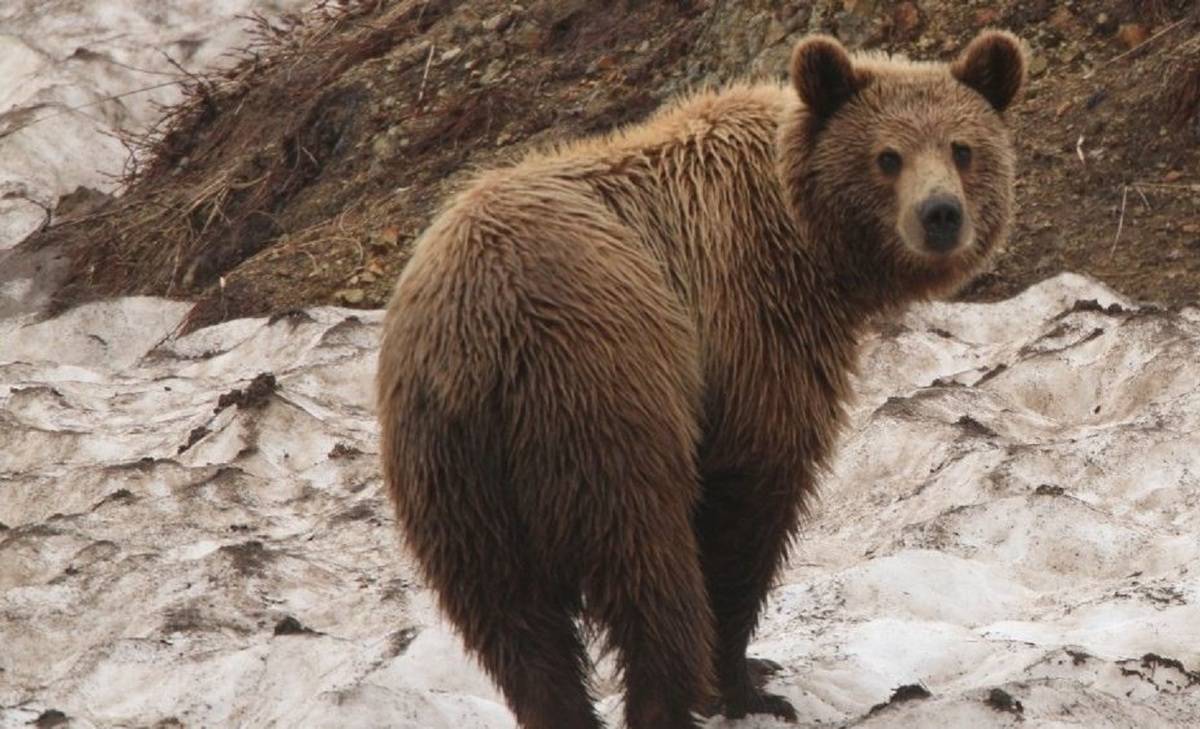 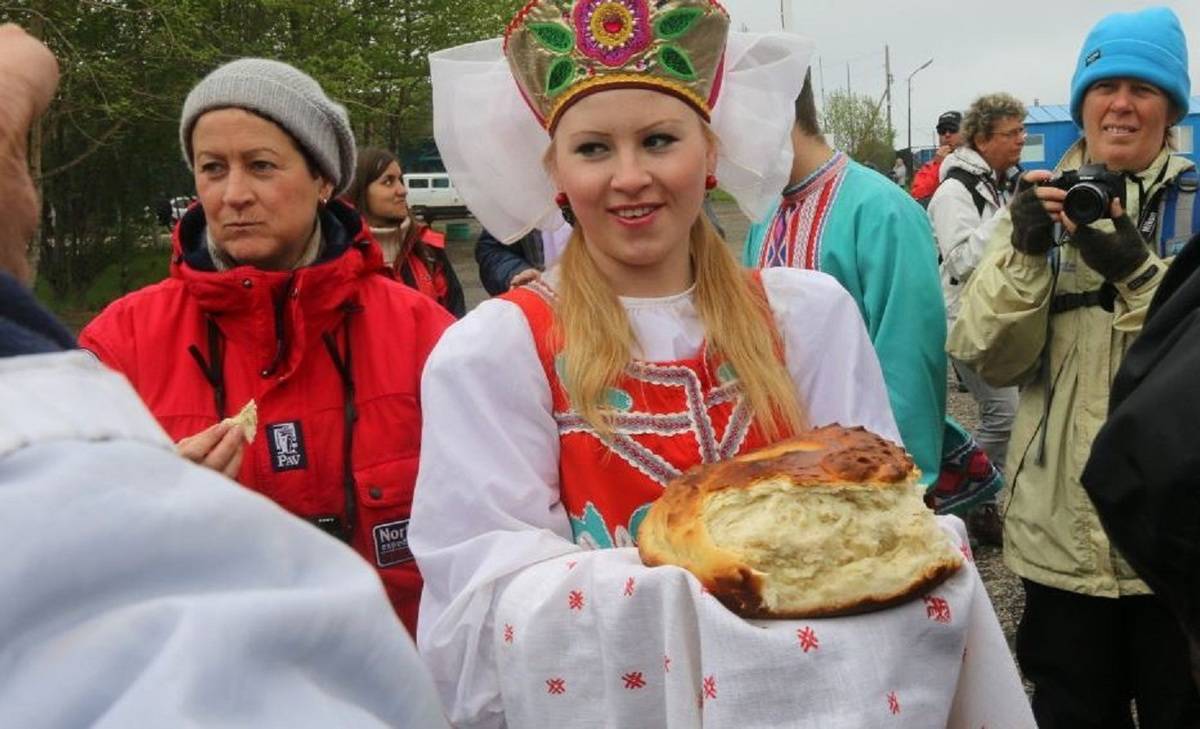 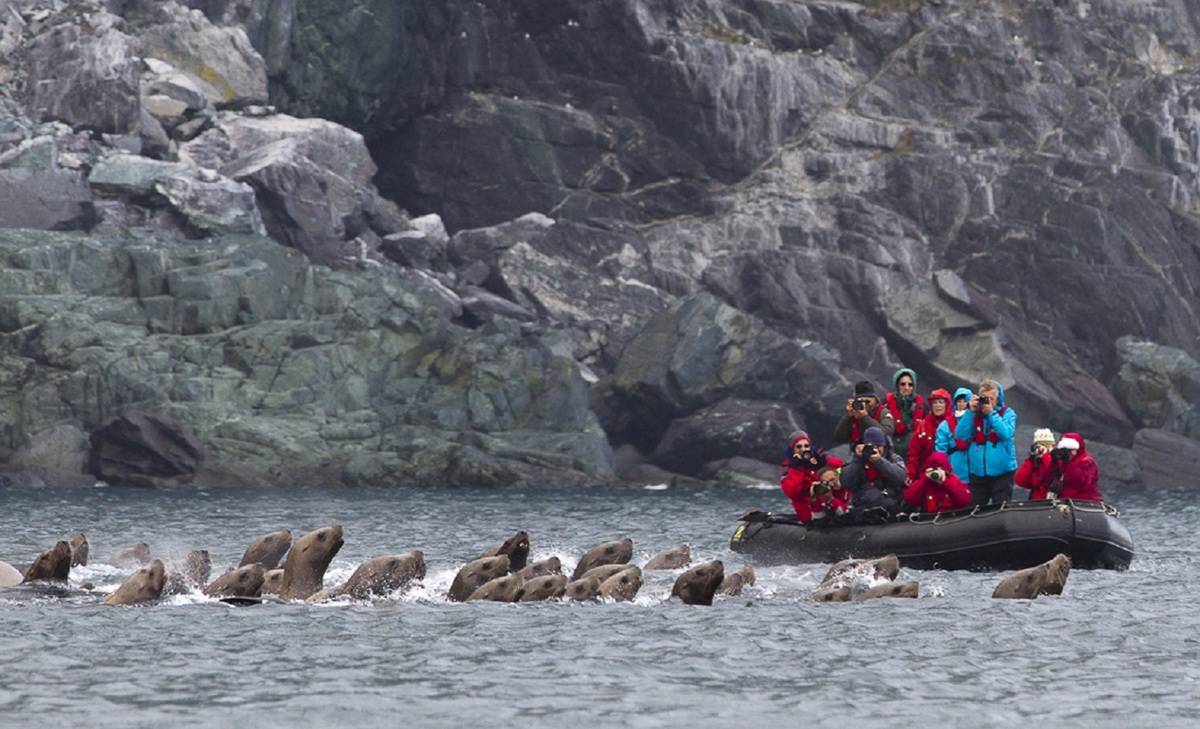 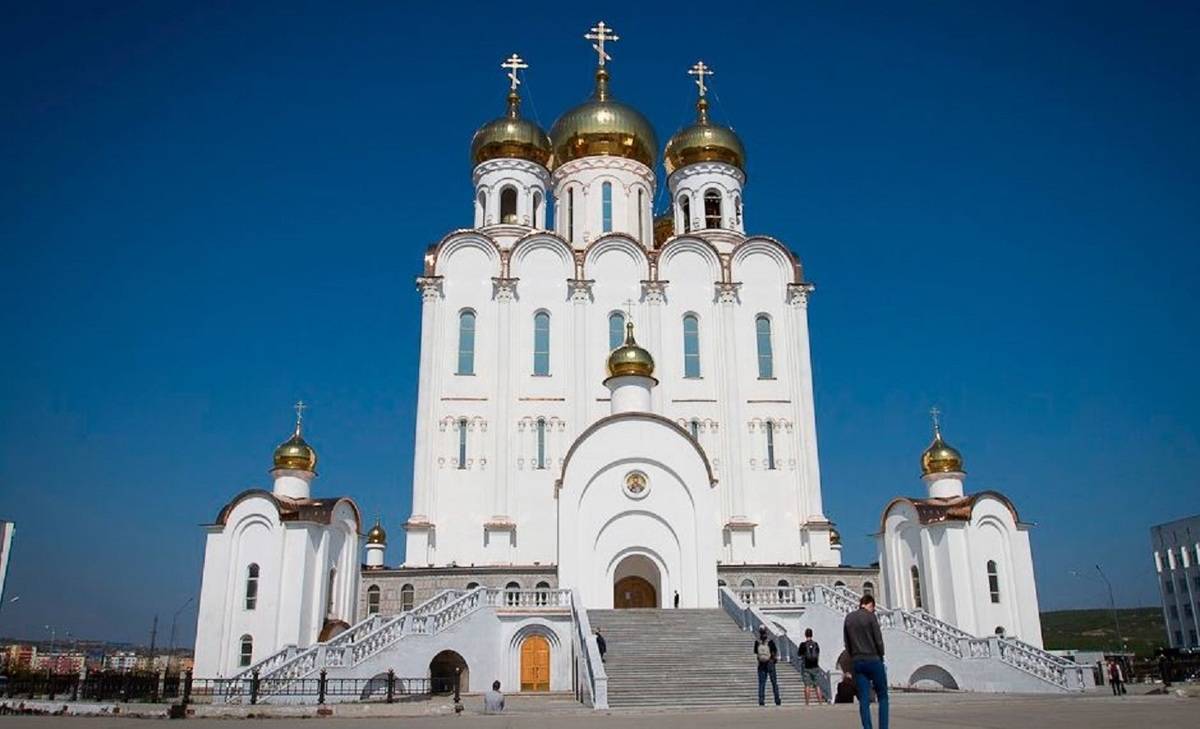 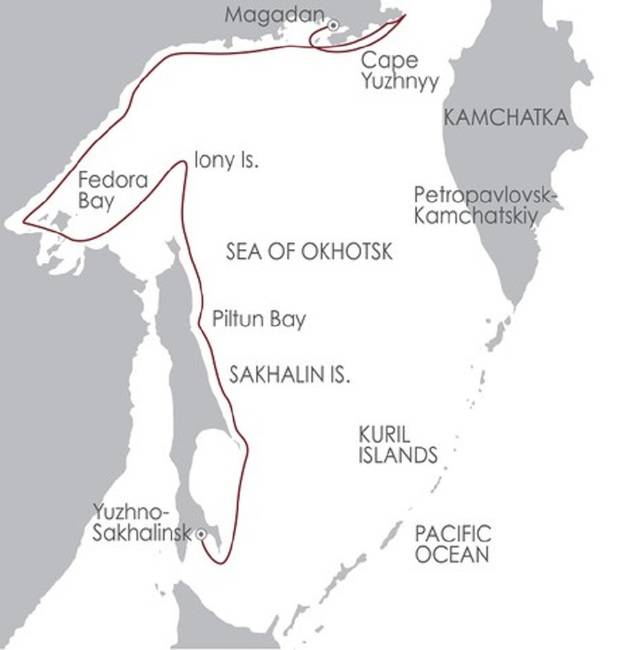 This morning we board a coach for transfer to the Port of Korsakov some 40 minutes south of the city of Yuzhno-Sakhalinsk where we will board the Spirit of Enderby. Once on board you will be shown to your cabins and there will be a chance to unpack and explore the vessel. There will be briefings and introductions to the ship, staff and crew after we sail towards the Sea of Okhotsk.

We visit little known Tyuleniy Island off the south east coast of Sakhalin Island. This small island is a strong hold for Northern Fur Seals and Steller Sea Lions. Fur seal numbers have increased since an International Covention signed in 1911 banned seal hunting here. In the 1990s Steller Sea Lions started breeding on the island and their colony now numbers about 2,500 animals. Sea conditions permitting we plan a landing here for an opportunity to photograph the seals and sea lions.

It was the discovery of oil and gas in this region which put Sakhalin Island on many people’s maps. Piltun Bay is an important habitat for the small population of Western Gray Whales. Researchers monitor the population during the summer months. We go in search of the Gray Whales that live here, travelling by Zodiac inshore to the shallower waters where they are known to feed.

Iony Island lies in the middle of the Sea of Okhotsk, it is really just a rock, but what it lacks in physical size it more than makes up for wildlife. Birds appear to take up all available space; there are guillemots, kittiwakes and various species of auklets, with Parakeet, Whiskered and Least being the most prominent. We will Zodiac cruise around the island as Steller Sea Lions occupy the few rocky beaches, making any landing impossible.

Lying in the western sector of the Sea of Okhotsk close to the continent, the islands in this archipelago are amongst the last place in the Sea of Okhotsk to become ice free each year. This late ice can sometimes restrict how far we can explore here; on the other hand ice increases our chances of seeing some of the seals including Bearded, Ringed, Largha and Ribbon Seals that breed here. If we can land there will be birding, botany and photography excursions led by our team of on board naturalists.

Here there are birds everywhere, in the air, in the water and on the land. Numerous species breed here including large numbers of Spectacled Guillemots. Other species include Ancient Murrelet, Rhinoceros Auklet, Parakeet Auklet, Horned and Tufted Puffin, Crested Auklet and both Common and Brunnich’s Guillemot. There is also a good population of Steller’s Sea Eagles on the island and on the adjacent mainland. Landing on the island is restricted to a small gravel spit; however on the mainland we can stretch our legs and explore the taiga forest.

This town has featured in Russian Far East history since the earliest Cossack explorers came from the west. Vitus Bering travelled overland from St Petersburg to Okhotsk in 1725 and again 1733 and travelled to Kamchtka and beyond. Today Okhotsk is the centre of fishing in the region. The port exports significant quantities of salmon and other fish. We visit the town, landing by Zodiac up the river near the town centre. The local people are generous and welcoming and will provide entertainment in the town centre and a cultural display.

An internationally known, but very difficult bird island to get to, Talan is famous largely because of the hundreds of thousands of Crested Auklets that nest there. There are also an extraordinary number of Black-legged Kittiwakes nesting along the cliffs and not surprisingly a large population of Steller’s Sea Eagles. We plan to circumnavigate the island by Zodiac before landing and then return in the late evening to witness the huge flocks of Crested Auklets amassing at sea before coming ashore.

This is a mountainous region to the south-east of the town of Magadan, part of which is included in the Magadanskiy Zapovednik Reserve. This reserve protects among other animals brown bear and Snow Sheep. Many of our landings are expeditionary, in that although we have landed at a number of places along the coast, many will be new and unknown to us, so we are never quite sure what we will find. That is part of what makes this style of travel so interesting.

These islands are claimed by some biologists to be the largest bird colony in the North Pacific. According to bird counts there are an estimated 7 million birds nesting on Matykil Island, the largest in the group. Birds include Common and Brunnich’s Guillemot, Crested, Parakeet and Least Auklets, Tufted and Horned Puffins and Northern Fulmars. The most abundant of these is the Least Auklet. We Zodiac around the coast as no landings are permitted.

The name Magadan is synonymous with Stalin’s oppressive Gulags or prisons but there is very little evidence now of this town’s tragic past. The local museum has an excellent display about the Gulags but the most poignant reminder is the ‘Mask of Sorrow’ a large monument on a hill overlooking the town. Today Magadan is a town of about 100,000 people. Fishing is important and gold mining is experiencing a revival. The infamous Kolyma Highway or the ‘Road of Bones’ connects Magadan with Irkutsk and ultimately greater Russia. We plan to arrive here midday where our journey ends. You will be transferred to a central hotel or the airport. 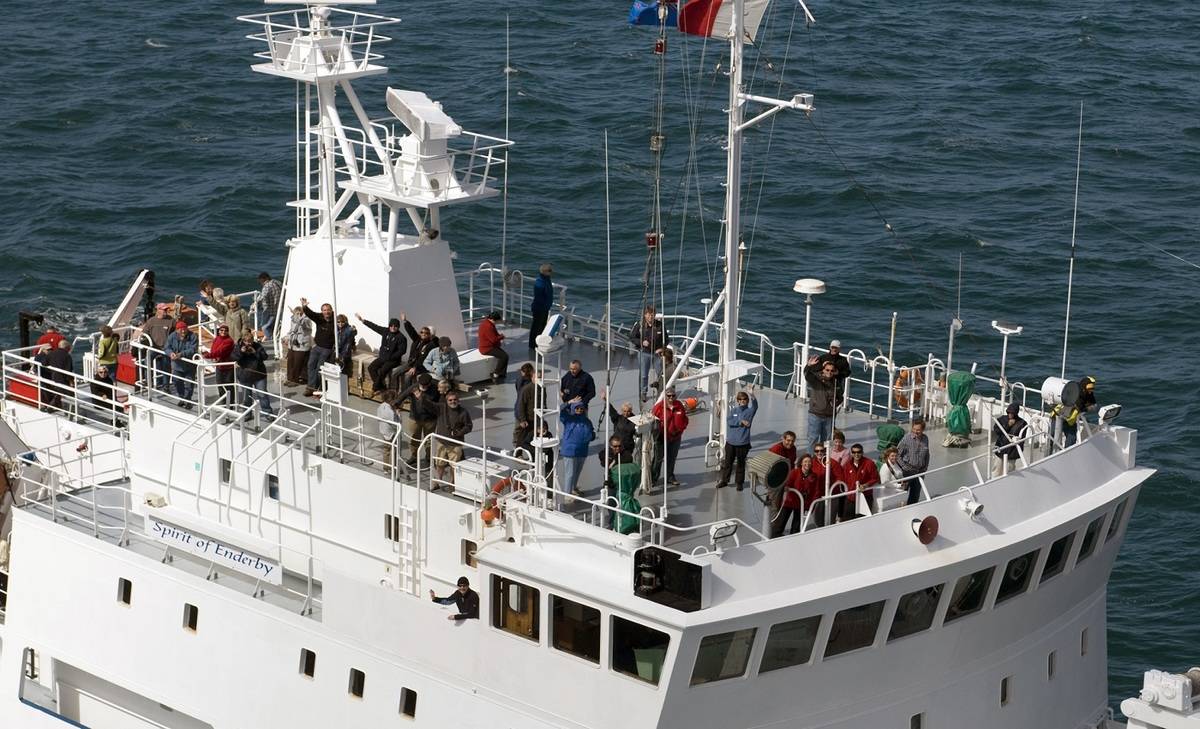 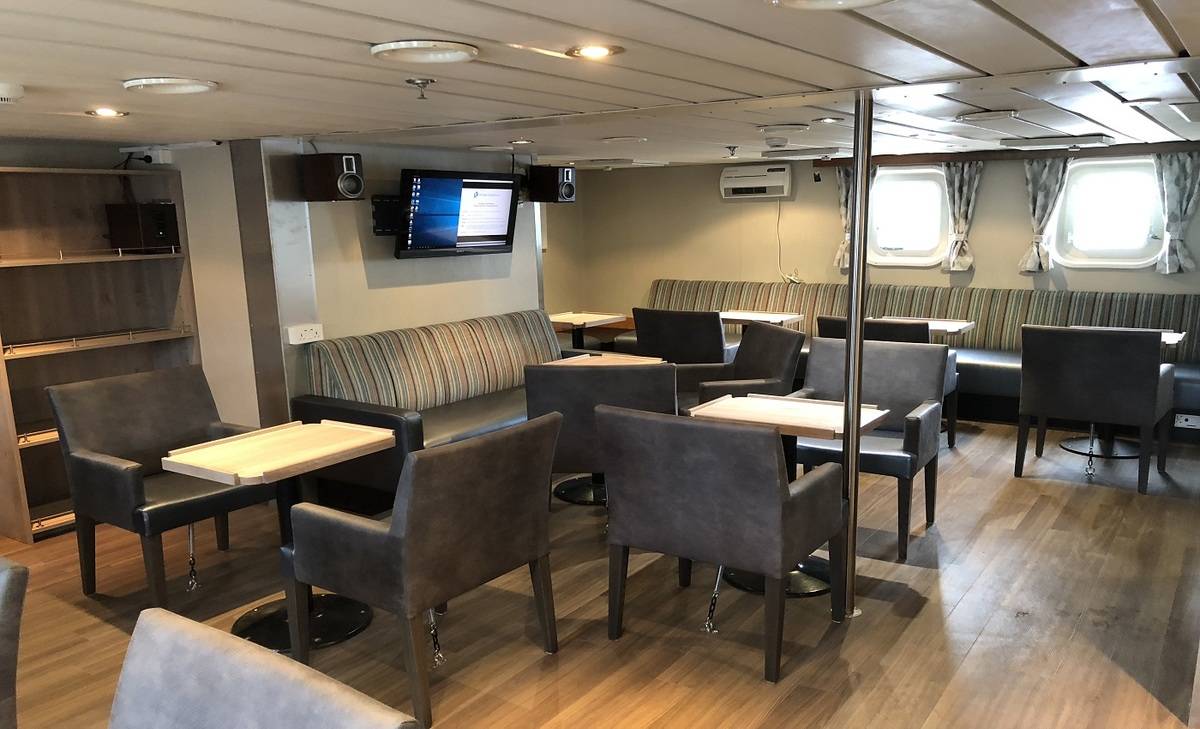 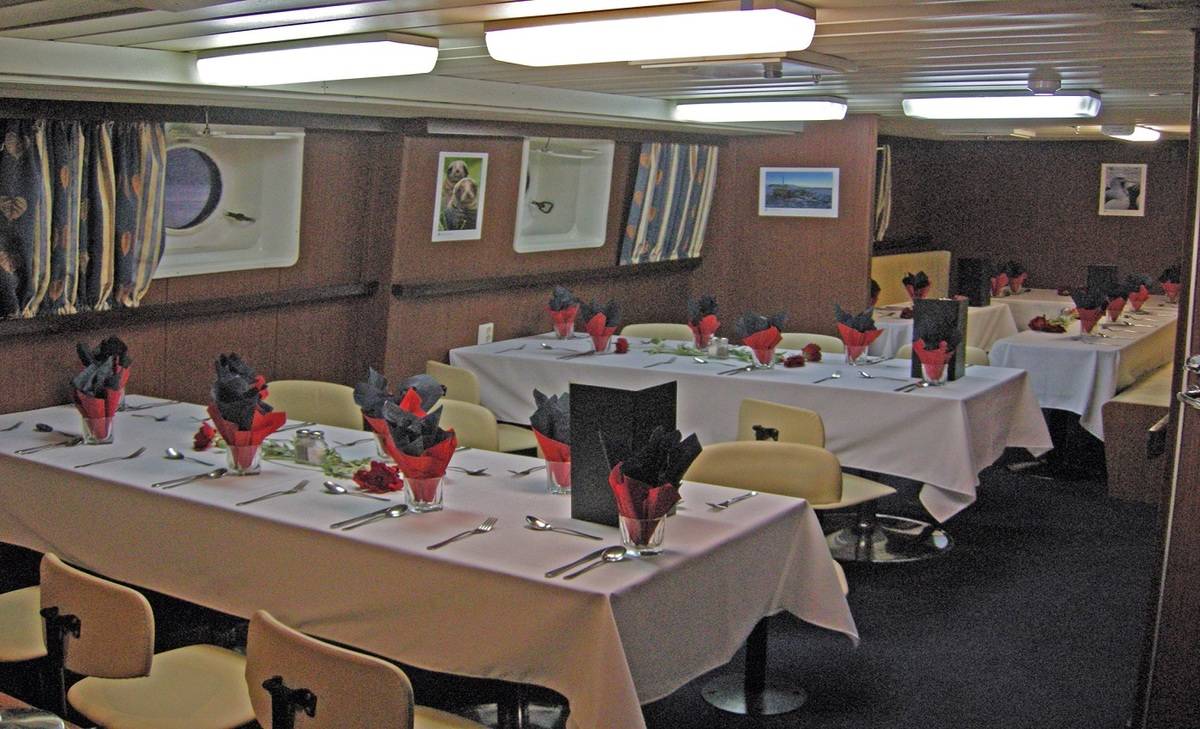 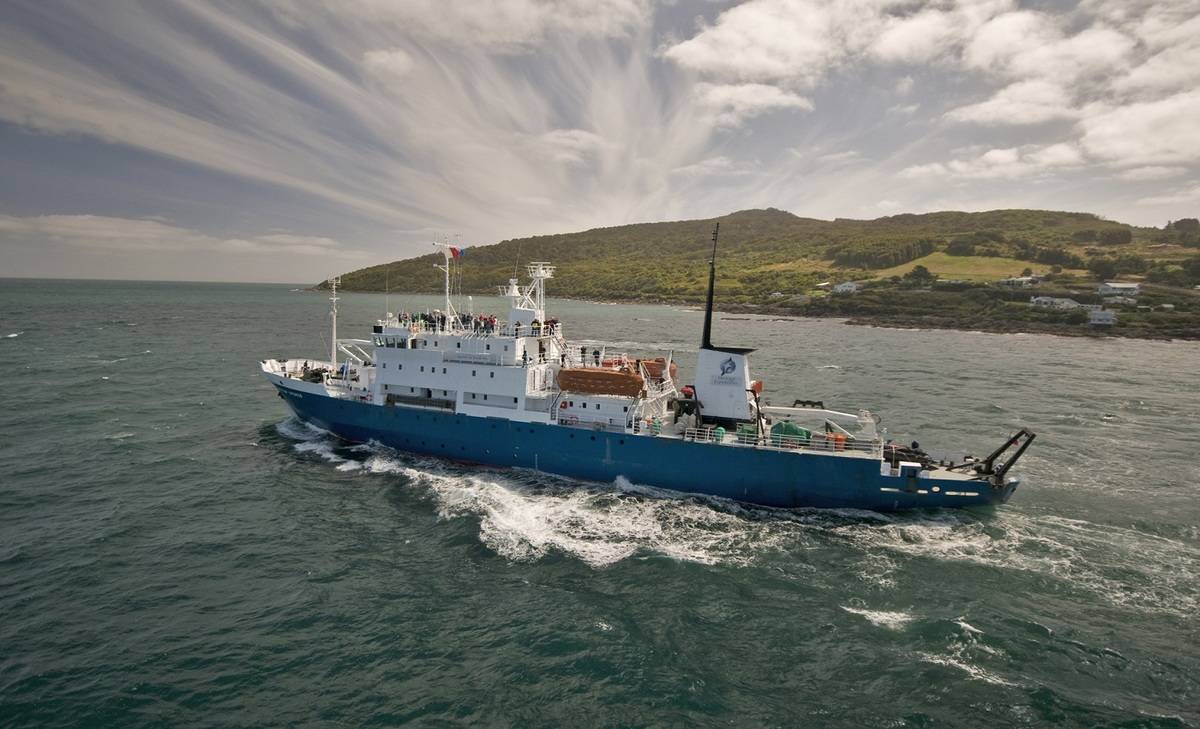 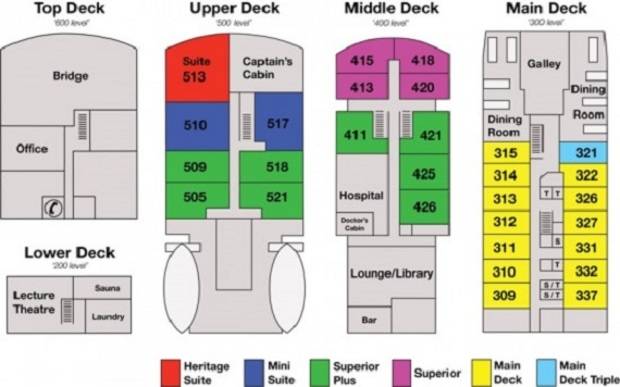 During our voyage, circumstances may make it necessary or desirable to deviate from the proposed itinerary. This can include poor weather and/or opportunities for making unplanned excursions. Your Expedition Leader will keep you fully informed.