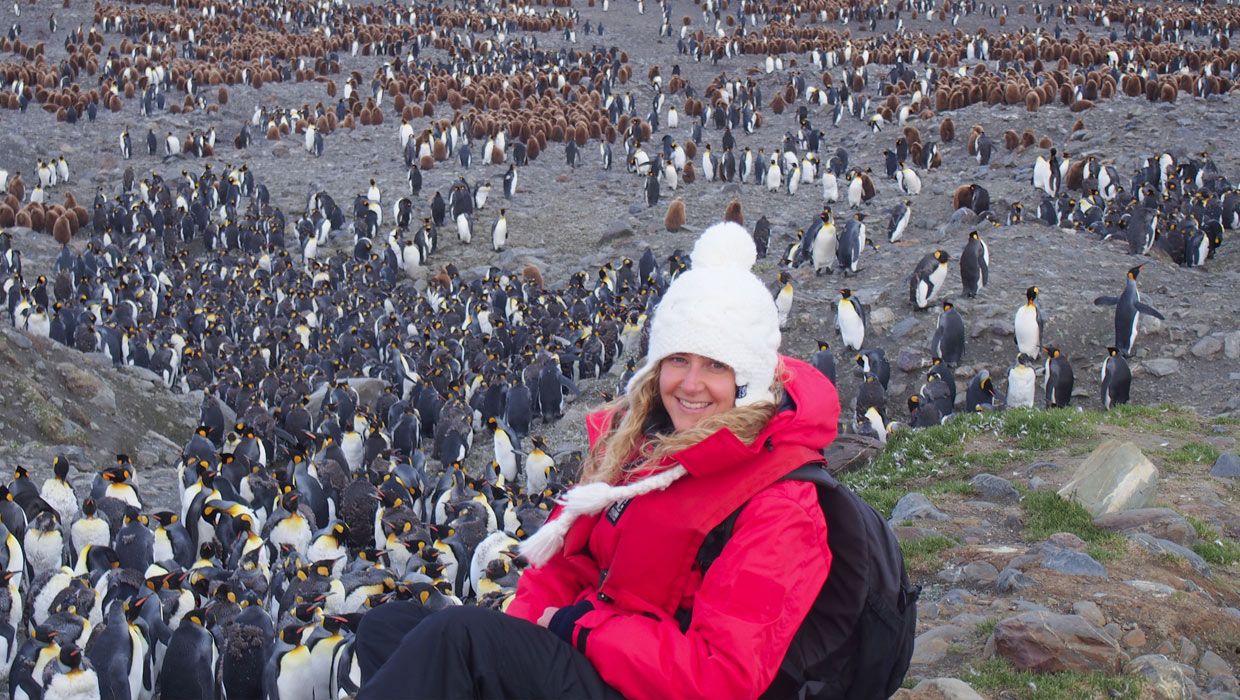 If you have a passion for history, wildlife and remote locations, and or you have already experienced the wonder of the Antarctic continent, then the Falkland Islands & South Georgia should be next on your list!
South Georgia was high on my bucket list as it has world famous wildlife beaches with this thousands of king penguins, elephant seals, bird life and fur seals. Unforgettable wilderness scenery and dramatic South ocean seascapes. It has been described as being "The Alps in the mid-ocean". Over half the island is permanently glaciated, wildlife is abundant, approaches by sea usually straightforward and it is steeped in the history of Antarctic exploration and of Antarctic whalers and sealers. Every day was amazing in South Georgia but I have put down some of the major highlights. 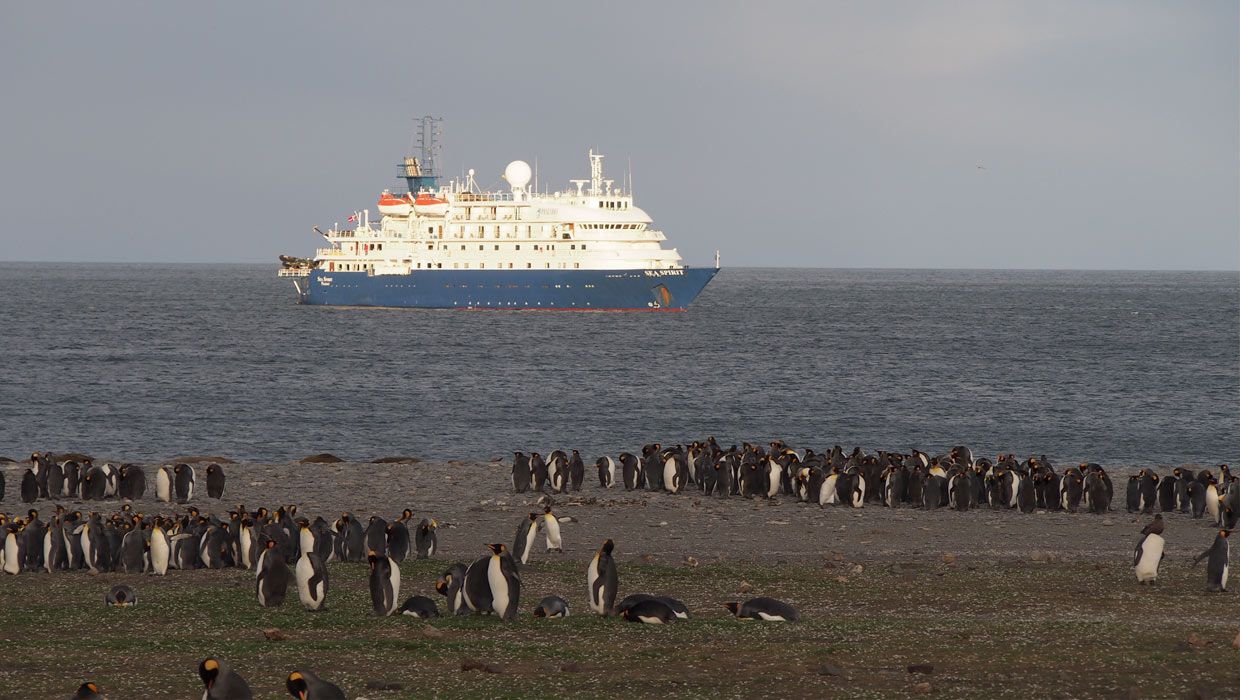 Sea Spirit – Expedition cruising on board Sea spirit combines the comfort of a quality 4-star hotel with the active lifestyle of an adventure holiday. It is one of the more luxury smaller vessel expedition ship that travels to the Polar regions. Very comfortable, spacious rooms and that fits up to 114 people.  Mini bar and walk in cardboard to store your luggage so lots of space. Many common areas to relax, such as the club lounge area which has views of the scenery, the library which is also connected and the presentation room also. Jacuzzi on board that you can use 24 hours – so it’s nice to be able to sit and enjoy the scenery while sitting in a nice warm jacuzzi.

I was in a superior cabin 417, which was extremely comfortable and spacious. It has a desk, big double sofa area and twin beds which can be moved to a double bed if need be. Nice size bathroom, with shower, shampoo and shower gel included, hair dryer etc.  I recommend that you stay on Deck 3 or 4 and request to be midship for the most stability.

One of the benefits I like is it one of the very few ships you can walk 360 Degrees all the way around the deck so if you must move quickly (which you often do with whales). Also, you embark/disembark from a deck/platform at the back of the ship so this is the easiest most stable way to get on /off zodiacs. (most ships have side steps or gangway’s)

On all cruises, an expedition jacket is yours to keep and the loan of rubber boots is included for the duration of your cruise, so you just need to bring your layers, waterproof pants and you’re set. 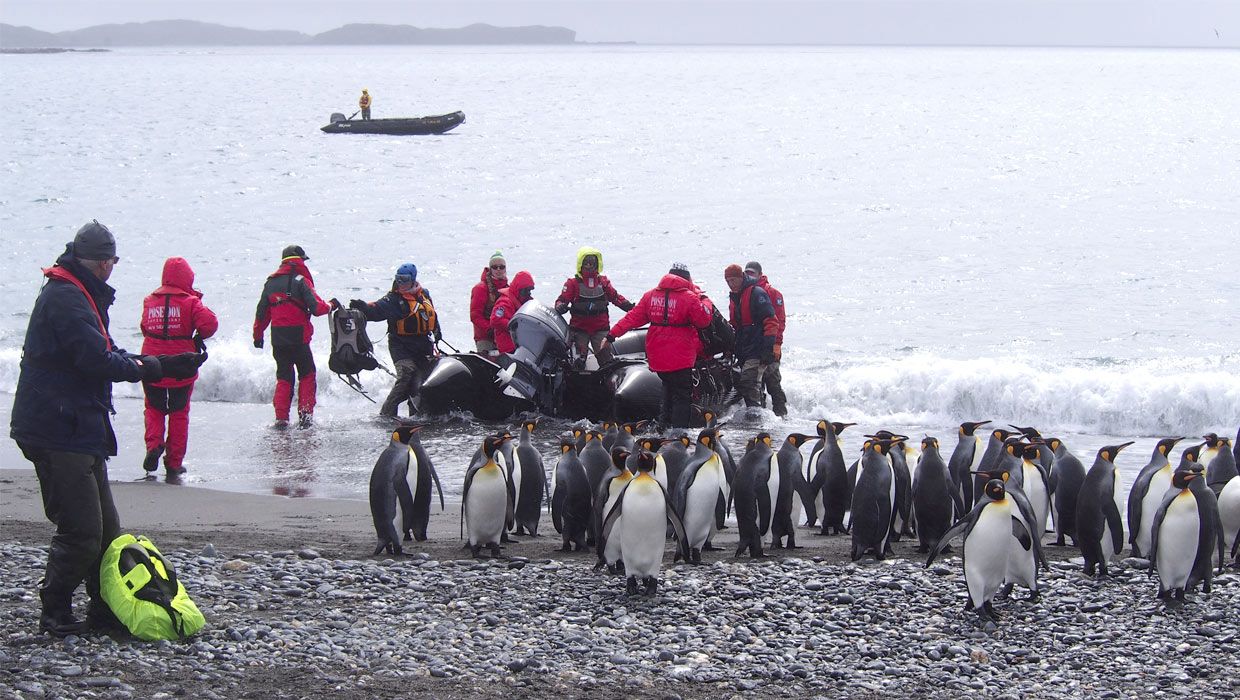 Kayaking – They had kayaking onboard which is an optional extra around US$800 per person that you can kayak as many times as you like, weather permitting.  I had the opportunity to experience this and I highly recommend it if you enjoy keeping active and it gives you a very a different perspective and peaceful experience.

Falkland Islands – Carcass island
This was our first landing on the Falkland Islands. Carcass Island has loads to do. It is a wildlife photographers dream, especially for birds. I got some great wildlife pictures but for me the highlight of the island was the great hiking and awesome views. Went for a 4km walk around the bay to the house on the island. It was windy and cold but the scenery was stunning, with the contrast of colours.

Set Sail – We then set sail for 2 days to South Georgia, we were lucky it was a nice smooth crossing to then arrive in South Georgia for a good 7 days of landings. 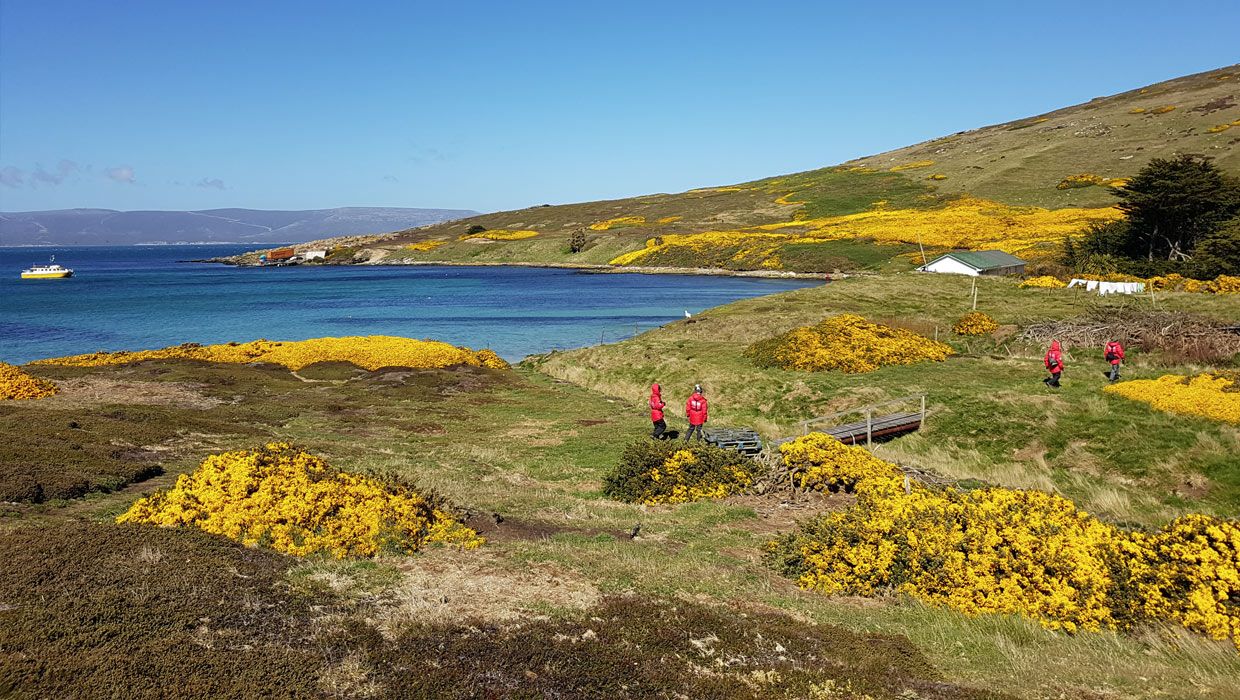 Saint Andrews Bay – NOT TO BE MISSED!
This is the best of the best in terms of King Penguin colonies! This place was incredible, I felt like I was in a David Attenborough documentary. BBC were filming the day I was there for the new Blue Planet 2 which will be out soon. It was such a special place. It is the biggest rookie in South Georgia with over 300,000 breeding pairs. As I was there at the start of the season this meant that there were lots of young chicks and the courtship time between the king penguins. A lot of them were also losing their winter coats, which was funny as it looked like a lot of them had a cape on.

There were so many king penguins, elephant and Fur seals some landings it was pretty much impossible to not encounter one so close to get ashore. King penguins were visible as far as the eye could see, with Elephant seal cows mixed in the crowd, grunting. 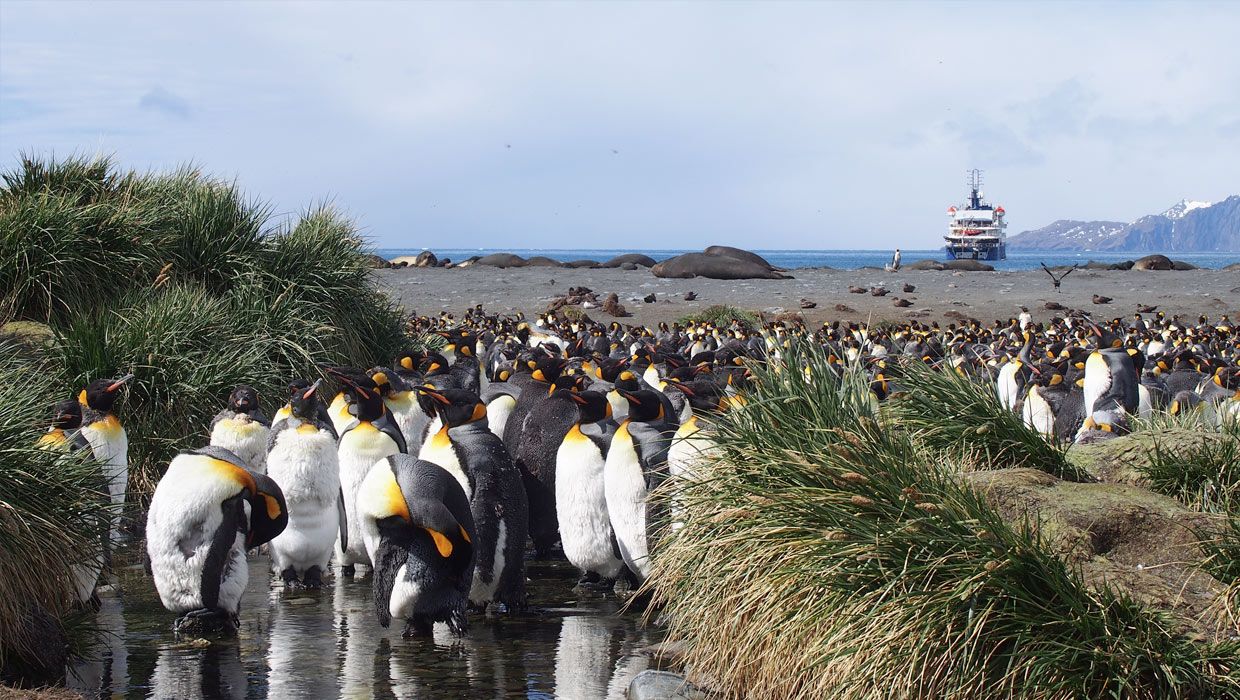 The 3 ton, 15 feet long blubbery ‘beachmaster’ males, fight one another to gain large harems of females.  The competition is brutal as this is their only chance for next generation.

My favourite moment on the trip was just sitting and taking it all in and then 4 King penguins came right up to and starting pecking at my feet, they were so curious, I was a bit nervous at first as when you are sitting down on the ground they are at eye level with you, some even taller, so they can be bigger than you think. I just froze and they just came up slowly and walked around me, I got some great photos and videos, it was an amazing experience for them to be so close to me and one I will never forget! 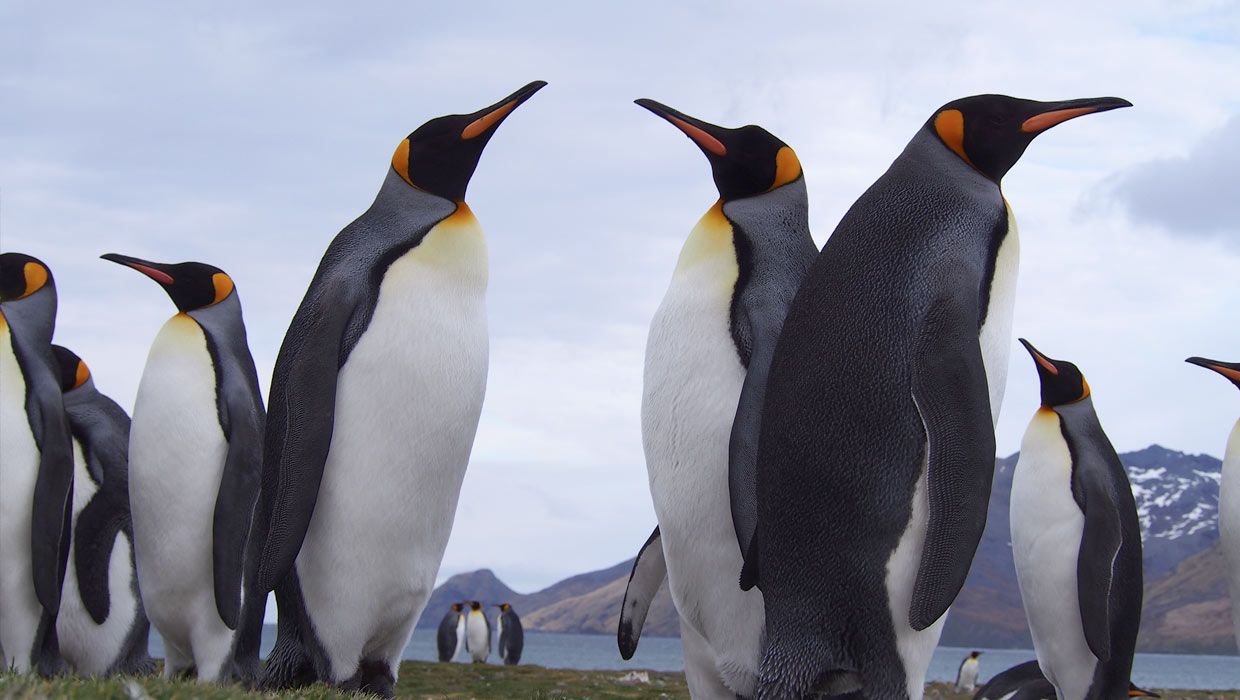 Grytviken
We spend a one full day here which is the main and biggest old whaling stations and now also a scientific research base. This has a great museum and also grave of the famous polar Explorer sir Ernest Shackleton. It was interesting but also very sad walking through the whole whaling station and how life was back then. 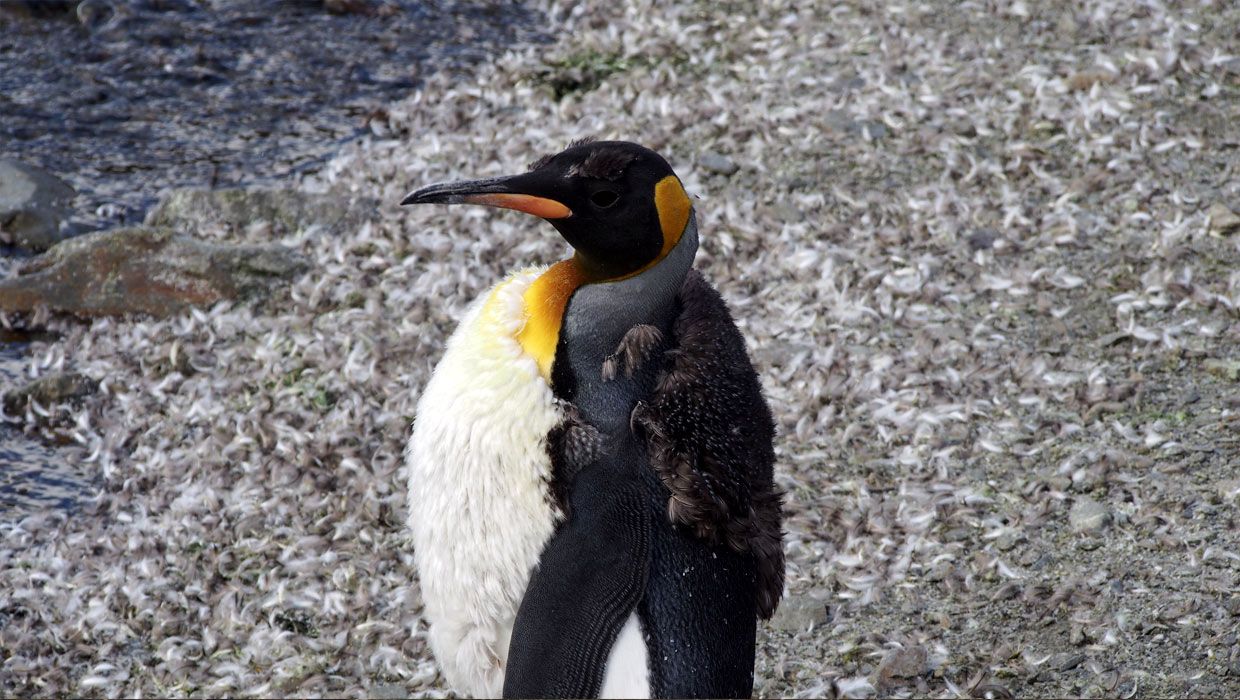 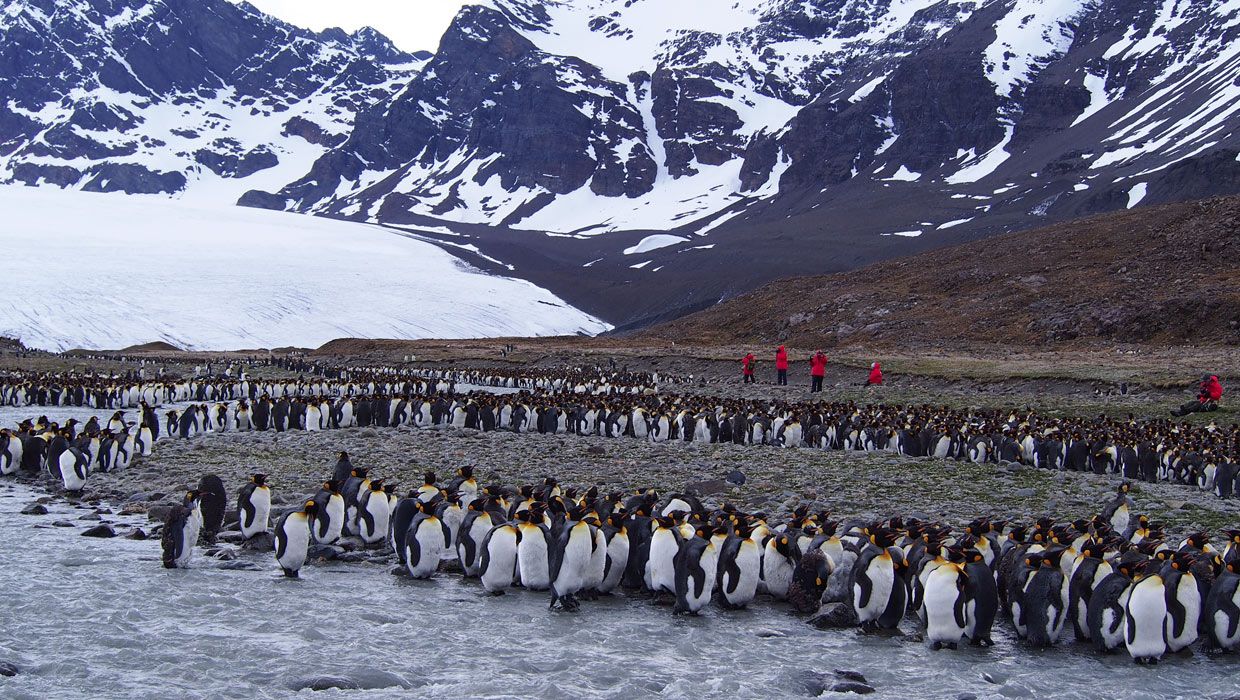 Cooper Bay – This bay also has a rookery of macaroni penguins, we couldn’t stay here long as they are very protected. The Macaroni Penguins appearance is very different from most penguins. They have yellow, black, and orange hair joining on the top of its head. The hairs on its head are also called plumes. Their feet are pink, their bill is orange, and their eyes are red. They are so cute to watch as they are hoppers more than waddlers like other penguins.

Drygalski Fjord – One of the final landings we did was exploring Drygalski Fjord, which is on the southern eastern part of the island, this place is like no other place in South Georgia that we landed on, where the glaciers came tumbling out of the mountains into the ocean. At the end of the Fjord is marked by a massive blue white mass of ice. 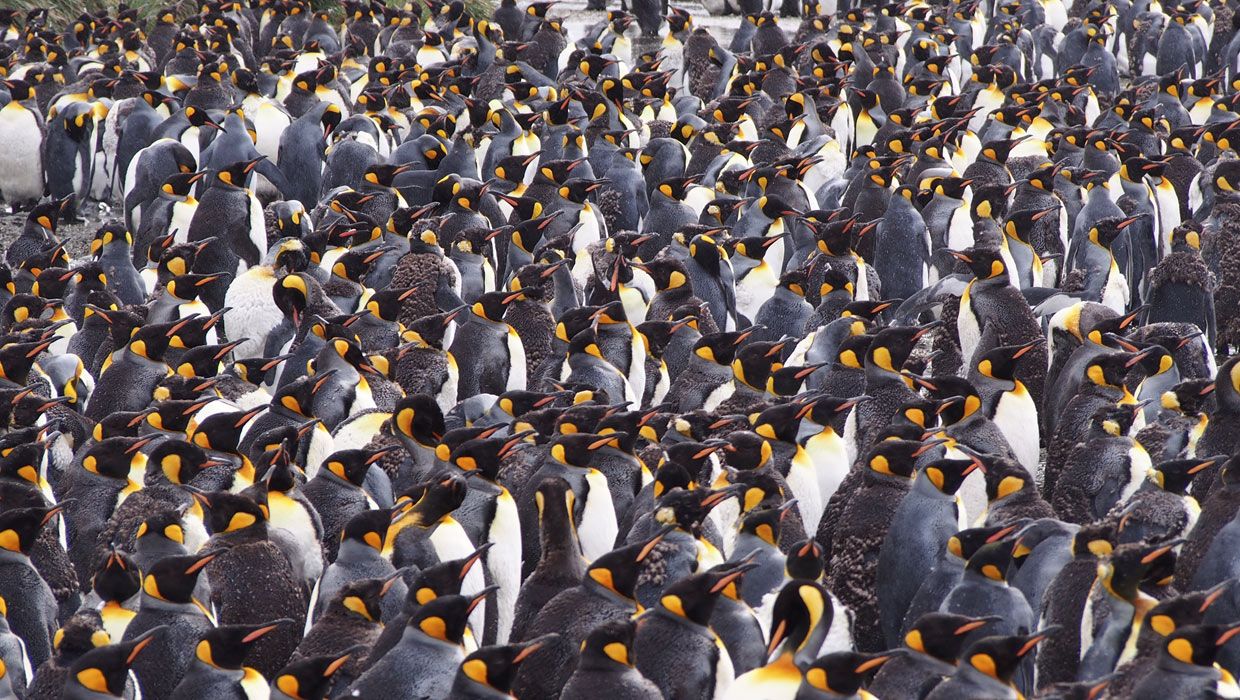 Falkland islands – Stanley
After another 2 days in open sea back to the Falklands, we arrived at the small capital of the Falkland Islands, Stanley. Sleepy town, they had an interesting museum which is worth visiting about the old and new Falklands, a few British pubs. Colourful buildings as we came in and very British. There are no ATMs on Falkland’s, so if it’s the weekend, the bank is not open, so always best to bring USD or pounds, please note though, Falkland’s have their own pounds, so if they give you the Falkland pounds back you cannot use it anywhere else except for there, so make sure you don’t exchange or take out too much of the local pounds, shops except the dollar and euros though also. We took a short bus trip out to Gypsy cove which is a white sandy beach for some more wildlife spotting, great for lovers of birds! Falklands is very windy, so it was chilly. It’s a great place if you wish to spend more time and see lots of the bays, to hire a 4WD or a driver to take you around the area for 3 or 4-night trip, as there is so much more to see than Stanley. 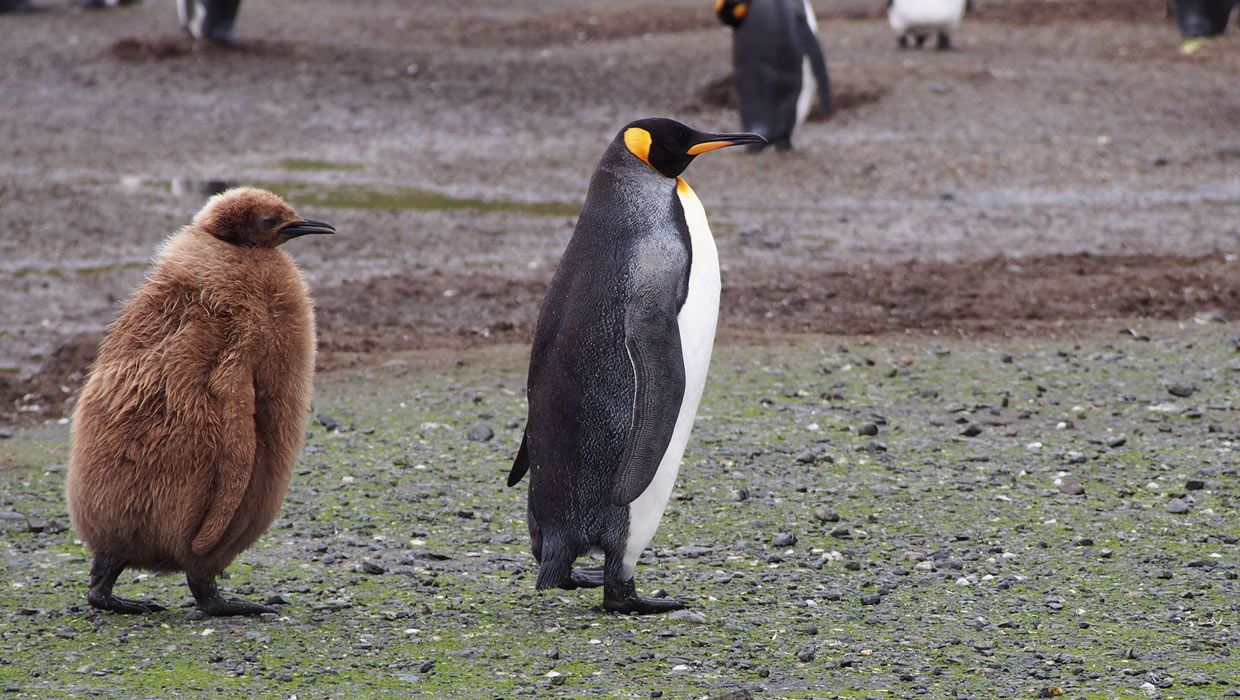 END NOTE
We were so fortunate with the weather, with blue skies most days and we were very lucky completing 13 landings in 7 days South Gregoria which was an extremely successful trip for any polar cruising in South Georgia.  South Georgia can be a quiet challenging destination due to exposure to the heavy weather systems, which was one of the main reasons I wanted to spend the maximum number of days I could there and make sure I could land on all the best locations!  I was expecting more ice as we are one of the first ships in the season but it just shows how the climate is fast changing and it shows more than ever in these regions first before noticing in the rest of the world.

This trip included 7 full days in South Georgia which I high recommend if you wish to see all the major sites, as it’s one of the most remote places in the world, only accessible by sea for at least 2.5 days each way from the Falklands and from Antarctica if you have the longer trips. As it is very unpredictable with the wind in South Georgia, on a normal voyage that includes Antarctica, you may only have 3 landings, so if the weather is bad and you cannot land, that means less days to have the chance to land. 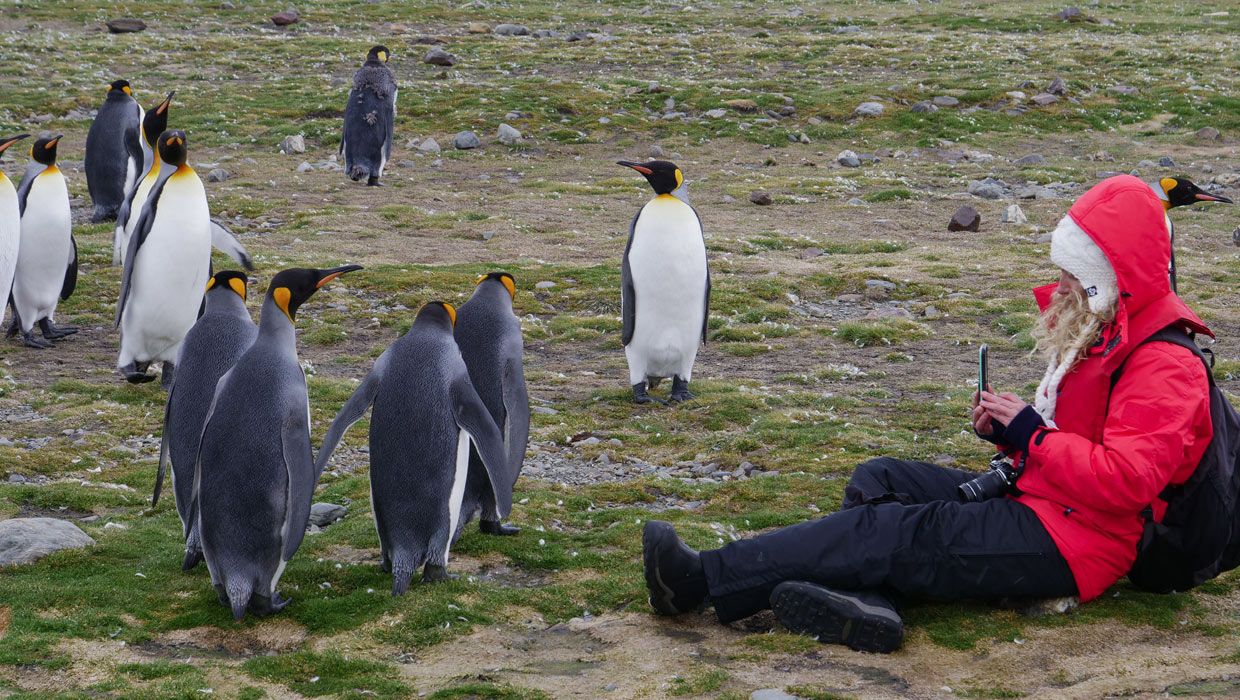 If budget and time allows it and you would also like to visit Antarctica, I recommend two separate trips to make the most of your trip. So, a classic Antarctica trip for example and then a separate Falkland and South Georgia trip and then you have the highest chance of seeing the most out of both places.  I understand it is costly adding South Georgia in the mix but if you are interested in Antarctica already and this could be your only chance to see this part of the world, why not take up as many challenges as possible?

Add it to your bucket list you will not regret it!!  An up-close wildlife experience not to be missed!