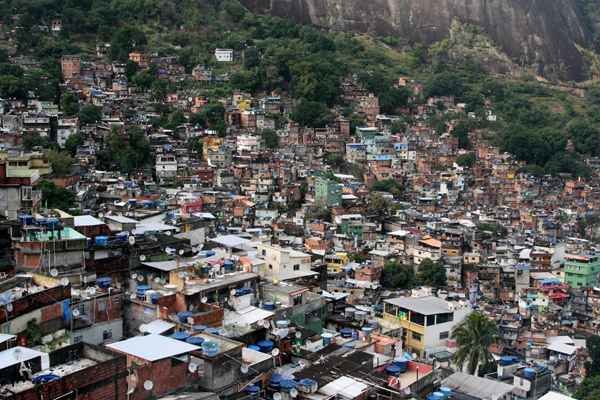 Rio de Janeiro is world renowned for it’s beautiful beaches and stunning landscapes, but you only need to look to the hills for a reminder of another, lesser known side to Rio. Brazil’s slum areas, know as favelas, are a colourful but grim reminder of the poverty and violence that have famously plagued the city’s past. Often criminal organisations have controlled and large parts of the communities, with widespread corruption not helping matters. Things are however improving, with a concerted effort by the government make the favelas safer for its residents.

My knowledge of favelas was limited to having watched the iconic movie City of God several times, so it is fair to say I was reasonably anxious as to what I was going to experience. This perception is exactly what our tour guide, Alfredo, explains he wants to dispel on our favela tour. Alfredo picks us up and as we drive up into the hills he retells the history of the favelas, the tradtional lack of infrastructure and services, and the intriguing 5 year squatter’s-rights surrounding possession entitlement. He also educates us on the general operation of these communities, from tax evasion and power leeching, through to self-organised rubbish collection and mail delivery systems.

Rocinha is the largest favela in Brazil and a recent census put the population at 70,000 inhabitants, although people speculate it is actually much more. Alfredo takes us to a local patio where we are able to take in the stunning view that this favela has overlooking Rio. “IT is not often you can find the poor, with the good view, looking out over the rich” he rightly points out. We depart down the hill  through the “Estrada da Gávea”, which quite astonishingly is a former F1 race track. The part of the route we drive over is very bendy and made of old cobbled stones, and looks highly dangerous – so much so that it was nicknamed “Trampolim do Diabo”, or Devil’s Springboard.

In contrast to Rocincha, Vila Canoas is a much smaller fevela which has never been run by gangs. We visit a school named Para Ti. This school was founded by an Italian family, and is also funded partially by the openers of the tour we are on, as well as other donations and gifts. The school was small but bright and colourful, with a modest computer room which is apparently the favourite of the children.

Walking through some of the back alleys of Vila Canoas I was quickly disorientated. The rabbit warren of alleys and doorways is both confusing and daunting. Glimpsing through open doors and widows into peoples homes I see kitchens and living rooms, all small but clean. We walk past some housing that has been built on top of a running river. In stairways and courtyards Brazil flags are hung or colourful murals brighten the surroundings. Alfredo is not worried about our safety. In fact his biggest concern seems to be making sure we don’t step in any dog poo, of which there is a fair amount.

A fevela tour is a fantastic way to experience a broader aspect of Brazilian history and culture beyond the beaches and bars. I felt very safe on the tour, and while I am under no illusions that we most likely saw a sanitised outer-layer of the fevelas, it still gave me an insight into the difficult conditions these people deal with and how they seem to have managed to make it work for them. I really enjoyed the experience and it made me very thankful for all I have.