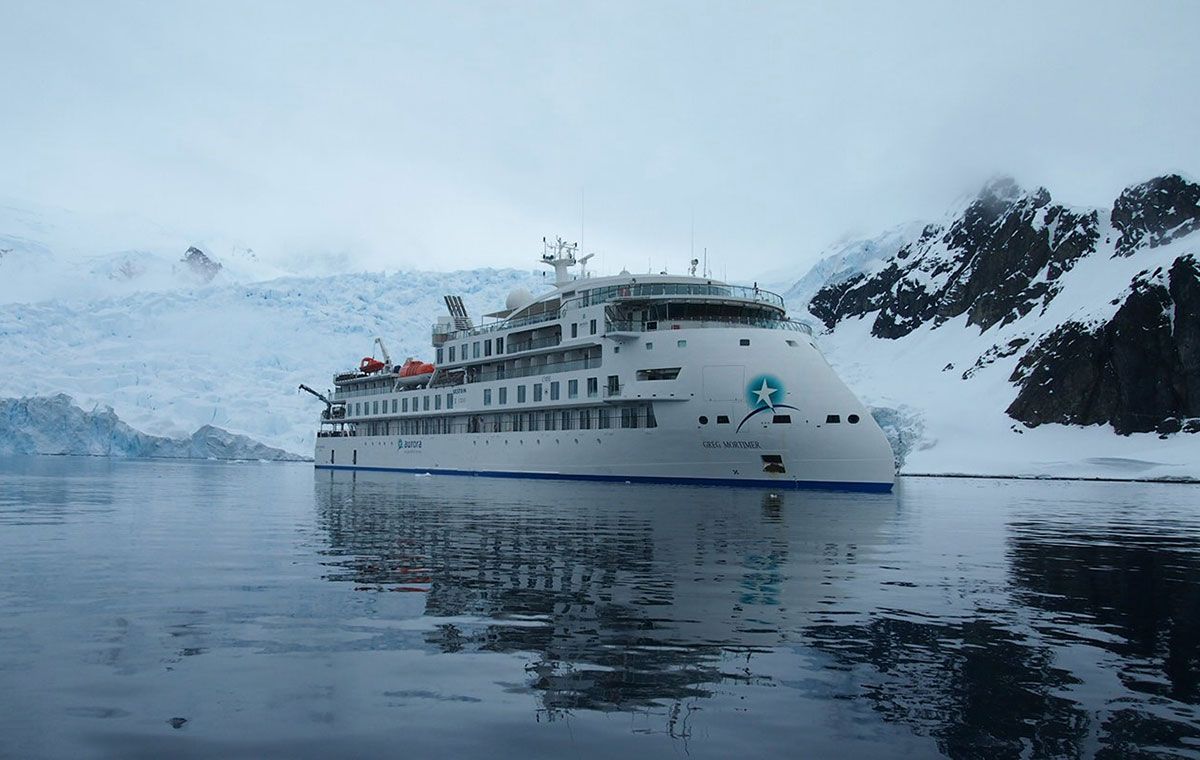 There has been quite a lot of hype around Aurora Expeditions’ brand-new ship, the Greg Mortimer. With its X-Bow design that is currently unique to the expedition cruise industry, it is one of a number of new ships that are taking this industry into a new era of custom built vessels and moving away from the previous generation of converted scientific research vessels that have been taking adventurous travellers to the polar regions over the past few decades. I was lucky enough to be on the Greg’s third voyage to the Antarctic Peninsula on the 19th of November.

The morning after I arrived in Ushuaia, the ship was in dock after returning from its previous voyage in the early hours. After breakfast I wandered down to the waterfront to get a closer look, the ship definitely makes a very good first impression with its sleek lines. We boarded the ship shortly before 5pm and the interior was just as impressive. While I don’t believe Aurora consider themselves to be a luxury cruise operator as such, this vessel is without doubt quite luxurious. The interior design is very tasteful with its soft colour scheme and the entire ship is decorated with wonderful photography of polar wildlife and landscapes.

We were all soon shown to our cabins. I was in an Aurora Stateroom on deck 3, the bed was really comfortable, the bathroom more than adequate and even a bit roomier than I’d expected and the facilities in general well and truly exceeded my expectations. I would definitely recommend a balcony cabin as having direct access to the outdoors would be great, the junior and captain suites were beautiful if you really want to spoil yourself. 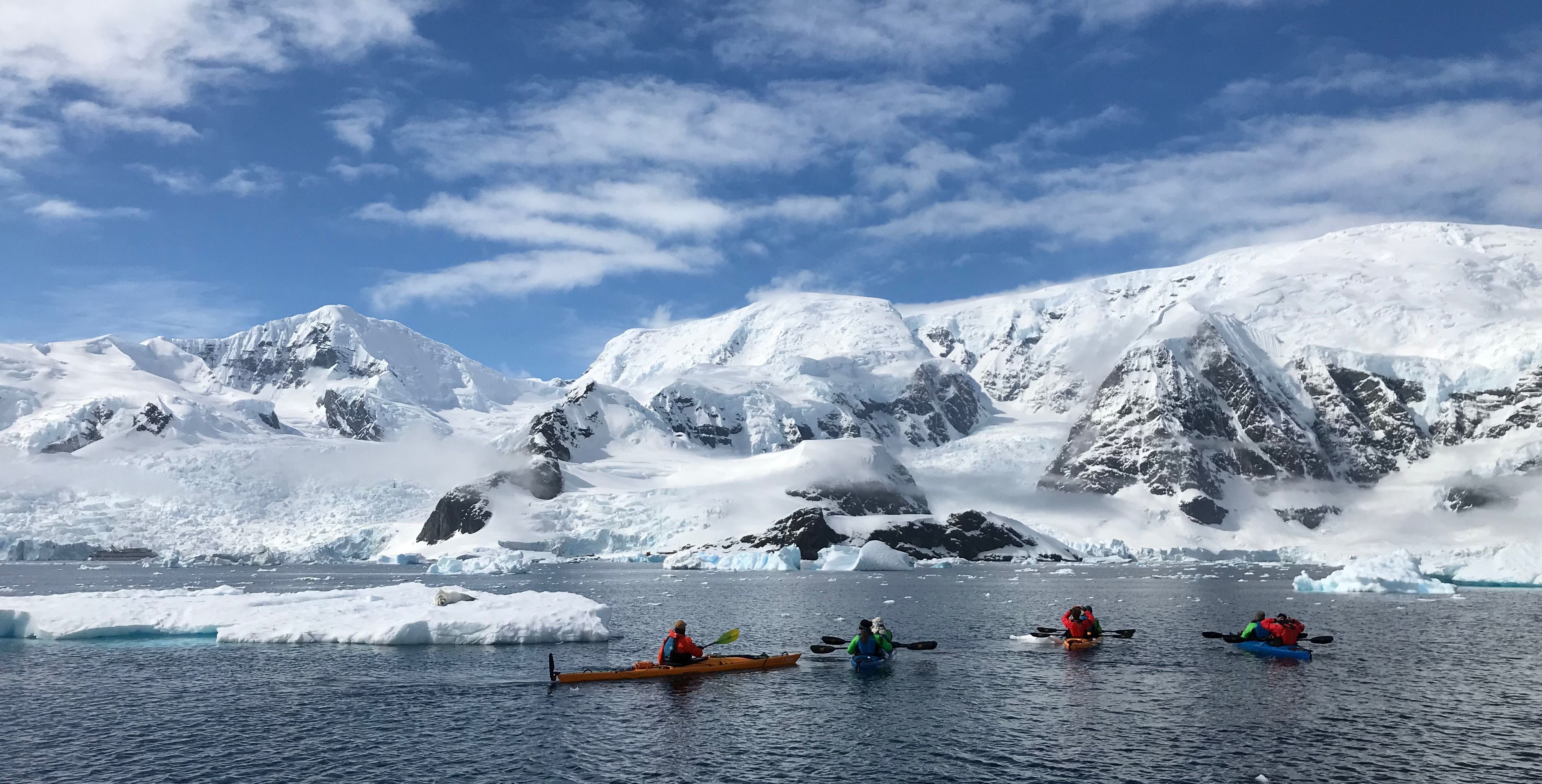 Having seen a number of other vessels that take a similar number of passengers while on the expedition, in comparison the Greg seems quite large. This may be to do with the amount of common areas there are on the ship. There is quite a bit of space on deck 5 around the Elephant Island bar, an area I became well acquainted with. The lecture theatre that is next to the bar is well laid out and it is easy to see the presenter and screens from anywhere in the room. On deck 7 there is a library, a small gym and a steam room as well as a large amount of outdoor deck space, this area was great for the barbeque dinner we had on our last night before leaving Antarctica. On deck 8 you have the observation lounge and another quite large outdoor viewing deck that looks out over the bow. This was a great area and I spent a lot of time out on the deck taking in the amazing scenery over the course of the journey, or in the observation lounge when conditions weren’t so good. 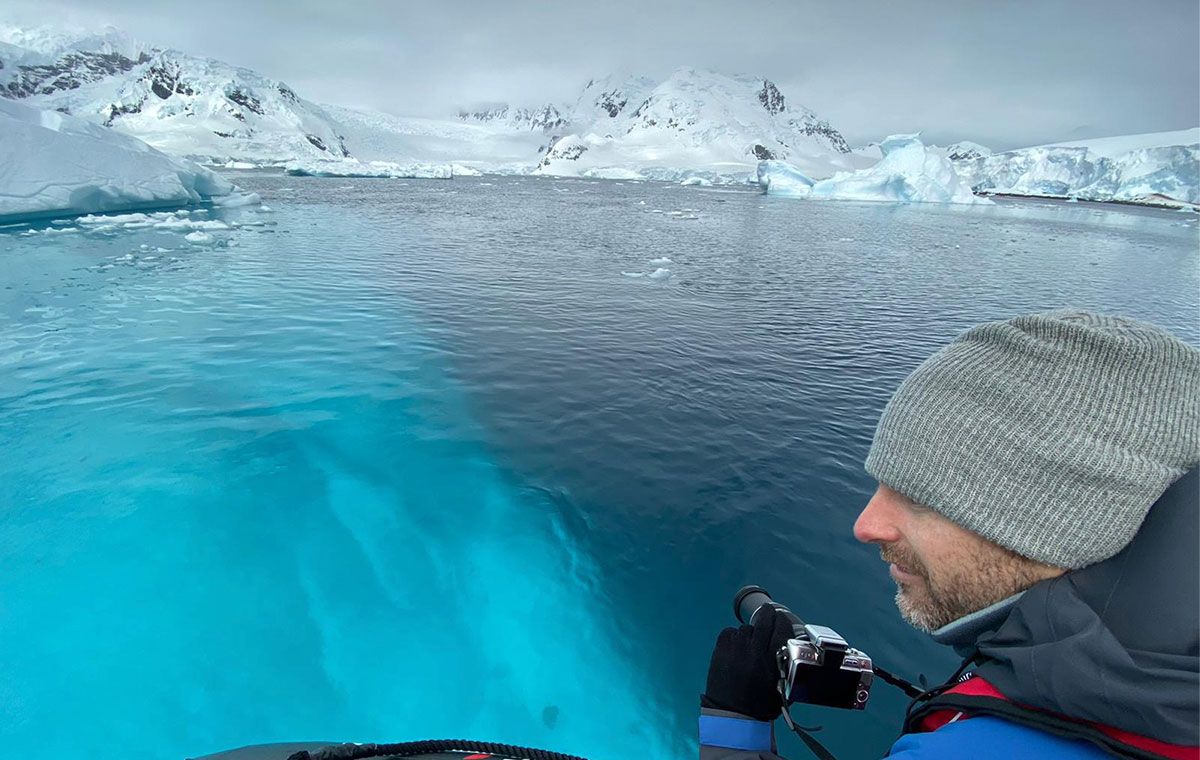 Another great space on this ship was the mud room. I’d heard it can be challenging on some vessels coming in and out of zodiacs and kayaks, especially if there is a bit of surface chop on the water. With the staff assisting, everyone on the ship was able to get into the zodiacs without any issues, even when the sea wasn’t completely calm. There is the option to load and unload zodiacs from either side of the ship or from the back, depending on conditions. The pontoon that was attached to the stern looked like it made the kayakers’ lives easier when it came to getting in and out of their kayaks, it was also a perfect platform for the polar plunge. The mud room provides a place for everyone to leave their boots that they wear on excursions, as well as any other gear they may want to store there. It saves everyone from walking through the ship and back to their cabins with wet boots after excursions which is a big plus. 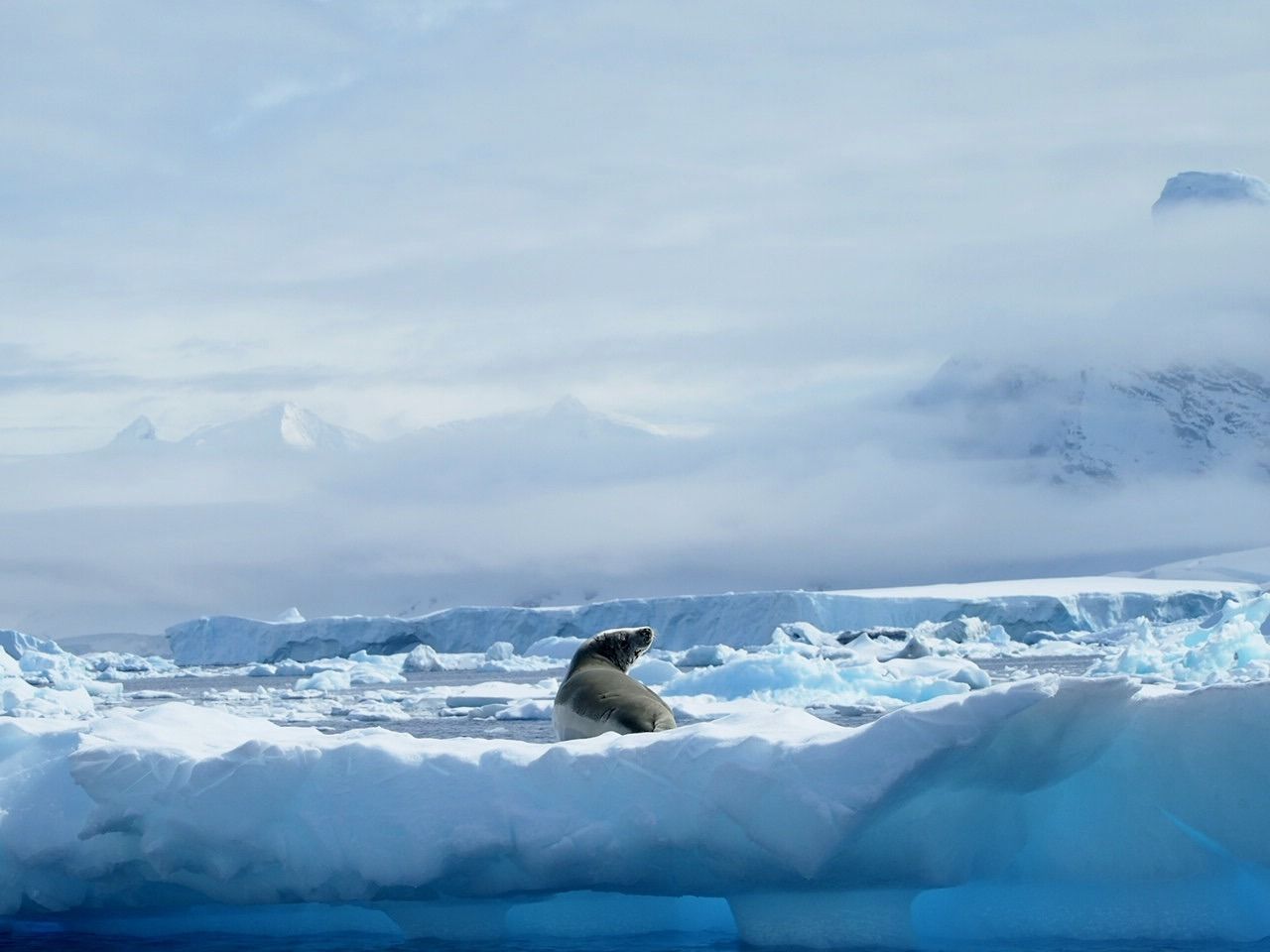 The big question about the Greg Mortimer and its unique X-Bow design is how much difference does it actually make to how smooth the ship travels? Now let me say that we didn’t have particularly rough seas on our voyage, and I am certainly no expert on nautical engineering. The idea is that the X-Bow cuts through the waves rather than going over them. By looking at how much some of the traditionally designed ships we passed on the Drake Passage were moving around heading into the swell, the bow going up and down a considerable amount in only quite small seas, it seems obvious that this design minimises that movement when sailing directly into the swell.

Does the ship still move around in open seas? Of course! Does it stop people getting seasick? Far from it! It does however seem to make a difference in how smooth and how quick the ride is, we left Ushuaia around 6pm Wednesday evening and were on land in the South Shetland Islands straight after lunch on Friday; I believe that is a relatively quick crossing. This may well be something that remains up for debate, but from speaking to staff and crew on the ship that have spent far longer at sea than I have, they seemed to think that it does make a difference and not only that, the bow definitely looks really cool. 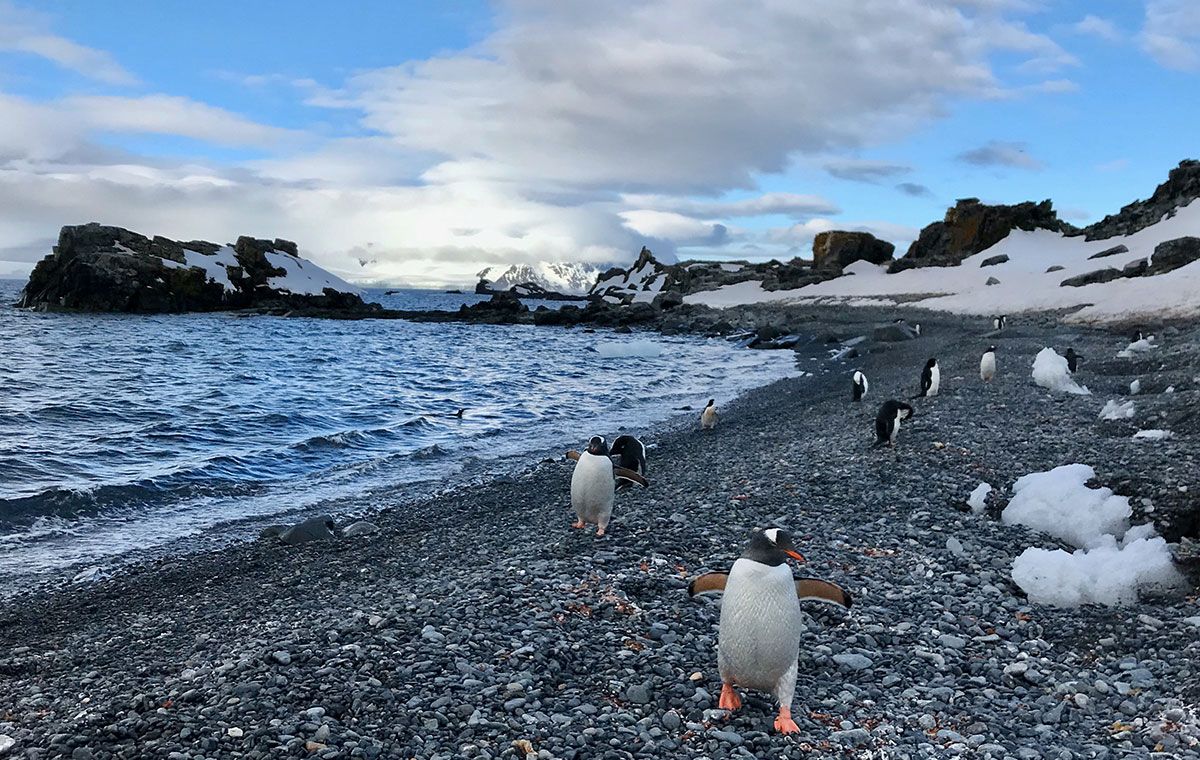 As great as the ship is, a polar expedition is all about the journey and the destination. The places we visited far exceeded my expectations, each landing was unique and offered something new. I knew I’d find the Antarctic Peninsula to be an interesting and exciting destination, but I hadn’t realised just how huge the mountains in Antarctica were going to be, how amazing it is cruising between icebergs in a zodiac in waters with a mirror-like surface, getting up close to whales in a boat half their size, standing in amongst a penguin colony as they go about their funny little lives, seeing elephant and leopard seals in the flesh or being absolutely blown away by the huge rivers of ice that are absolutely everywhere on the Peninsula. These are some of the things about Antarctica that you just can’t really appreciate until you’ve seen it with your own eyes, no matter how many photos or David Attenborough documentaries you’ve seen. 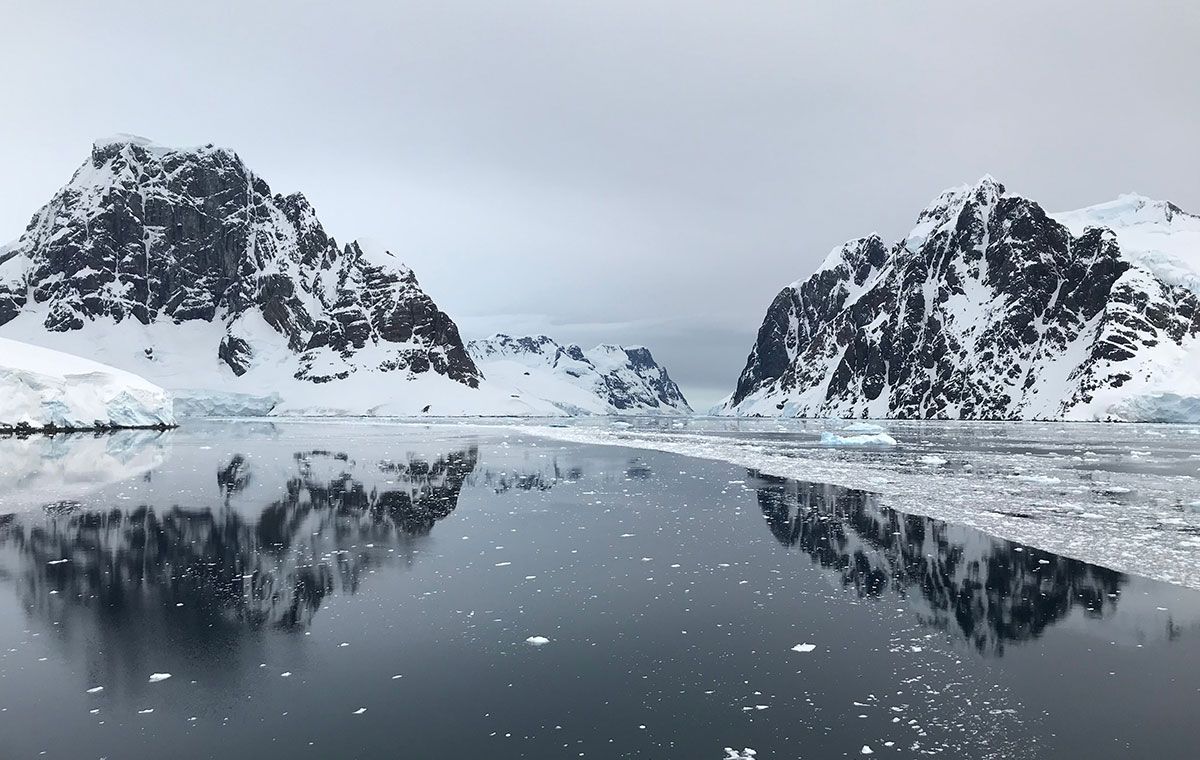 For me the highlights of the trip were finally getting on shore for the first time at Half Moon Island after the long journey we’d made to get there, walking amongst a colony of elephant seals on Livingstone Island, zodiac cruising among the icebergs in the Melchior Islands and Wilhelmina Bay, watching the sun slowly come out and light up the landscape of the absolutely incredible Paradise Harbour and seeing Orcas in the stunning Lemaire Channel. Also, the spectacular sunset as we were leaving Antarctica and about to head back out into open waters on the journey back to Ushuaia was a sensational send off. There were more, but those moments really stood out. 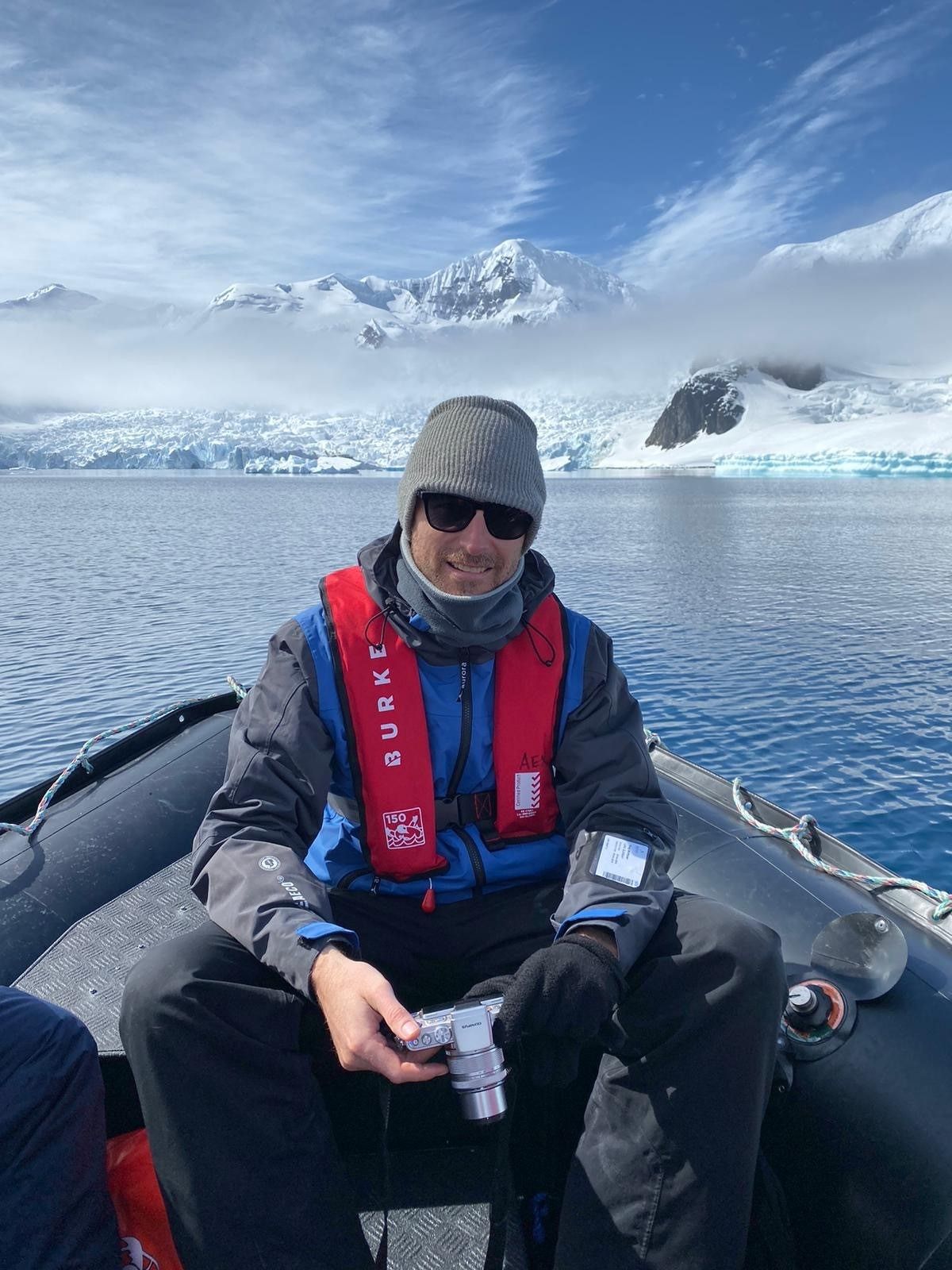 I’d also like to acknowledge the staff on board the Greg Mortimer, they really made the trip what it was, from the crew in the dining room to all the expedition staff, everyone was so friendly, welcoming and full of knowledge. Travelling on the Greg was a truly unforgettable experience and a fantastic way to reach my 7th continent!

You can see more information on the Greg Mortimer, or see our Antarctica expedition page for all of our small ship voyages.