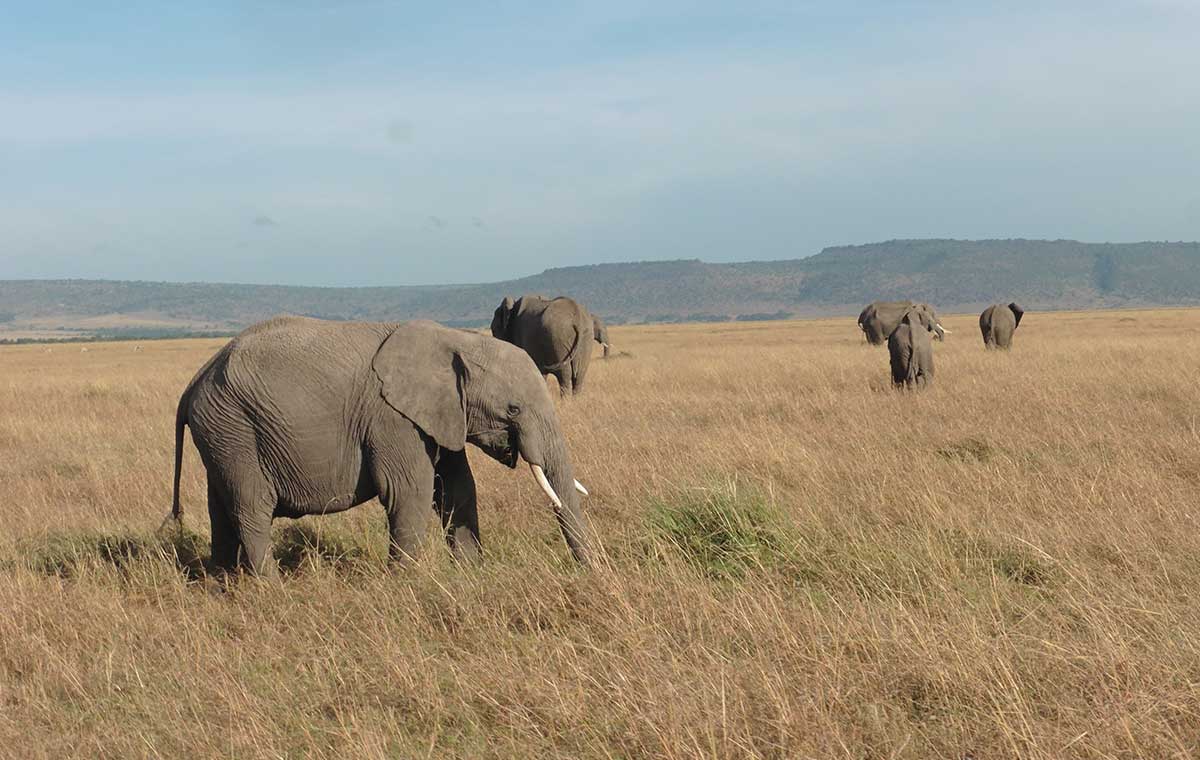 I’ve spent a lot of time in South America and Asia but hadn’t visited Africa beyond Egypt and Morocco – it’s been on the list for a long time. Last October I attended a travel expo in Nairobi, Kenya and was lucky enough to add a few extra days to visit the Masai Mara.

We departed Nairobi Wilson airport on a small plane bound for Mara North airstrip and Karen Blixen Camp. Coming into land I spotted giraffes from my window – my first of countless sightings. Climbing out of the plane onto the dusty red runway, it already felt like an adventure. There was nothing around except an open sided jeep with big comfy chairs and Jackson, our Masai guide, waiting to take us to our camp.

One of the biggest surprises for me was the concentration of animals in the Masai Mara. I think I was expecting it to be more like the Australian bush, where spotting wild animals requires a keen eye and patience. This was not the case in Kenya. Within minutes we were surrounded by literally thousands of wildebeest, zebra, waterbuck, Thompson gazelles, and many more creatures that I had never heard of before – it was remarkable. They weren’t bothered by our presence, it was more like driving through a paddock of cows. 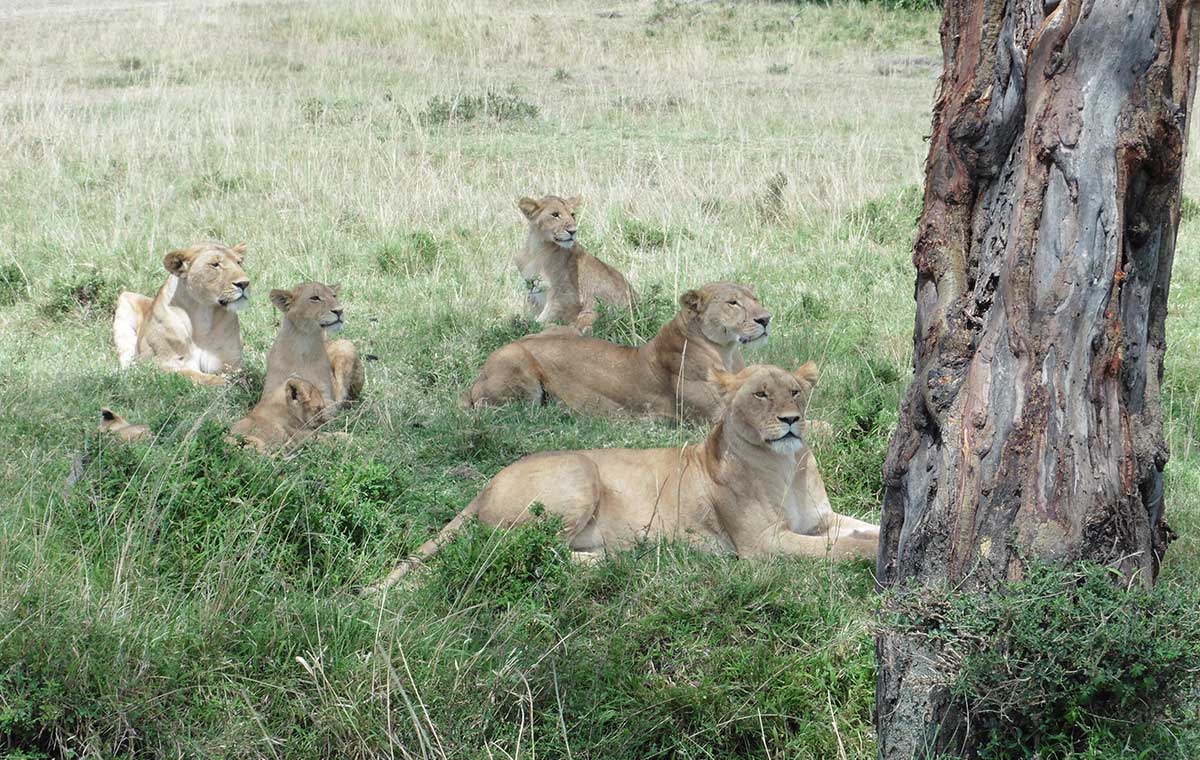 On my trip documents this part was listed as a ‘transfer to camp’ but I quickly learned that on safari, nothing is as it seems. Jackson suddenly veered off the dirt track and headed towards some trees in the distance. There, laying in the hot afternoon sun, was a pride of lions complete with about 8 cubs! We edged closer, being careful not to disturb them, and watched the cubs play, the mothers swatting them away when they became annoying. It was amazing how close we got to them, and how little they noticed us.

Our eagle-eyed guide was busy scanning for more animals and pointed out a chunky little warthog cheerfully trotting about on a nearby hill. Of course, we called him Pumba. We weren’t the only ones to notice him. Two lionesses were carefully stalking from either side, creeping on their haunches towards him. We watched them coordinate their attack, with a mixture of horror and anticipation, for 30 minutes until they made their move but Pumba was lucky that day. 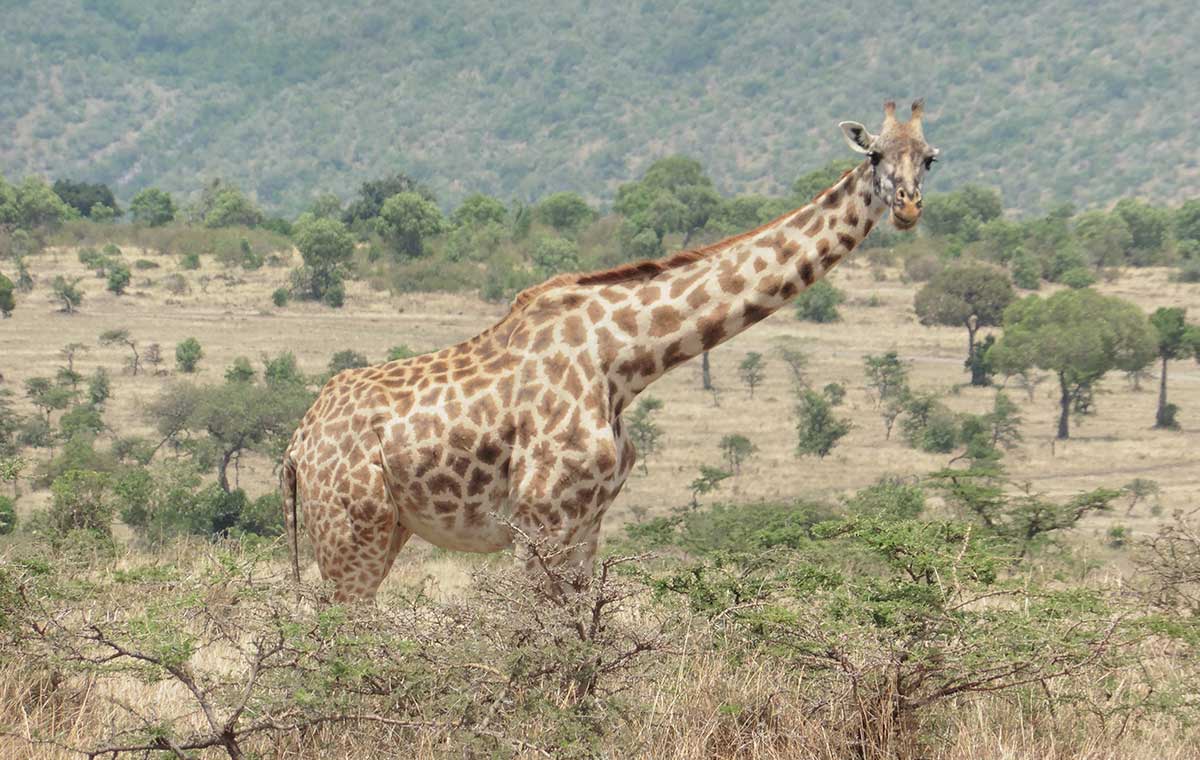 We continued to camp but not before coming across giraffes and elephants ambling through the undergrowth. Arriving at camp I was already overwhelmed by how much we had seen in just two hours.

Karen Blixen Camp, in the Mara North Conservancy, sits on a bend in the famous Mara River. The bend is also home to about 40 or so hippos that laze in the riverbed outside the huge thatched dome of the dining area. We were escorted to our tent, set up on a raised platform beside the river. Our ‘tent’ complete with verandah, twin beds, bedside tables, indoor and outdoor bathrooms, was unlike any tent I’d ever seen before! I soon discovered that the sun bed on the verandah was the perfect spot for a sneaky afternoon nap after a hard morning of safari. 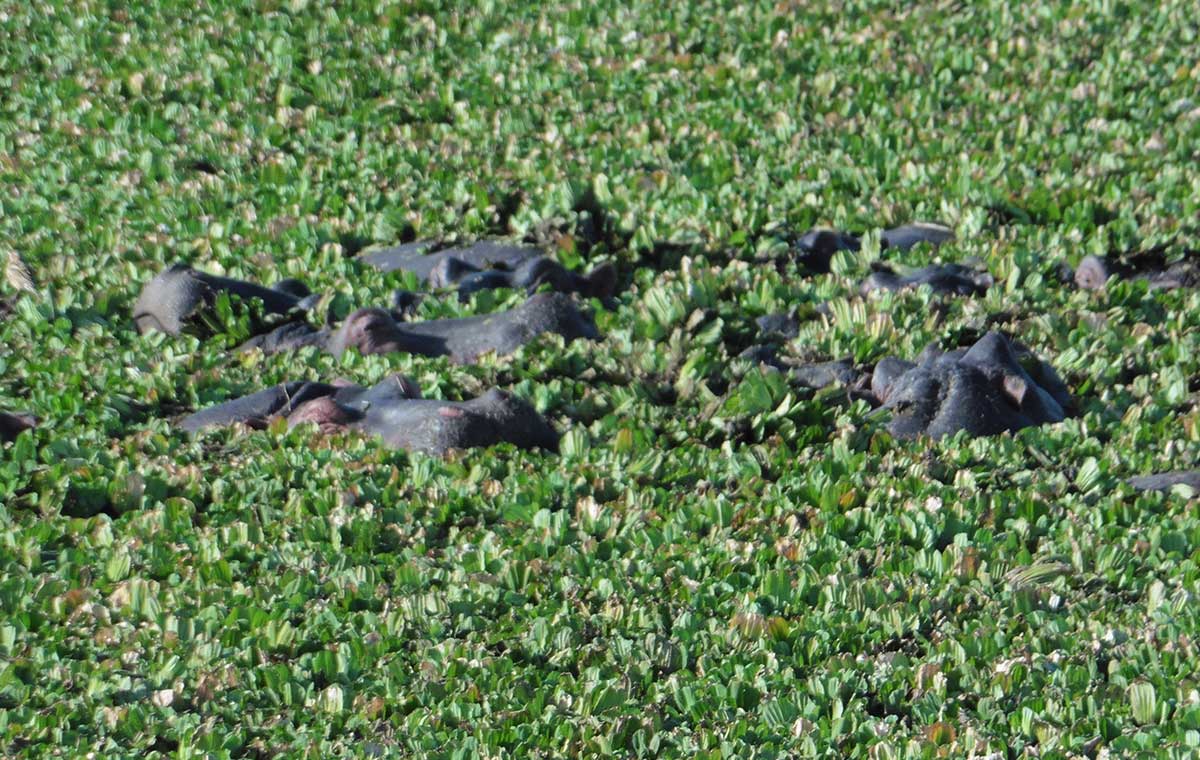 Over the next couple of days, we set out on early morning, sunset and night game drives. We saw giraffes, hippos, hyenas, elephants, buffalo, cheetahs and lions. It was exciting not knowing what we would discover next. We came across a baby giraffe learning how to reach for the high branches; two cheetah brothers lazing in the sun after a feed; and a mischievous elephant calf flapping his ears and swinging his trunk around like a helicopter. 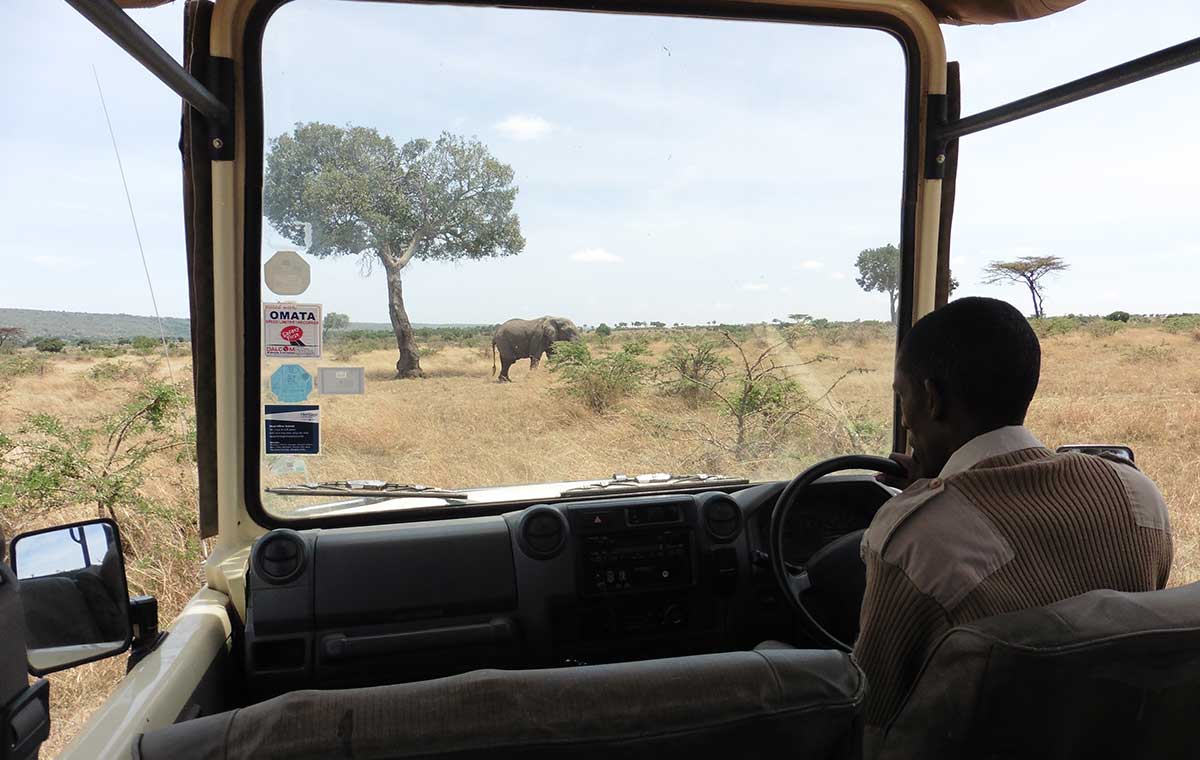 On our first full day we went into the Masai Mara National Park. The Park has different rules to the privately held conservancies. We couldn’t just drive directly to the animals or viewpoint Jackson had spotted because you must stay on the official tracks to avoid damaging the environment. Initially I was disappointed as I thought we would miss out on seeing animals because they were out of reach. I need not have worried. This was when Jackson’s expert knowledge of the area and animal behaviour came to the fore. He could see a lion or elephant herd, predict where they were heading and then drive us to the perfect spot to see them. One moment that sticks in my mind is when we saw a lone male lion striding confidently across the grasslands – away from us. Within three minutes Jackson had us sitting in his direct path and we watched him walking towards us and pass about a metre in front of the jeep. Until then I’d only ever seen despondent lions in a zoo. It was exhilarating being so close to such a magnificent creature in the wild.

Back at camp we were given a full tour to discover how they work in conjunction with the Masai tribes to conserve the environment and support the local communities. Karen Blixen Camp makes tremendous efforts to reduce their carbon footprint by bulk buying, using solar power and on-site waste water treatment. The camp provides a free school to everyone from the local village, not just children. Adults, particularly women, are encouraged to attend.

Tourism is a growing industry in Kenya and a great way for young Masai people to develop a career. The camp runs a highly regarded chef training course, teaching their apprentices the ins and outs of working in a lodge kitchen and giving them plenty of hands on experience. We spent a couple of hours cooking with them, preparing a buffet of food then sitting down to enjoy it together. It was great to get an insight into the local communities, learning about their lives and what they hoped to achieve in their careers. 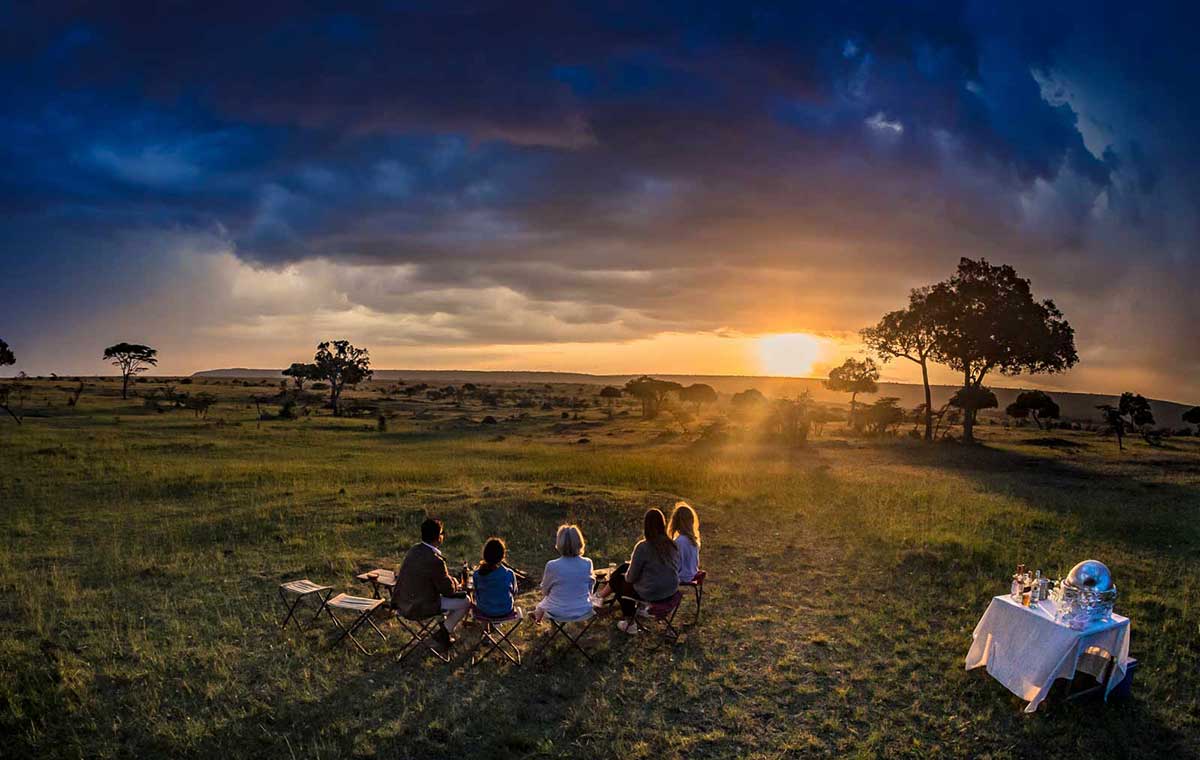 Our final night the staff coordinated sundowner drinks on a hillside in the conservancy, complete with white table cloths, bonfire and hors d’oeuvres. We watched the sun set and chatted with our new-found camp friends while curious jackals came to check out the strange visitors. On our return to camp Jackson, ever on the lookout, was suddenly so excited he was bouncing up and down in his seat. He grabbed his red spotlight and pointed at a creature I didn’t recognise. ‘Aardvark!’ Beyond being the first word in most dictionaries I didn’t know much about these elusive animals, but it turns out he hadn’t seen one for two whole years! With so many years spent living and working in the Mara, Jackson could still be surprised and excited by it. I only stayed three nights – there’s definitely more to see in this remarkable place!

You can see the African holidays we offer here.