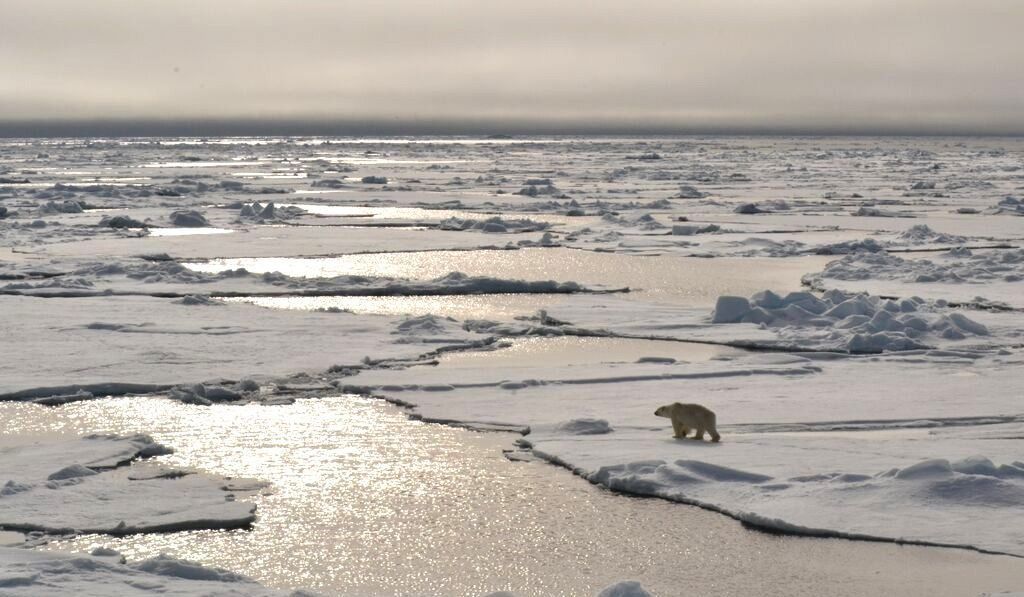 Having travelled to Antarctica a few years ago, I have been interested to head up to the Arctic and see the wildlife up there, and was not disappointed! This time I went on the Akademik Sergey Vavilov which is a former Russian research vessel and has been transformed into a passenger expedition vessel. The crew are all hardworking Russian’s and nice to deal with, communication is usually a series of head nods and hand gestures (unless you speak Russian), then followed by a laugh once the point is understood.

I travelled in early July for 10 days and we were blessed with blue cloudless skies most of the time so could see the scenery at its best, the water was calm and glassy and the glaciers and mountains overlooking the fjords were spectacular. As I travelled over this period I also didn’t see a night sky once, however the curtains in each cabin were thick and could easily darken the room so sleep was simply achieved. 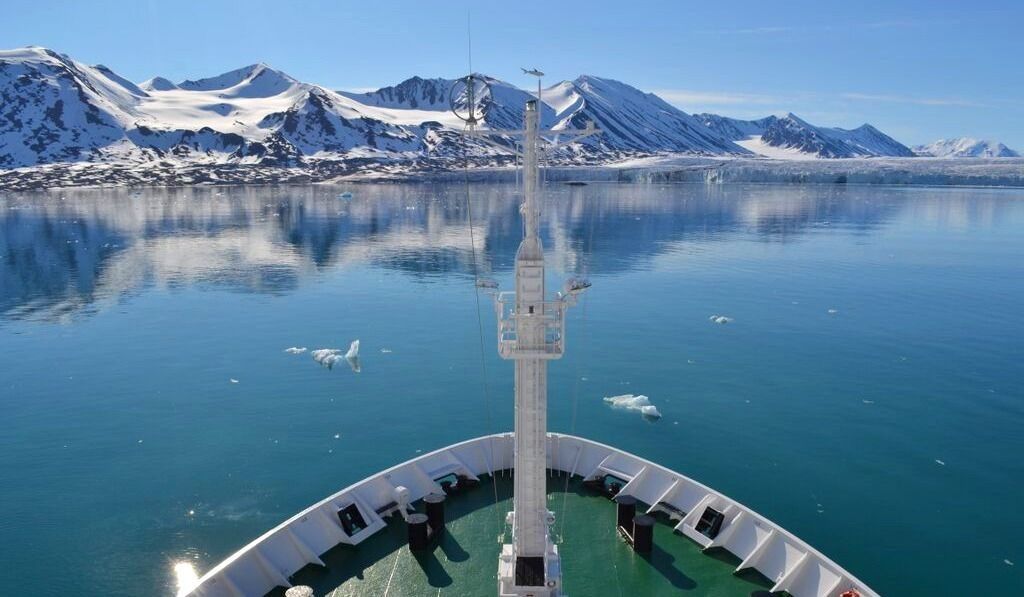 We started and finished our trip from Longyearbyen, Norway which is accessible by a 3-4 hour plane trip from Oslo. A noticeable difference between Antarctica and the Arctic is there is no open sea to cross once on the ship. As soon as you leave Longyearbyen port the ship turns left and you are amongst it straight away and the search for wildlife (Polar Bears in particular) was on. We headed north going up the coast and into various fjords to witness some fantastic scenery, huge glaciers with large carvings occurring regularly and some of nature’s other great performances.

We had 2 excursions each day which were either zodiac based or we could get onto the mainland and go for a walk to look at some of the historical sites, bird colonies, walruses, seals or other wildlife. A thorough Polar Bear check was made prior to our landings and the guides all carried rifles / flares to scare off any bears if they happened to appear near us, but we never had any encounters on land. 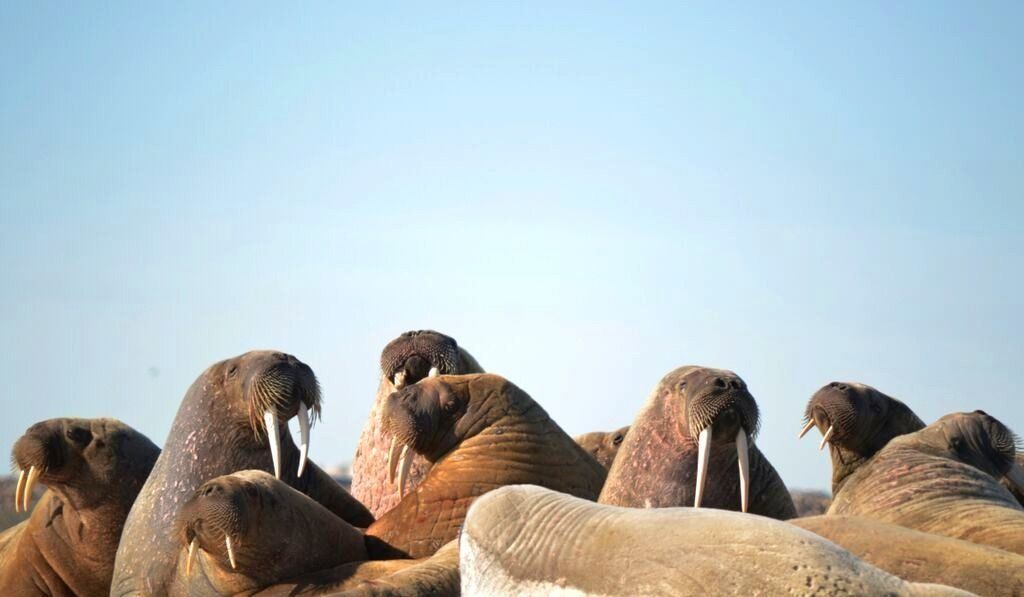 After a number of days heading north we finally get above 80 degrees and into the pack ice. All telescopes, binoculars and cameras were out to try and spot a bear and luckily for us one was found just prior to breakfast. As we quickly finished our meals the ship edged closer, carefully guided by the Russian bridge crew so we didn’t disturb the bear. Luckily for us this male bear had recently eaten so was full, relaxed and moving quite slow which gave us a chance to get close and have a nice look. We stayed here for a couple of hours until the bear had enough of us then wandered off with the remains of its recent seal catch.

Another bear was spotted in the distance and as we crept closer to this one, another male, we could see he had his nose in the air so was hungry and looking for food. He initially saw us coming and backed off a bit, checked us out then got curious with what this big white thing was that was approaching so he actually headed towards us slowly. 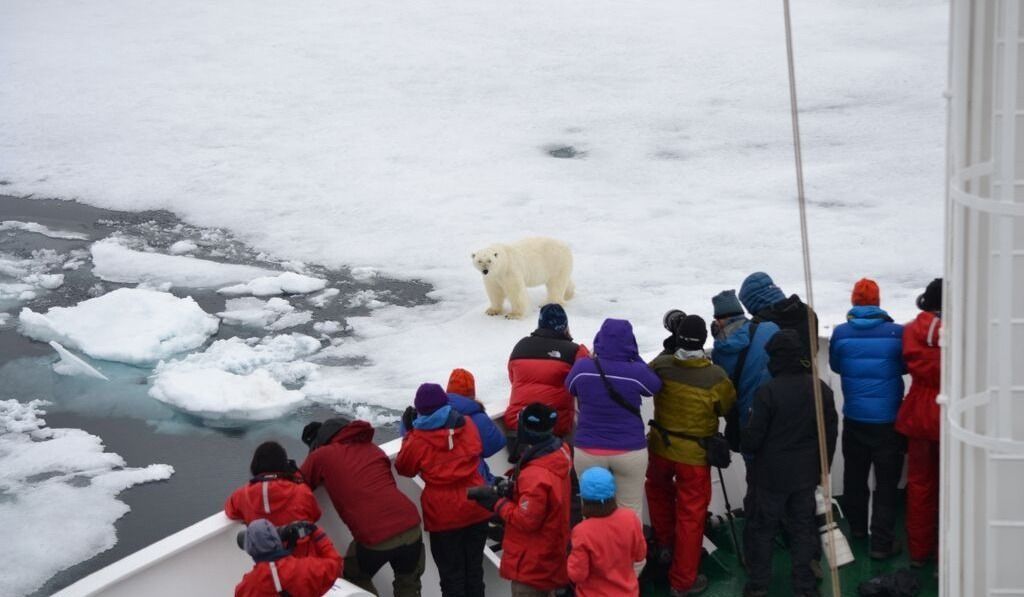 Eventually after working out he couldn’t eat the boat, he wandered off to find something else he could smell in the distance. We followed him for an hour or so where eventually tracked down a dead bird lying on one if the icebergs.

He calmly ate the bird and then to our joy he decided to get curious again and approached the ship, a lot closer this time and went directly beneath the nose of the boat. He slowly checked out the starboard side, then the port side and was really putting on a good show for us, even coming around the back so was visible from the bar for those escaping the icy Arctic temperatures. 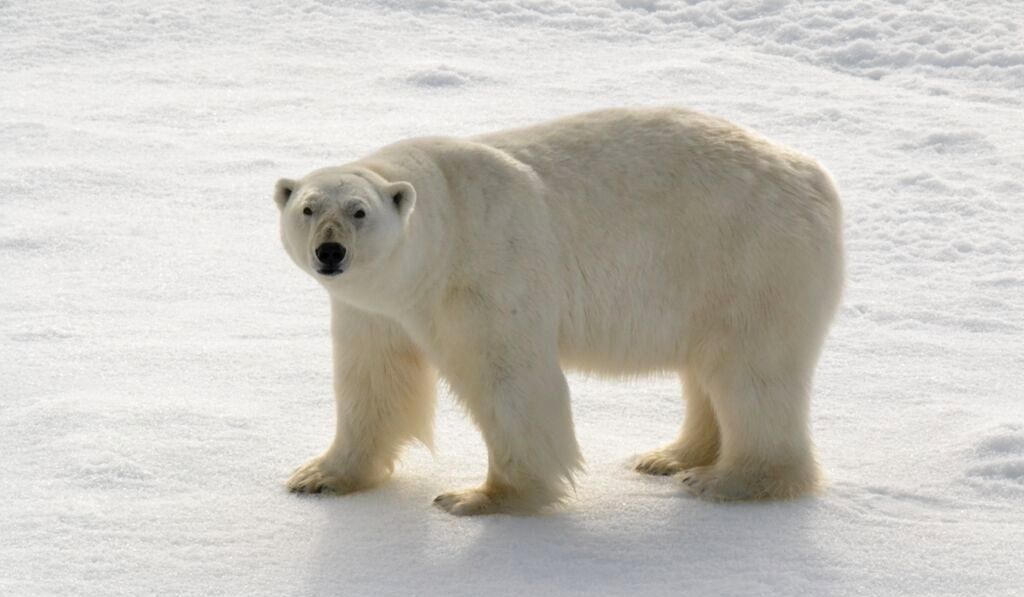 He stayed for a little longer, giving us some more time to enjoy this wonderful experience before heading off into the non-setting sun and to find a seal for dinner. It was a great day!

The following days we headed south back towards Longyearbyen, witnessing more whales, walrus, seals, birdlife and Arctic history along the way. Pretty much all wildlife was ticked off the list – Beluga whales were only witnessed by the lucky kayakers onboard.